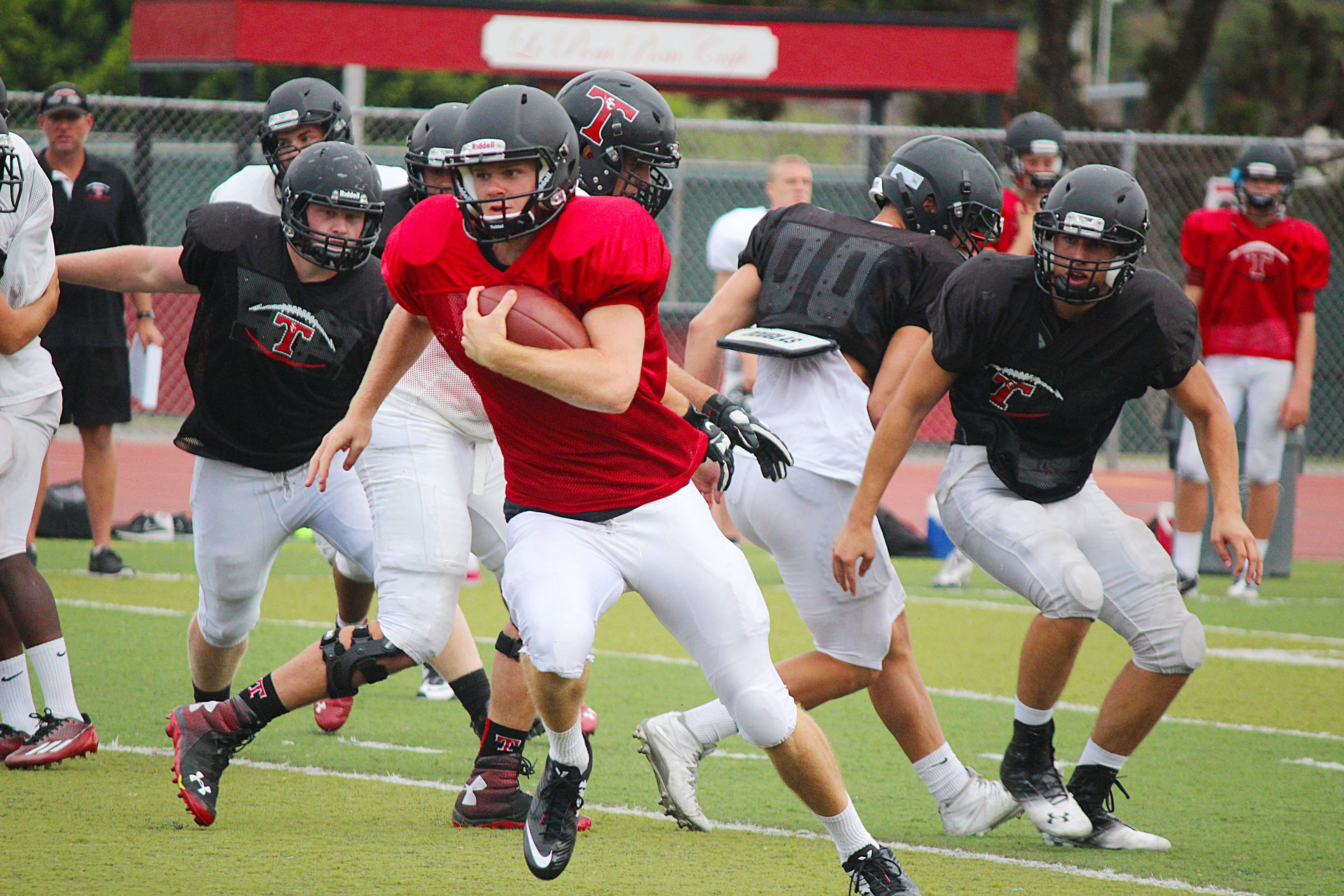 The Merriam-Webster Dictionary defines the redemption as: The act of making something better or more acceptable.

This year, the San Clemente High School football team has taken that word, and its definition, to heart, building their 2014-2015 campaign around the slogan “Operation Redemption.” After a year that saw more downs than ups, the Tritons are looking to redeem themselves in a big way heading into the new season.

San Clemente started last season with consecutive wins over Jordan of Long Beach and Cabrillo, but following several injuries to key players, their season went off the rails. They lost the next eight games and went winless in league.

The struggles of last season can be directly linked to the injury of standout quarterback Sam Darnold. Darnold earned the starting job as a junior, flashing his skill and promise as a dual-threat quarterback in the Tritons first three games. He passed for 337 yards and four touchdowns, completing 63 percent of his throws. He ran the ball 35 times, averaging 9.2 yards per carry, and rushed for five scores. The Tritons, with Darnold fueling the offense, were on a roll.

But in San Clemente’s third game against rival Dana Hills, Darnold fractured his foot, sidelining him for the remainder of the season. Other injuries up and down the roster followed, which left the Tritons in a state of flux.

The changes allowed the Tritons, who were young to begin with in 2013, to put a good amount of sophomores and juniors into the mix to gain experience and learn on the fly. When the team opens their 2014 season against Garfield at home on Aug. 29, they will field 12 returning starters, two more than they had to start last year.

With the confidence placed in their returning depth the Tritons are more determined than ever to right the ship.

“We had a tough year on and off the field last year. We had a lot of injuries and we had a hard time finishing games,” head coach Jaime Ortiz said. “Playing so many kids last year as a young group will help us this year. The kids have bought into the mindset that we have something to prove.”

The Tritons will head to the Sea View League this season, joined by former South Coast League member Trabuco Hills.

San Clemente will have plenty of returning depth on offense, starting with their offensive line. Junior Donté Harrington, a three-year starter, senior Austin Volling and junior Tucker Scott all return to help pave the way for the Tritons offense.

Ortiz likens the offense to a car and the keys to that car are being handed over to Darnold, who had a very busy offseason.

Darnold’s stock as a collegiate prospect rose exponentially over the summer. His athleticism and arm strength were on display at high-profile events like the Elite 11 quarterback competition and the Opening, where he played alongside other top recruits. Last month, he committed to play football at USC.

For Darnold, this season is very much a shot at redemption. He has started under center only five times in his high school career. Now that he is healthy and back to working with his teammates, Darnold is looking to reassert the program’s authority in southern Orange County.

“I think getting back on the map is the biggest thing for us. Winning games is all we need to do,” Darnold said. “I was more disappointed with us not winning (last year) more than my injury. I just have to stay healthy this year and we just have to win some games.”

Joining Darnold in the backfield will be the speedy tandem of junior running backs Vlad Dzhabiyev and sophomore Brandon Reaves. Dzhabiyev had a solid sophomore year, rushing for 500 yards and three touchdowns. Reaves will get his first look at real playing time this season and will add to the Tritons up-tempo offense. Ortiz says both Dzhabiyev and Reaves have the ability to run and catch out of the backfield and can be deployed as receivers in certain formations.

The Tritons will run a spread offense, which will allow Darnold to make a lot of in-game decisions when he sees fit.

“When you work with kids like (Darnold) you have to give them a little discretion and let them make some decisions. I think Sam has that ability to make the right decision and read the defense and create plays,” Ortiz said. “We’re going to move all our playmakers around the field and keep defenses guessing.”

Senior receiver Jake Russell has big-play capability and has built a strong bond on the field with Darnold, according to Ortiz. Russell will also start at cornerback on defense. Senior tight end Cole Harlow will provide a big, 6-foot-5-inch target.

The Tritons are less experienced on defense, having taken a heavy hit from graduation. They aren’t very big on the defensive side of the ball, either. What they have is speed and chemistry, according to Ortiz.

“We’re not huge on defense. We don’t have a 6-4, 250-pound defensive end,” Ortiz said. “We have a bunch of guys that play well together and we have to fly around and make plays and swarm the ball.”

The Tritons depth at linebacker got a boost in the form of senior transfer Riley Whimpey, who Ortiz feels has the potential to be an all-league type of player.

In the secondary, the Tritons will rely on the experience of Russell at cornerback and junior safety Tanner Wright.

Time will tell if the Tritons, playing in a new league, will return to form. Their shot at redemption begins at home on Friday, Aug. 29.

Read our full San Clemente High School football preview, which includes depth charts and an in-depth look at the season schedule, below: