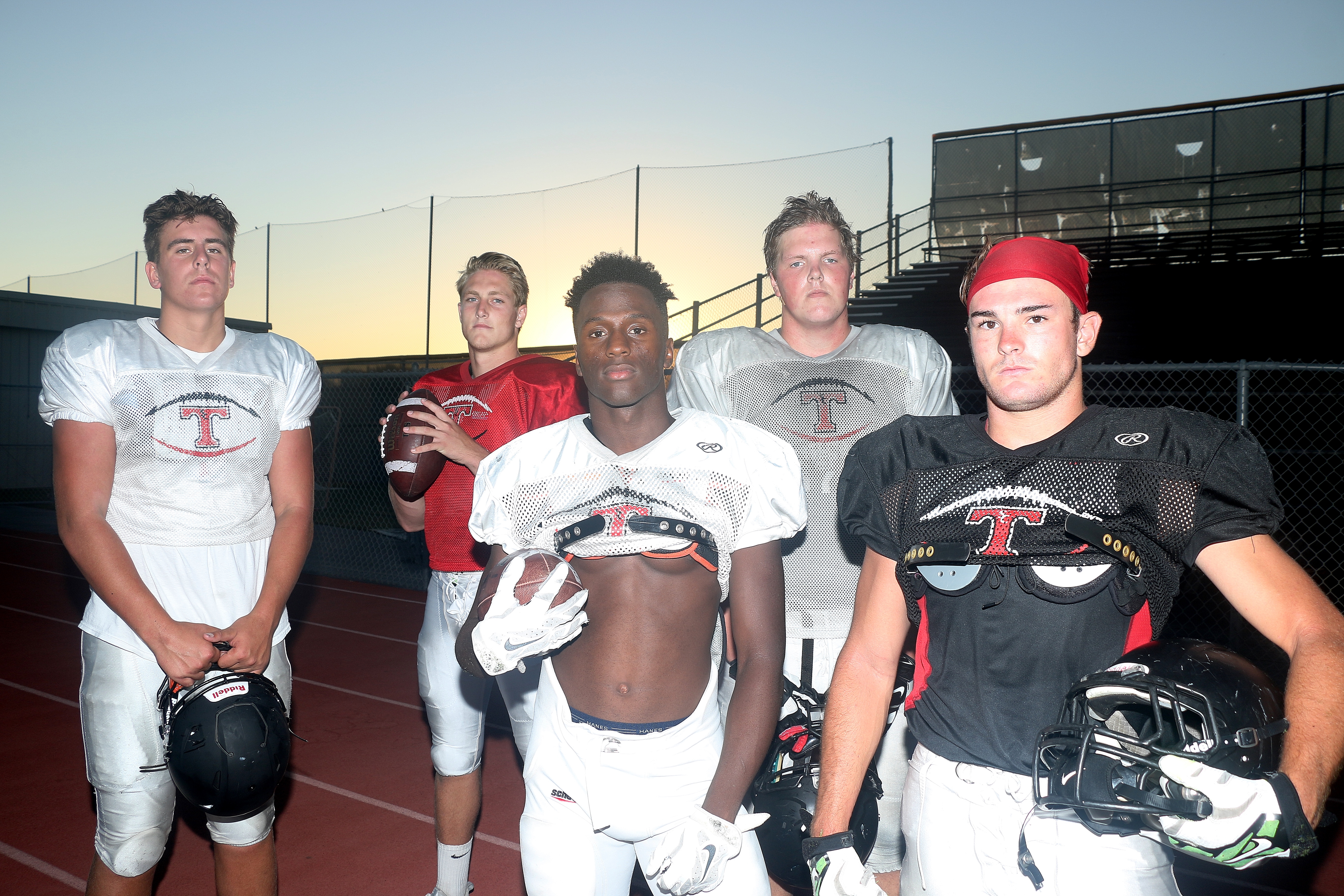 The last time the San Clemente High School football team left the field of play in CIF-SS competition, it was bedlam.

The La Habra football team and its fans were swarming the field at Cerritos College to celebrate the Highlanders last-second Hail Mary touchdown pass that clinched the CIF-SS Southwest Division Championship as the Tritons stood and watched in disbelief. It was the second consecutive season in which San Clemente lost in the divisional title game.

But the silver lining of last year’s tough-luck loss quickly revealed itself. One only had to look at the Tritons’ roster to see that the team would be in position to contend again in 2016.

“There are a lot of guys that were on (last year’s) team that got a lot of playing experience and now it’s their chance to show what they can do,” head coach Jaime Ortiz said. “I’m a big believer in ‘If what you did yesterday was big, you’ve done nothing today.’ And that’s the way these kids are kind of approaching it. It’s a new season; a new team.”

Ortiz preached the concept of “leaving no doubt” on the field to his players, and it has become their rallying cry this offseason. The team believes if they play their brand of football, which has led to so much success in recent years, their effort will allow them to remain a force in the Southland.

San Clemente returns a strong group of experienced players at crucial positions this season, and is ready to navigate its way through a difficult schedule and a return to the South Coast League.

The San Clemente offense was downright dominant last season. The team put up 20 or more points in every game, and eclipsed the 40-point margin 11 times. In the playoffs, the Tritons put up 52, 52 and 63 points in first, second and third-round victories, respectively. They even set a school record for points in a game in a 70-28 blowout against Aliso Niguel last November.

With so many dynamic players returning, Ortiz believes this year’s offense has the chance to be even better than it was last season.

Senior quarterback Jack Sears had a huge 2015, passing for 2,697 yards and 37 touchdowns. Other than his ability to make plays with his legs, Sears’ x-factor is his accuracy and decision making. Sears completed just over 71 percent of his passes last season and threw only two interceptions.

He had a busy offseason and was selected to compete in the Elite 11 Finals as part of Nike’s The Opening in July, and committed to Duke last week.

Surrounding Sears will be a large cast of playmakers.

Senior Brandon Reaves is a three-year starter that does it all for the Tritons. As a running back, he ran for 644 yards and 10 touchdowns in 2015. He also caught 43 passes for 639 yards and 11 touchdowns as a slot receiver. He even returned kickoffs and punts.

Reaves’ role will be expanded this year, and he will play both ways as a cornerback on defense.

“Reaves is one of the more explosive players in the county. Every time he touches the ball, he can score,” Ortiz said.

The offensive line will be anchored by returning senior center Turner Tonkovich and left tackle Zachary Cochrun. Cochrun made the move to the left side this offseason and continues the tradition of skilled big-men who have played the position in year’s past, a list that includes the Green Bay Packers’ Kyle Murphy and Utah’s Tucker Scott.

Swarming to the Ball

The Tritons return speed and experience on defense, especially in the secondary and at the linebacker positions.

Juniors Bryce and Branden Wilson return to play free safety and cornerback, respectively. Bryce led the team with four interceptions as a sophomore and racked up 85 tackles, while Branden tallied 65 tackles and three interceptions.

Senior linebacker Ryan Russell, who led the team with 116 total tackles last season, will lead a linebackers group that wants to play at a blistering pace. Russell, Rex, a returning All-CIF linebacker and the linebackers hang their hats on their and ability to read offenses and close in quickly.

“Our approach is really fast. We never want to be on our heels. We want to keep offenses on their toes and make plays,” Russell said.

The defensive line will be slightly bigger in size than last year, and will feature seniors Austin Moore (6-4, 220 pounds), Dayton Romo (6-1, 225) and sophomore Jack Bystry (6-1, 275), the lone sophomore who has cracked into the starting lineup.

The Tritons face a tough nonleague schedule, and it begins with a season-opening matchup against reigning CIF San Diego Section Division 1 champion Oceanside at home on Aug. 26. Oceanside is one of two CIF championship teams the Tritons will face in the first four weeks of the season, the other team being La Mirada (Sept. 16). The team’s Week 4 matchup will be against Palos Verdes, last year’s CIF-SS Western Division runner-up.

As part of the CIF-SS’ new competitive equity playoff restructuring, the Tritons were promoted to Division II this offseason. They are one of three Orange County teams in the new postseason division, and could potentially face unfamiliar opponents in the playoffs.