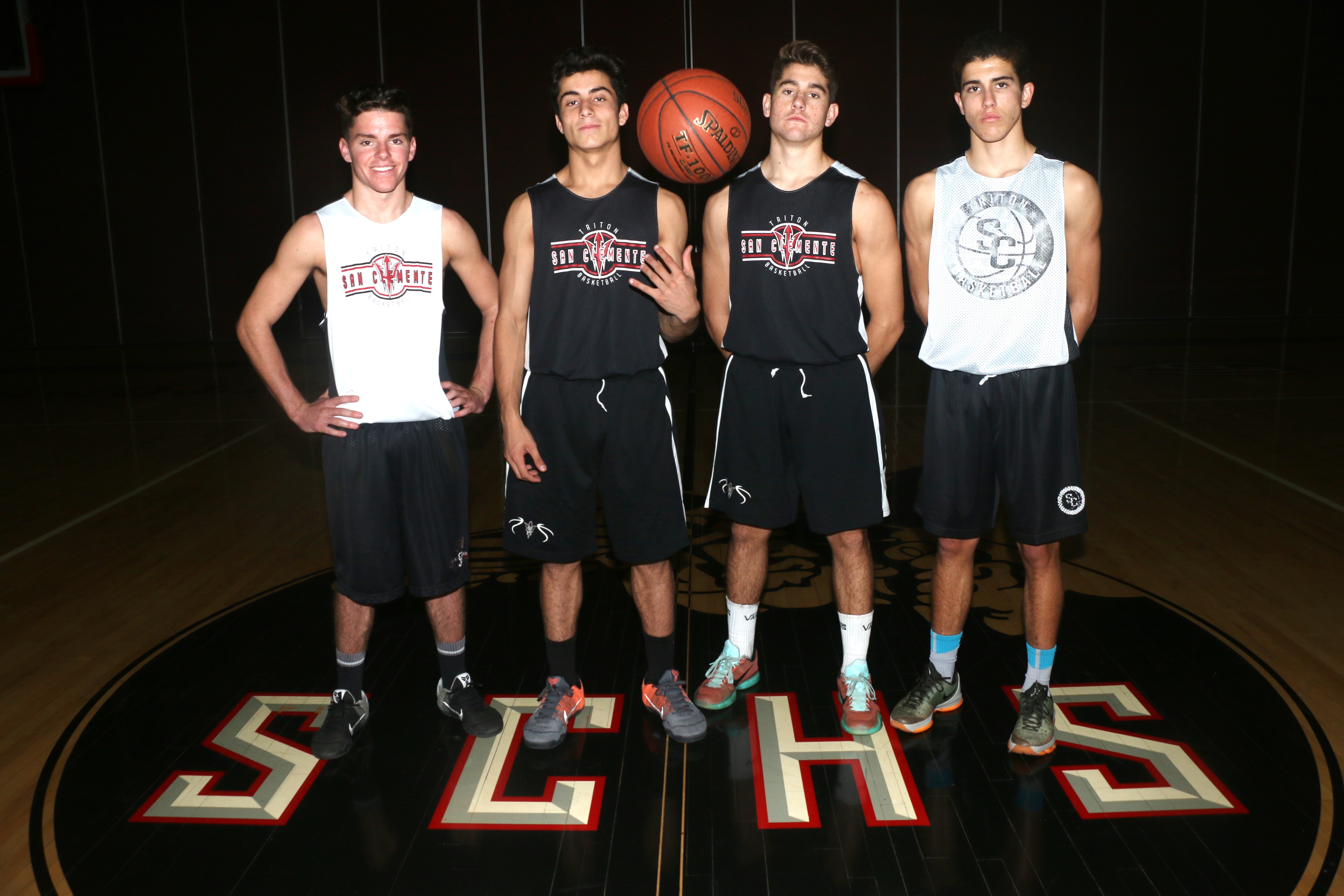 By Steve Breazeale and Victor Carno

The winter prep sports season is underway, and in our annual season preview, we get you caught up to date on all the athletic programs at San Clemente High School.

For in-game updates, scores, news and more for all of the SCHS programs all season long, follow us on Twitter @SouthOCsports.

Following the departure of several key seniors from last year’s record-setting team, the San Clemente boys basketball squad is hoping a core of returners and a mix of newcomers can lead them to an unprecedented third straight league title.

One key player from last year’s run, senior guard Blake Birmingham, is back in the mix and is poised to be the leader of the team.

Birmingham, who played in a team-high 28 games as a junior and earned an honorable All-League mention, has shown a knack for scoring, and his role on the team has expanded this offseason in more ways than one.

“He just plays with such savvy, and he plays so hard,” coach Marc Popovich said of Birmingham. “He really is a good leader too. He was able to get guys around him to play hard with him and get them to do what he wants to do.”

The Tritons also return impact forwards Isaac Rex and Chris Kane, who stand at 6-foot-6 and 6-foot-5, respectively. Senior forward Michael Moran (6-3) returns and has improved dramatically on both ends of the floor, Popovich said. All three players will help make up a dynamic and athletic frontcourt.

San Clemente is off to a 3-2 start, but the team that has appeared on the courts will look different than the one in coming weeks. Several projected starters, like Rex and Kane, are busy playing for the football team in the postseason. —Steve Breazeale

The Tritons girls water polo team has seen so much success in recent years that a promotion to the CIF-SS Division 1 was inevitable. San Clemente reached the Division 2 finals and the semifinals in 2014 and 2015, respectively, prompting their placement in the higher division after the CIF-SS realigned its playoff divisions this offseason.

Several players from last year’s team that appeared in the CIF-SS semifinals return, including senior attack Tera Richardson. Richardson, who will be a focal point on offense, scored 67 goals and recorded 34 assists as a junior.

Several freshman have broken into the starting rotation for the Tritons, including two-meter defender Savannah Burns, Caroline Christi and Grace Pelky.

The mix of veterans and newcomers will give the Tritons a dynamic approach on offense.

“We’re going to go to the counter (attack) a lot,” coach Logan Powell said. “We’ve got a couple girls that are disciplined and will swim hard and do what’s asked of them in a team concept.”

Last season, the Tritons could not get past a talented El Toro team in South Coast League play. The Chargers, who claimed the Division 2 crown, defeated the Tritons in two matches. El Toro has graduated a large group of players, and the Tritons are poised to make a run at a league title. —SB

Stepping into some pretty large shoes, former San Clemente girls soccer assistant coach Lauren Leslie will be serving her first season as head coach after longtime coach Stacey Finnerty stepped down from the position last year. After five years of being an assistant, it is safe to say that Leslie is more than familiar with this Tritons group.

After Finnerty saw the team through a record of 12-5-6 and brought them to the second round of the CIF-SS Division 1 Championships last season, keeping in line with Finnerty’s techniques may prove to offer this team success once again.

“(Finnerty) always emphasized being united as a family,” Leslie said. “Not only am I adopting her coaching techniques, but I am really looking to impart some real life lessons onto these girls.”

Having four senior captains this year, including goalkeeper, All-American, and UCLA commit Lauren Brzykcy, Leslie feels that this mature group of players is capable of adopting more layered and complicated play styles.

In order to accomplish this mashing of high school and club play, the girls are focusing on keeping possession of the ball longer by layering their passes and maintaining their high tempo and speed throughout matches, Leslie said.

Seniors Ellie Winkelman (midfield-forward), Franny Viera (defense) and Amanda Cruz (forward), along with Brzykcy, have been named captains and are leading the team in the early going.

San Clemente (3-0-1) is off to an undefeated start to its season, as of Dec. 7, with wins over Mission Viejo and Long Beach Poly. —Victor Carno

The San Clemente wrestling team may be short on experience, but several top returners and a determined work ethic have them primed for the new season.

San Clemente will be led by impact wrestlers Hunter Gallaher, junior Joshua Tabb and sophomore Jadon Arnelas. Also returning to the fold is senior Kyle Marshall, the fifth-ranked wrestler in California in the 197-pound weight class. Marshall, a CIF State tournament qualifier in 2016, has moved up two weight classes this offseason and figures to be one of the team’s marquee wrestlers.

San Clemente has a relatively young roster, and finds itself in the competitive South Coast League yet again. The Tritons will have to compete with Laguna Hills and Trabuco Hills for the dual league title. In the CIF-SS preseason coastal division rankings, Laguna Hills and Trabuco Hills were ranked fifth and sixth, respectively, while the Tritons came in at No. 7 in the division.

“We’re going to do what we can and try and be competitive (in league),” head coach Mark Calentino said. “But you can tell how willing this group is to learn; they’re willing to raise their hand. … It means it matters to them, and if it matters to them then the technique will get better.”

In its second season, the Tritons girls wrestling team is shaping up to have another successful year. Three of the four wrestlers from last year return, including junior Liliana Carteno Dzul, sophomore Amara Devericks and sophomore Carolina Moreno. All three qualified for CIF Prelims last season, and Devericks and Moreno, who both placed third in their weight class at Prelims, qualified for CIF Finals. Devericks came one win away from placing at the CIF State Championships. Freshman Payton Swank, an Orange County Summer League champion, and six newcomers join the team. —SB

San Clemente boys soccer head coach Mike Pronier had a problem, albeit a good problem for a coach to have, this offseason. His team was slated to return 15 players from last year’s South Coast League champion team, which meant there were very few roster spots available for incoming talent.

After making what the longtime coach described as “one of the toughest jobs” he’s had to do in his tenure, Pronier’s final roster is loaded with veterans that is poised for another successful run.

San Clemente captured the league title last season thanks in large part to its effort on defense, which allowed just one goal over its final five games to clinch the title. Returning to lead the group this season are seniors Rodrigo Ramirez and Braden Zines, the reigning South Coast League co-MVP.

Speedy midfielders Taylor Herrod and Jonathan Payan, along with central midfielder Michael Saba, return. Senior Fernando Vasquez will look to be a goal-scoring playmaker at the forward position.

While San Clemente won the league title outright last season, they had an early exit in the first round of the playoffs, which is a hurdle Pronier says the group wants clear come February.

“There’s a lot of experience (on the team), and I’m waiting to see who really steps up,” Pronier said. “There’s a lot of room to raise the bar this year and I think the kids can do it if they want to.”

This veteran San Clemente team will be tested early, as they play host of the Lotto Sport Western Showcase tournament Dec. 8-10. The annual high-profile tournament will feature teams from Florida and Arizona, along with top Southland powers like Loyola and Servite. San Clemente opens its tournament bid with a game against Auburndale of Florida on Dec. 8 at 7:45 p.m. —SB

When she looks to her bench, San Clemente girls basketball second-year head coach Kerri Husbands doesn’t have to worry about a drop-off in talent or drive. The Tritons return plenty of starters and contributors from last season who have experience, and the team’s depth chart is deep.

Not only can the Tritons (2-2) run nine or 10 players deep off their bench, they are also a smart group in the classroom as well. Last season, the Tritons carried a non-weighted team GPA of 3.67.

“(Their academic strength) transfers on to what we do on the basketball court,” Husbands said. “They’re really a cerebral group. I can throw a lot at them and they can process it fast and they’re smart. They’re always thinking.”

San Clemente owns a 2-2 record as of Dec. 7, and has been led by seniors Emma Borie, Amy Harris, and Taylor Johnson. Harris, a forward, was named an all-tournament selection at the South Coast Classic tournament at University High School last week.

Two freshmen, center Ella Gardiner and guard Esther Mafouta, are primed for breakout seasons, according to Husbands. Senior guard Rylee Grant transferred from JSerra and will be eligible in January, which will only add to the team’s depth.

Another feather in the Tritons’ cap is their size and versatility. Husbands described how the Tritons run a free-flowing offense that lets players swap roles on the court and play any position, and every player has the ability to handle the ball and ignite the offense. —SB