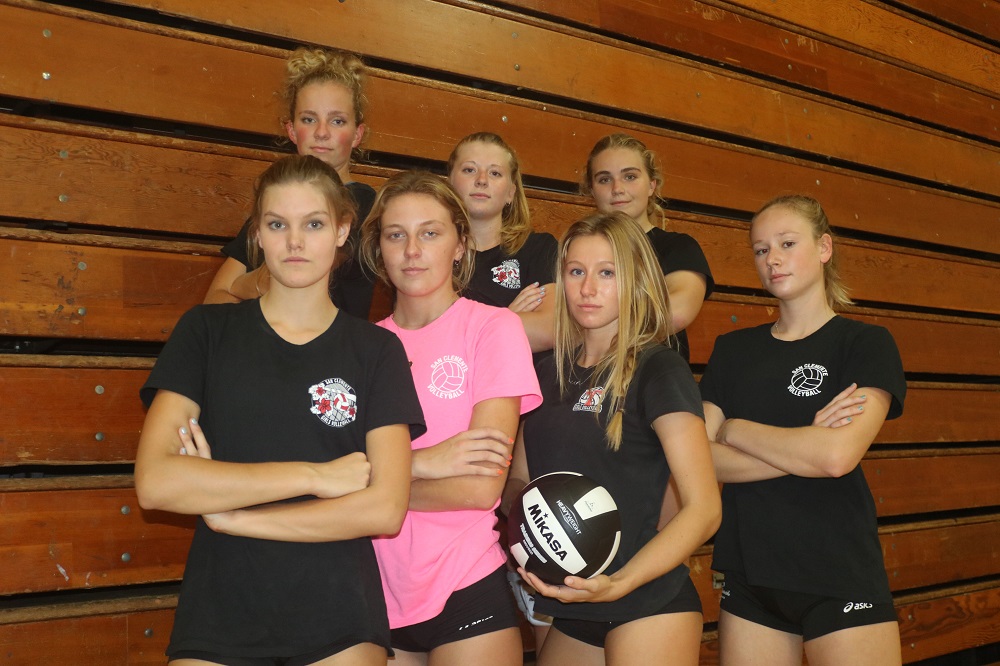 The 2018 fall high school sports season is well underway as the CIF calendar moved up across the board. In our annual season preview, we get you caught up on how the Tritons have fared early on and their outlook for the rest of the season.

For in-game updates, scores, news and more for all of the San Clemente High School teams, follow us on Twitter @SouthOCsports.

A new head coach and a new league has the Triton girls volleyball team on the rise early in the season.

Casey Swenson takes over a San Clemente team that enters the reorganized Sea View League after a winless South Coast League campaign a year ago.

Swenson is a 1998 San Clemente High School (SCHS) graduate and has been in the Triton volleyball program on the boys and girls sides since 2004. He was the boys frosh-soph coach last season.

“It’s been overwhelmingly positive and encouraging,” Swenson said of the transition. “The girls are all really excited. They’ve all had this amazing work ethic and attitude about the whole transition and me coming in new. I’m not totally new because I’ve been coaching here for a number of years, but none of them have played for me before.”

“I think we’ve definitely grown and expanded a lot,” junior Lexi Gruszczynski said. “Our game has improved a lot from last season. I think with how the season is going so far, we’re very confident in our abilities that we can finish a league game and do really well in it.”

San Clemente opened its season with a strong five-set win at Trabuco Hills on Aug. 15 and followed up that performance by going undefeated and winning the Tesoro tournament. The Tritons also picked up another big road win at Laguna Beach on Aug. 27.

San Clemente was 8-4 entering its league opener against Mission Viejo on Wednesday, Sept. 5. Results were not available at press time, but Swenson believes his balanced and deep group should compete for a league title and a playoff run.

“I think it’s exciting,” Swenson said. “I like winning. I like being a part of winning and helping these girls get that back, bring in some of that culture of what San Clemente volleyball is all about. I think that’s the whole reason we do this is to compete.”

However, when the CIF-SS released its preseason “teams to watch” list, the Tritons were not listed. Their rivals, Dana Hills, were listed in the Division 1/2 group and South Coast League newcomer San Juan Hills was listed in Division 4.

CIF may not have officially listed them, but the 2018 Tritons are still very much a team to watch.

With a tough South Coast League and a brutal Division 1/2 grouping, Powell said the difference won’t be their offensive firepower, but the players’ determination to be a defensive force.

Hosea leads the Tritons through two games with five goals and four assists, and Matson has three goals and an assist. Junior Erick Prussak has two goals, two assists and six steals.

The Tritons play at Division 1/2 team to watch Foothill on Sept. 14 before opening league play with a home match against Dana Hills on Sept. 18.

Neither team is terribly pleased that it has to share with the other, and each will look to change that and claim the title for their own this season.

San Clemente lost two of its top three singles players to graduation last season, and junior Jenna Yeam will take over as the Tritons’ No. 1.

Yeam and graduated senior Sami Neilson won the South Coast League doubles title last season and advanced to the CIF-SS Individual Championships. As a team, San Clemente advanced to the second round of the CIF-SS Division 1 playoffs.

San Clemente opened the season on Tuesday, Sept. 4, at Corona del Mar, but results were not available at press time. The Tritons open league at Aliso Niguel on Sept. 18 and host Dana Hills on Sept. 20.

League Finals will be Oct. 24 at Laguna Niguel Racquet Club.

The Tritons finished third in the Sea View League last season, but San Clemente advanced to the CIF-SS Division 1 finals for the 10th consecutive season.

The face leading San Clemente into the next decade is junior Hana Catsimanes. Catsimanes is the two-time reigning 1,600-meter league champion during the track season and will be the Tritons’ No. 1 heading into cross country season.

Catsimanes won her season-opening race on Sept. 1 with a time of 17:37 at the Great Cow Run in Cerritos.

Junior Belle Sachse will also be a leader for the Tritons, and sophomores Ella Horton and Kelsie Yamano return with varsity experience.

Coach Dave Proodian also said there is plenty of young runners in the program that are improving and could make some impact for the varsity squad this season.

The positive is that the Tritons’ top five runners from last year’s finals were all juniors, finished in the top 25 and return as seniors with that extra bit of experience.

Elijah Sech finished second individually at league finals with a time of 15:13. He advanced to the CIF-SS preliminaries where he ran a time of 16:11.

Patrick Riley was the other Triton to finish in the top 10 of league finals at 15:30. Sech and Riley are joined by Walker Redmond, William McNee and Caleb Mettler as returning seniors.

San Clemente is coming off of a South Coast League title last season and will face stiff competition from rival Dana Hills.

San Clemente won in its opening week against Capistrano Valley, 197-261, but was downed in its second week by Santa Margarita, 195-206.

San Clemente will host Dana Hills at Bella Collina on Oct. 9, and the Dolphins will host San Clemente at Monarch Beach on Oct. 11.