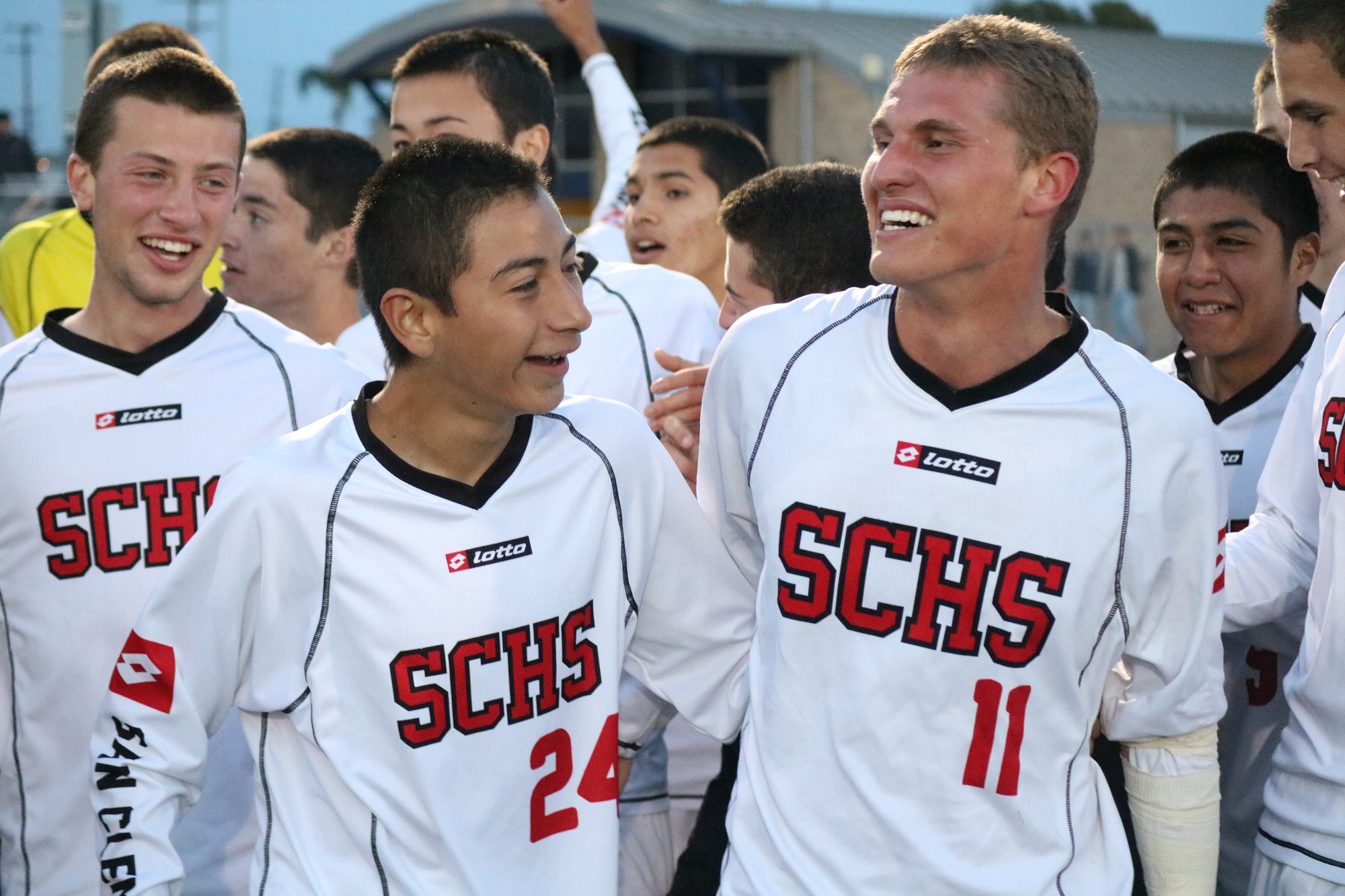 As we count down the days to the holidays, the winter sports season is well underway across the CIF-Southern Section.

In our annual preview, we highlight all of the winter sports programs at San Clemente High School from the court, to the field, to the pool and to the mat, as the Tritons enter the tournament season while looking ahead to league play on the other side of the new year.

The San Clemente boys basketball team has gotten off to a strong start to open the 2019-20 season.

The Tritons are 6-3 (as of press time on Wednesday, Dec. 11), which is already halfway to their win total from last season.

“Really happy with where we are right now,” San Clemente coach Marc Popovich said. “The biggest thing has been our defensive effort. We’ve done a good job of guarding people, and our effort to be better on the glass has really improved.”

San Clemente alternated big margins of victory with tighter games over a five-game win streak that has the Tritons on a better pace than some early projections. Popovich called their 73-69 win over Newport Harbor in the Godinez Grizzly Tournament the best win so far for San Clemente.

“I think we’ve gotten a couple wins people thought we wouldn’t get,” Popovich said. “As far as where we’re at, we’re about where we thought we would be. We’re getting better every week. This group has been committed to the growth.”

Senior Max Rumph and junior Jack Carroll have been the key contributors to the Tritons’ start. Popovich said that the rest of the team has stepped up and played their roles.

“There’s a lot of first-year varsity players that just don’t have that experience,” Popovich said. “This part of the year is super key for a kid like Cameron Kooper, who’s been really good as the starting point guard. He just needs experience and reps.”

San Clemente is currently competing in the Gary Raya SoCal Elite Tournament this week at Portola and Northwood High Schools in Irvine. The Tritons round out the tournament season in the North-South Challenge against Corona del Mar on Dec. 20 at Tesoro and in a tournament in Utah after Christmas.

Then comes the daunting but familiar task of the South Coast League.

“One through five, we’re the deepest league in the county, outside of the Trinity,” Popovich said. “Any team can beat anybody. You have two teams in Capistrano Valley and Mission (Viejo) that are top 10 in the county, but I don’t think anybody else in our league thinks those two are unbeatable. Not afraid to play against each other at all.”

San Clemente opens league play at home against Aliso Niguel on Jan. 8 and plays at Capistrano Valley on Jan. 10. The Tritons will also host Dana Hills in a Coast View Conference crossover rivalry game on Jan. 22.

The San Clemente girls basketball team is set up for success, and that’s bearing out in the early results.

The Tritons are a perfect 7-0 with a strong returning nucleus and an exciting new addition.

The headlining returner is senior Ella Gardiner, who averaged a double-double last season with 16.8 points and 12.3 rebounds and blew past 1,000 points in her Triton career. Gardiner nabbed her 1,000th rebound earlier this season to secure her place as one of the best San Clemente basketball players of all time.

Sophomore Jolie Johnson also has been an important player early on for San Clemente after making an impact as a freshman.

Junior Jessie Blaine joins the Tritons as a transfer from Virginia. As part of a military family, Blaine has moved frequently, with San Clemente being her third high school in three years. Blaine is committed to Auburn for softball and helped Team USA win softball gold at the U17 Pan American Games this past summer. Blaine has been one of the Tritons’ top scorers along with Gardiner this season.

Ranked No. 3 in CIF-SS Division 2A, the Tritons feel on track to try and go beyond what they accomplished last season.

San Clemente finished second in the South Coast League last season with only two losses, both to champion Aliso Niguel, and the Tritons fell in the first round of the playoffs.

San Clemente is currently in the Artesia Lady Pioneers Winter Classic and will take part in the SoCal Holiday Prep Classic after Christmas.

For the first time in program history, the Tritons captured the South Coast League title, CIF-SS championship and CIF Southern California Regional title all in the same season.

With San Clemente losing its top four goal-scorers, leading defender and both goalkeepers from that team, it would be seemingly unfair to compare the 2019-20 Tritons to the 2018-19 version.

Yet, here they are, No. 1 in the first CIF-SS Division 1 poll to open the season and already playing strong.

“As we’ve played a couple games, the young talent needs to mature and strengthen up a little bit,” San Clemente coach Mike Pronier said, “but they’re all pretty good players. I don’t know if we have Tristan Webers (2018 Gatorade State Player of the Year) and Blake Bowens (2019 Gatorade State Player of the Year) running around, but there’s some good players out here.”

San Clemente isn’t operating at full power yet, either. Because of club team commitments, top returners Daniel Tuscano, a Westmont commit, and Micah Usui have not played yet, nor has Asa Gibson, a UC San Diego commit who has come back into the program.

Pronier said he wasn’t initially sure about his defensive group, but after a strong summer, the team is playing cohesively on the back end early on.

As they were last season, the Tritons have another pair of seniors in net with Carter Fann and Connor Stoll.

This weekend, San Clemente hosts its annual tournament, the Lotto Sport Western Showcase, which is once again packed with talent. The Tritons open on Thursday, Dec. 12 against Kapolei of Hawaii, which finished third in the Hawaii state championships last season.

The San Clemente girls soccer team has a new leader at the helm.

Marco Spaccini takes over as head coach of the Tritons after a year and a half as an assistant coach for the varsity squad.

Spaccini succeeds San Clemente alumnus Lauren Leslie, who stepped down after three seasons after being selected to play for the first-ever US Soccer Women’s National Beach Soccer Team.

Under Leslie, the Tritons finished second in the South Coast League three times and made the CIF-SS playoffs each season. Spaccini will be tasked with coaching up San Clemente to try and break through Aliso Niguel’s recent dominance in the league.

Early on, the Tritons are 1-0-1, with a 2-0 win over Capistrano Valley and a scoreless draw against Edison. San Clemente opened the Mater Dei Tournament against Foothill on Wednesday, Dec. 11, but results were not available at press time.

Senior Piper Biolos scored both San Clemente goals against Capistrano Valley, with one assist by senior Jewel Craft. Freshman goalkeeper Rylie McLeish has been in net for both shutout performances.

San Clemente has nine seniors on its deep roster.

Last season, the San Clemente girls water polo team dominated the South Coast League for its third straight title and advanced to the CIF-SS Division 2 Final, its first since 2015.

While the Tritons did take big graduation losses with two of their top three scorers and starting goalie moving on, San Clemente is still set with a deep roster to try and equal or surpass last season’s accomplishments.

“We have a group of seniors and juniors that have played together for a long time,” San Clemente coach Logan Powell said. “Six of them have played here since 12-and-unders, and all of them contribute in different ways”

San Clemente is 2-1 on the season and hasn’t shied away from top competition. The Tritons are out early to prove their place in the rankings and secure a spot in Division 1. The top eight teams in the combined Division 1 and 2 poll will play in the Division 1 playoffs with a guaranteed three games to determine placing from first through eighth.

“We’re going to try and win as many games as possible, right?” Powell said. “So, the more games we win, the more chance that we’re in D1. In some respects, it’s great for the program and great for the girls to go to the finals in D2, and it can kind of be downplayed, but even eighth in Division 1 is a huge accomplishment.”

The Tritons next play at No. 7 Newport Harbor on Dec. 12 and will have plenty of tournament games between then and scheduled nonleague games at home against No. 2 Foothill on Jan. 6 and No. 17 Huntington Beach on Jan. 8.

San Clemente opens the one round of South Coast League play at Aliso Niguel on Jan. 16 and closes at rival Dana Hills on Jan. 30, with the league tournament to follow.

The San Clemente boys wrestling team went undefeated through the Sea View League last season and advanced to the semifinals of the CIF-SS Division 4 dual meet championships on the back of a strong group of seniors.

The strong tradition of Triton wrestling looks to continue despite those graduation losses.

San Clemente is ranked No. 8 in the CIF-SS Division 5 dual meet poll, and the Tritons have had good early tournament showings.

San Clemente won the team title at the Costa Mesa Classic on Nov. 23 with strong across-the-board results. While the Tritons didn’t make any of the final matches, they got three third-place finishes: by Ryder Mortensen at 145 pounds, by Chris Merkleat 171 pounds and by Robert Maley at 195 pounds. The Tritons also racked up points with five fifth-place finishes and a seventh-place finish.

San Clemente hosts its annual tournament on Jan. 18 as a lead-up to the Coast View Conference Championships on Jan. 25 at Aliso Niguel.

The San Clemente girls program continues to grow coming off of a successful 2018-19 season.

At the Rumble in the Realm tournament on Dec. 7 at Foothill High School, Bonilla took third place at 150 pounds, and Ajoleza earned fourth place at 131 pounds. Ibarra took third at 137 pounds.

San Clemente will wrestle in the Santa Ana tournament this weekend and in the Blackwatch Tournament on Dec. 28 at Upland High School.

The Tritons take on Tesoro in a dual meet on Jan. 16 and compete in the league tournament on Jan. 25 at El Toro High School.