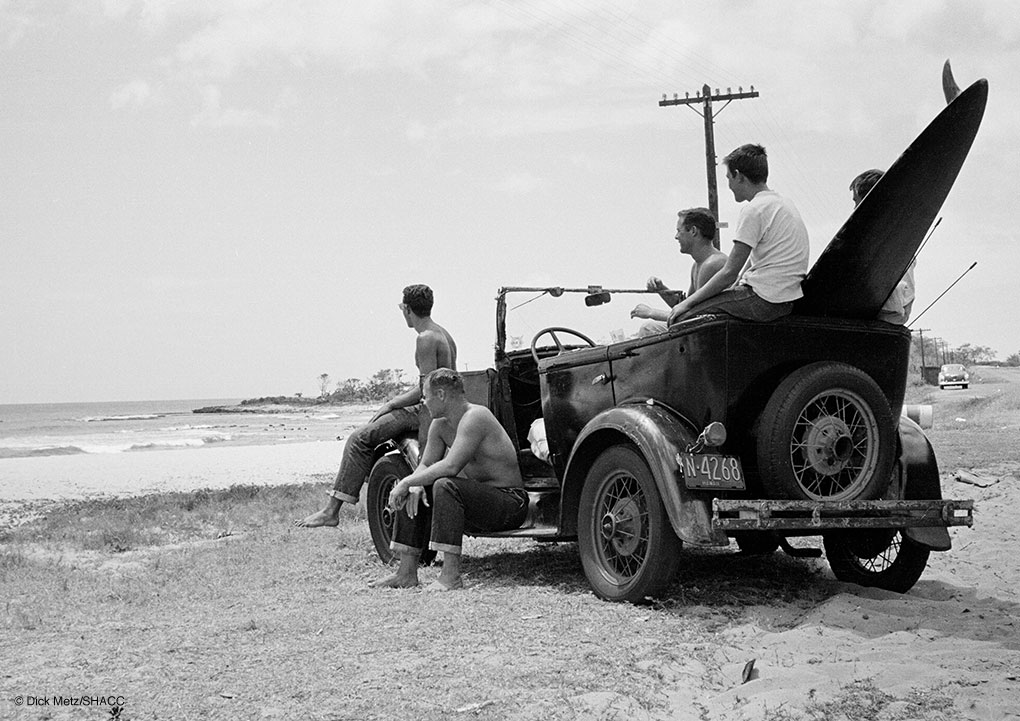 Ever since the first surfers dreamed of lonely waves reeling off on some faraway reef, the desire to push beyond the horizon has been a driving ethos of the sport and culture, according to the Surfing Heritage & Culture Center. From surf exploration’s birthplace in Hawaii to the American mainland, then to Australia, Europe, and so on and so forth, it’s been an amazing ride.

This year, the SHACC’s annual Ohana Gala will be celebrating the adventures and achievements of five of surfing’s most notable explorers: Dick Metz, Craig Peterson, Kevin Naughton, Martin Daly and Liz Clark.

In 1958, Metz hopped a freighter from California and landed in Tahiti. From there, he went on to explore the South Seas, Australia, Europe, eventually landing in Africa, where he stumbled on a point called Cape Saint Francis. Born in Laguna Beach in 1929, Metz is one of surfing’s true pioneers. He was a power player in the rise of the Hobie empire and is the cofounder of SHACC.

And when it comes to falling off the radar, few have done it better or with more commitment than Kevin Naughton and Craig Peterson. Two friends from Orange County, their adventuring through the 1970s and ’80s, and the stories and images they somehow relayed back to SURFER Magazine, embodied and defined unbridled, go-for-broke surf exploration.

A salvage diver by trade, a surf explorer by fate, at the helm of the infamous Indies Trader, Captain Martin Daly plotted surfing’s course through the secret wave garden of the Mentawais Islands in Indonesia throughout the 1980s and ’90s. These days, you’ll find him and his boat deep in the South Pacific, where the Marshall Islands have captured his imagination. But that’s another story.

When Captain Liz Clark was 7 years old, she learned to sail on a little red dinghy in San Diego Harbor. Since first setting sail aboard her boat, Swell, Clark has logged more than 18,000 miles on the high seas. She’s a vocal and visible advocate for the environment and ocean health. And she’s also the author of Swell: Sailing the Pacific in Search of Surf and Self.

SHACC’s 2019 Ohana Gala will take place at the newly renovated Huntington Bay Club in Huntington Beach on June 15. As part of the evening’s festivities, which serve as a fundraiser for SHACC, the honorees will regale the crowd with their stories of adventure and discovery. All of the honorees will be introduced by notable VIPs, including former Quiksilver boss Bob McKnight and photography legend Jeff Divine. Captain Daly’s flying in from Indonesia, and Captain Clark from Tahiti, just for the event.

There will also be one-of-a-kind surf travel packages available on the auction block, so not only will you hear some of the greatest surf stories ever told, but you can go live the dream, too. Tickets and sponsorship opportunities are still available.

For every surf break around the world, somebody had to be the first person to tempt fate and push over the ledge. Thanks to those pioneers and pirates, adventurers and explorers, without their barefoot accomplishments and contributions, surfing wouldn’t be the rich bold tapestry of color, cultures and experiences that it is today. A tip of the cap to all of those who have given surfing the stuff of dreams.