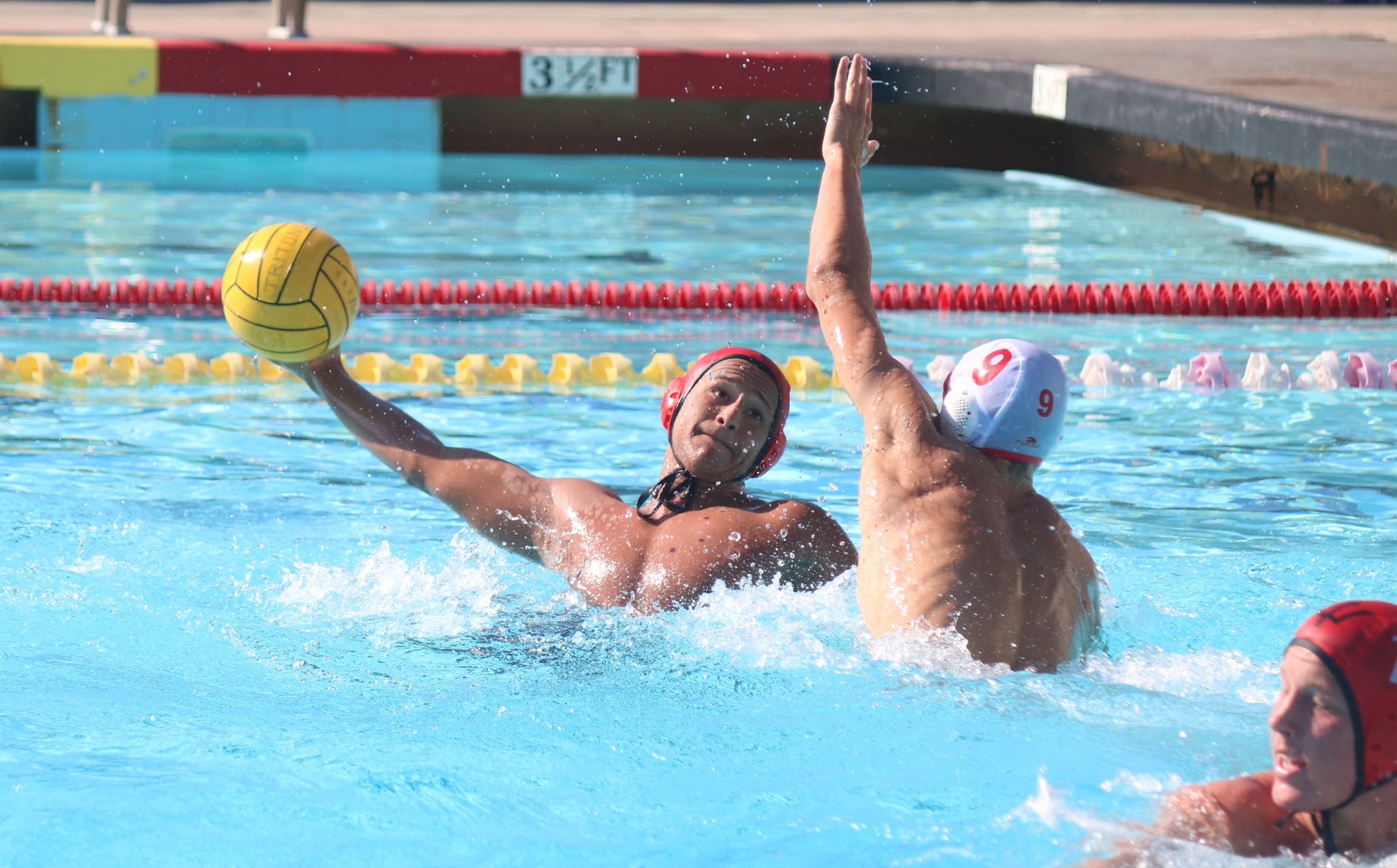 2019 Triton Fall Sports Preview: SCHS Teams Look to Repeat as League Champions across the Board

The 2019 fall high school sports season is underway, with every team returning to action as of last week. In our annual season preview, we get you caught up on how the Tritons have fared early on and their outlook for the rest of the season.

All the elements are there for a huge season for San Clemente boys water polo.

San Clemente brings back nearly all of its impact players at the biggest impact positions as experienced seniors.

Suffice to say, the Tritons are motivated to prove themselves in what is the highest level of high school water polo in the country.

“We’re another year older,” San Clemente coach Logan Powell said, “a year bigger, a year stronger, more experience. Now the theme is to not just get there, but do well when we are there. The boys’ goal is we want to win the whole thing.”

Most of this senior-heavy group has played together in the SCHS pool since they were 10 years old in the San Clemente Tritons water polo club. With one year left of their youth water polo careers together, the motivation and focus is turned up another notch.

“There’s a sense of urgency,” Powell said. “They understand it’s their last go and trying to make the best of it. The senior leadership and the ability to put it in perspective as a senior really helps. It helps with the training, the dog days of the season and being able to go all-out and put the effort in when you need to.”

Powell believes the Tritons are more well-rounded overall and have more offensive weapons than before. However, the focus up front will still be on Hosea, who scored 76 goals last season as the South Coast League co-MVP.

“Christian is just a very dynamic player and draws a lot of attention,” Powell said, “and if teams don’t give him that attention, he’ll make them pay. He’s a better distributor now. He understands that he’s marked and will get that attention. He’s getting better at getting guys involved.”

San Clemente should be marked as favorites to win the South Coast League, and that status will be put to the test right away, as the Tritons open league at home against rival Dana Hills on Sept. 17. If the Tritons can get through the Dolphins at home and again at Dana Hills on Oct. 17, San Clemente will be set for a highly competitive CIF-SS Division 1 playoffs.

“Newport Harbor and Harvard-Westlake are clearly above everyone else,” Powell said of Division 1’s top teams. “After that, in my opinion, it could be an ‘any given Sunday’ type of deal with Huntington Beach, Mater Dei, ourselves, Oaks Christian, Woodbridge. A lot of good teams up there.”

In their first year under the helm of head coach Casey Swenson, San Clemente erased a winless 0-8 South Coast League campaign in 2017 with an undefeated 8-0 run to a Sea View League championship. The Tritons advanced to the semifinals in Division 2 by sweeping rival and No. 3 seed Dana Hills and qualified for the state playoffs.

While San Clemente loses a couple of impact seniors, the Tritons were bolstered by a strong roster of juniors last year who will take the leadership helm in 2019.

Seniors Ella Gardiner and Abby Stewart will be pillars at the net. Stewart led San Clemente in kills in that upset sweep over Dana Hills last season, with Gardiner right behind.

Seniors Julia Wilson and Chanel Sud will help San Clemente control the serving and receiving portion of the game to make sure those up front can do their jobs.

San Clemente is 5-2 to open the season so far. The Tritons opened with a run to the quarterfinals of the Tesoro Tournament with wins over Edison, La Habra and Northwood before falling against Laguna Beach.

The Tritons take on Dana Hills in another grudge match on Sept. 12 at San Clemente and open defense of their league title on Sept. 17 at home.

The Tritons girls cross country team is in a great position after last season’s league championship and another appearance in the CIF-SS Division 1 Finals.

San Clemente was powered by its younger runners last season and lost no seniors to graduation. This means the Tritons are ready to defend their Sea View League championship, and San Clemente gets one more cross country season from its star, senior Hana Catsimanes.

“She’s so good at this point,” San Clemente coach Dave Proodian said. “(My job is) to just keep her amped up and motivated and who she is.”

Catsimanes actually started training with the San Clemente boys team last season and continues to do so this season to push herself further. Catsimanes is also pushing herself with her load of strong academic courses and will be scheduling college visits around the race and school schedule.

Catsimanes is not all that the Tritons are, though.

Belle Sachse is the other leading senior for San Clemente, and Proodian said that returning senior Camryne Harrell was the reason the Tritons won the league title last season. Juniors Kelsie Yamano and Cameron Green will also be major contributors to San Clemente’s efforts this season as well.

“It would be nice to win another league championship,” Proodian said. “As we get closer, on paper, we can see where we stack up. It’s easy to say, ‘Let’s win a league championship!’ But I don’t know who we’ve got this year (yet).”

While the girls are boosted by their superstar in Catsimanes, the boys team had to run with a different tactic. The Tritons won the league title by 12 points despite their top finisher taking fourth place. That’s because the Tritons finished six runners across seven positions, including four straight from fourth to seventh.

The pack mentality pulls the San Clemente boys through to score points in bunches, and while the Tritons lose four of that top six to graduation, San Clemente is still laden with experience and ready to take on the league again.

“We’ve got a good senior group,” San Clemente coach Dan Johnson said, “probably the largest senior group we’ve had in a long time, maybe ever. We’ve got a group that’s been pretty dedicated and working hard.”

Johnson said he’s told his group that you can race as a team, but you have to win as a family. That mentality has helped the Tritons maximize the pack-running mindset to push each other and pull forward anyone who is falling behind.

“These guys have been working together long enough now to know the system and know what we expect of them,” Johnson said.

San Clemente cross country gets going in full swing at the Laguna Hills invitational on Sept. 14, and the championship season starts with the Orange County Championships on Oct. 19 and Sea View League Finals on Nov. 7.

The San Clemente girls tennis team has won five consecutive South Coast League championships, but the Tritons have had to share each of them with rival Dana Hills.

Could this be the year San Clemente reclaims the league all for themselves?

“As the season goes, that should be our strength, if we’re healthy,” San Clemente coach John Stephens said. “Doubles has a lot of new girls, a lot of inexperience.”

Health is a key factor at the start for San Clemente, and in the end, it could help for the doubles teams. Yeam is coming off hip issues last season and has dealt with a case of tennis elbow, so her offseason playing has been limited.

Stephens said that Yeam could end up playing more doubles than singles, but Yeam does have successful experience there. As a sophomore, Yeam and then-senior Sami Neilson won the league doubles championship and advanced to the CIF-SS Individual Championships.

As far as the league this season stacks up, traditional rival Dana Hills lost many key players, and Stephens thinks that Aliso Niguel might rise up as the largest challenge in the league with strong singles play. However, the Tritons will still be there for the fight.

“Our expectations are that the girls are going to get better,” Stephens said. “We think they can really improve. It’s going to take some time, but when we get to league, we still have a chance to win it.”