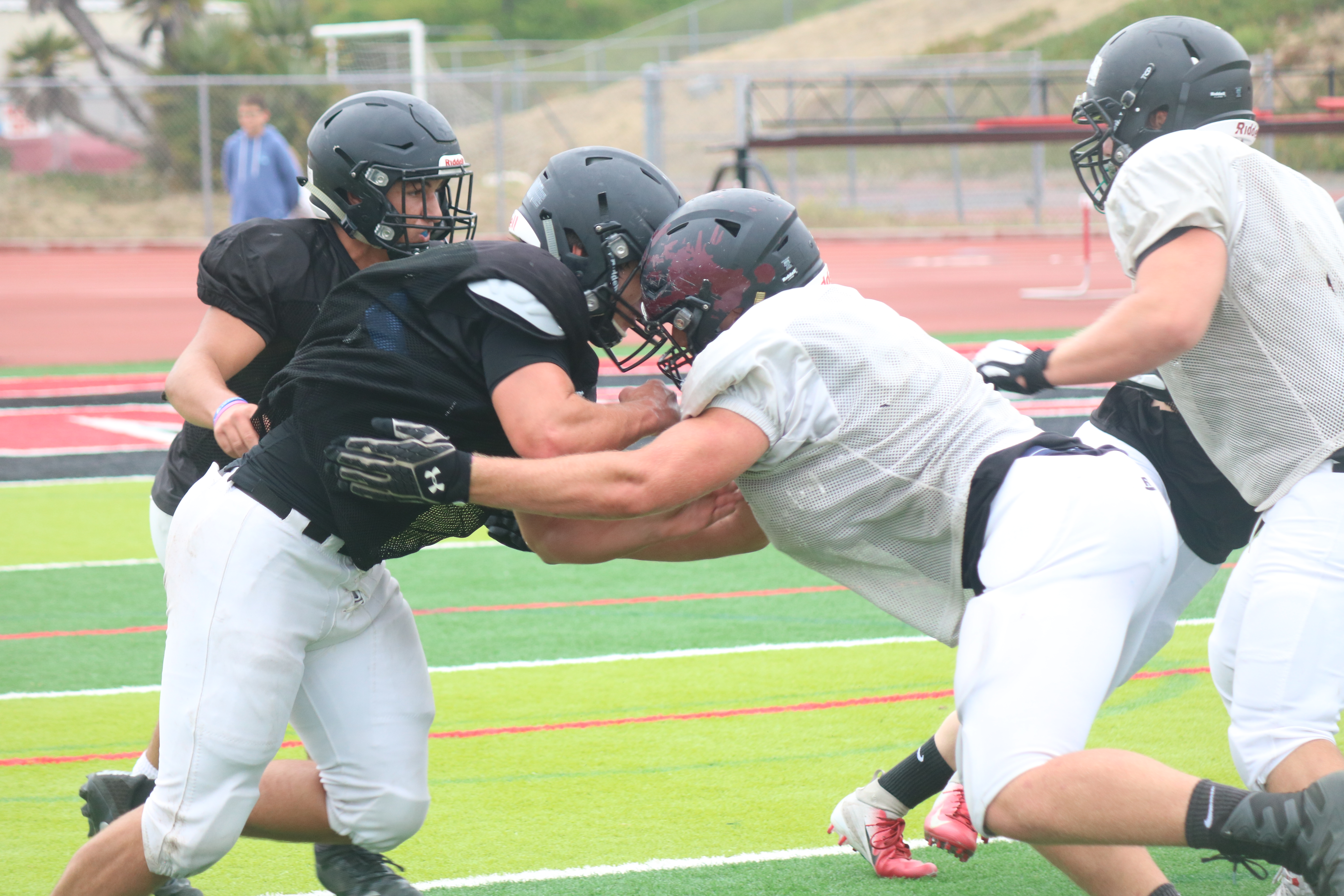 San Clemente has taken two of the three Battle for the Base matchups as the annual game returns south of Camp Pendleton.

After another fight through the San Diego Section’s elite Avocado League, the Pirates advanced to the second round of the Division 1 playoffs. Oceanside graduated its game-changing quarterback from that team.

Junior running back Kavika Tua is the top returning offensive player. As a sophomore, Tua far was the runaway team leader in TDs with 21 and all-purpose yards with 1,620. Senior defensive end Kiki Laie will pressure off the edge after a seven-sack season.

From there, the Falcons carved through their Avocado League schedule with a nearly 16-point average margin of victory before suffering their only loss in the San Diego Open Division title game.

San Clemente closes its opening run through the Avocado League against another team that edged out the Tritons in the final minutes last season.

La Costa Canyon was one of the San Diego Section’s toughest teams last season, but despite a No. 1 seed and first-round bye in Division 1, the Mavericks failed to win a playoff game. La Costa Canyon was shut out in its final two games.

San Clemente continues against some of the best San Diego can offer by welcoming Lincoln, the county’s Division 2 champion and CIF Division 3AA SoCal Regional champion.

The Hornets won their four San Diego Division 2 playoff games by an average of 22 points and captured the SoCal Regional title over Culver City, 54-42. Lincoln moves up to Division 1 against its other Western League foes.

The Hornets can go multiple ways at quarterback, as senior Chris Davila and junior Raymond Spriggs each had a lot of reps and success last season. Spriggs can also line up at wide receiver.

San Clemente’s win over Edison last season sparked the turnaround for the Tritons, and this season, it marks the start of San Clemente’s Orange County schedule.

Edison is coming off a third-place league finish and a first-round playoff exit.

Junior Braeden Boyles returns at quarterback. Boyles’ tenure as starter began against San Clemente a year ago. Boyles threw for 1,050 yards and ran for 213 yards in nine games.

Top passing target Cole Koffler is back as a senior, and senior Mike Walters will be a versatile player at linebacker and running back. Bryce Gilbert will pressure at defensive end.

Of all of San Clemente’s narrow, last-minute losses last season, the Corona del Mar game is one the Tritons  might want back more than the others. It’ll be a tough fight for revenge this season.

In their first season in the Sunset League, the Sea Kings tied for the league championship and advanced to the CIF-SS Division 4 title game.

This season, Corona del Mar returns all of its major offensive players, including one of the top—if not the best—quarterback-receiver connections in the county. Quarterback Ethan Garbers, a Washington commit, and receiver John Humphreys, a Stanford commit, both return for the Sea Kings.

Last season was an up-and-down affair for Tesoro, which finished right in the middle of the South Coast League with wins over the bottom two, Capistrano Valley and El Toro, and losses to the top two, Mission Viejo and San Clemente.

The Titans lost in the first round of the Division 2 playoffs, and while CIF-SS’ new playoff format forced a drop to Division 3, Tesoro is poised to potentially throw a wrench into the league hierarchy.

Senior Sean Lindgren steps up at quarterback with a strong group of receivers at his disposal, led by returning top receiver senior Justin Schafer.

El Toro encountered a rude welcome back to the South Coast League last season, and its 50-point loss to San Clemente, which got out of control early, wasn’t even the worst of it. The Chargers lost all four league games by a combined 231-25 score.

El Toro is lining up for another rough season, as the Chargers will field a young group after losing all three quarterbacks, their top rusher and top three receivers to graduation.

Despite a fourth-place finish, Capistrano Valley was a pesky team in the South Coast League last season, with tight contests against the league’s top three. The Cougars and San Clemente kicked off in a lightning-delayed Saturday morning affair, where the Tritons clicked in late.

After a semifinal run in Division 4, Capo Valley is regrouping with new leadership. Sean Curtis takes over as the Cougars coach after a stint as JSerra’s freshman coach. Curtis is also the son of Capistrano Valley Christian coach Rick Curtis.

Top rushers Dylan Flynn and DeAndre Lenard, both seniors, are the top returners for the Cougars offense.

Last season was a new experience for Mission Viejo in a few ways.

It was the first season under coach Chad Johnson after a legendary run under Bob Johnson (no relation). San Clemente also handed the Diablos their first league loss since 2008. It was also the Tritons’ first win over Mission Viejo since 1999, Bob Johnson’s first with the Diablos.

Mission Viejo hopes the pattern of a first-year loss by a Johnson to San Clemente followed by tremendous success continues, and the Diablos are loaded with talent to take the first step.