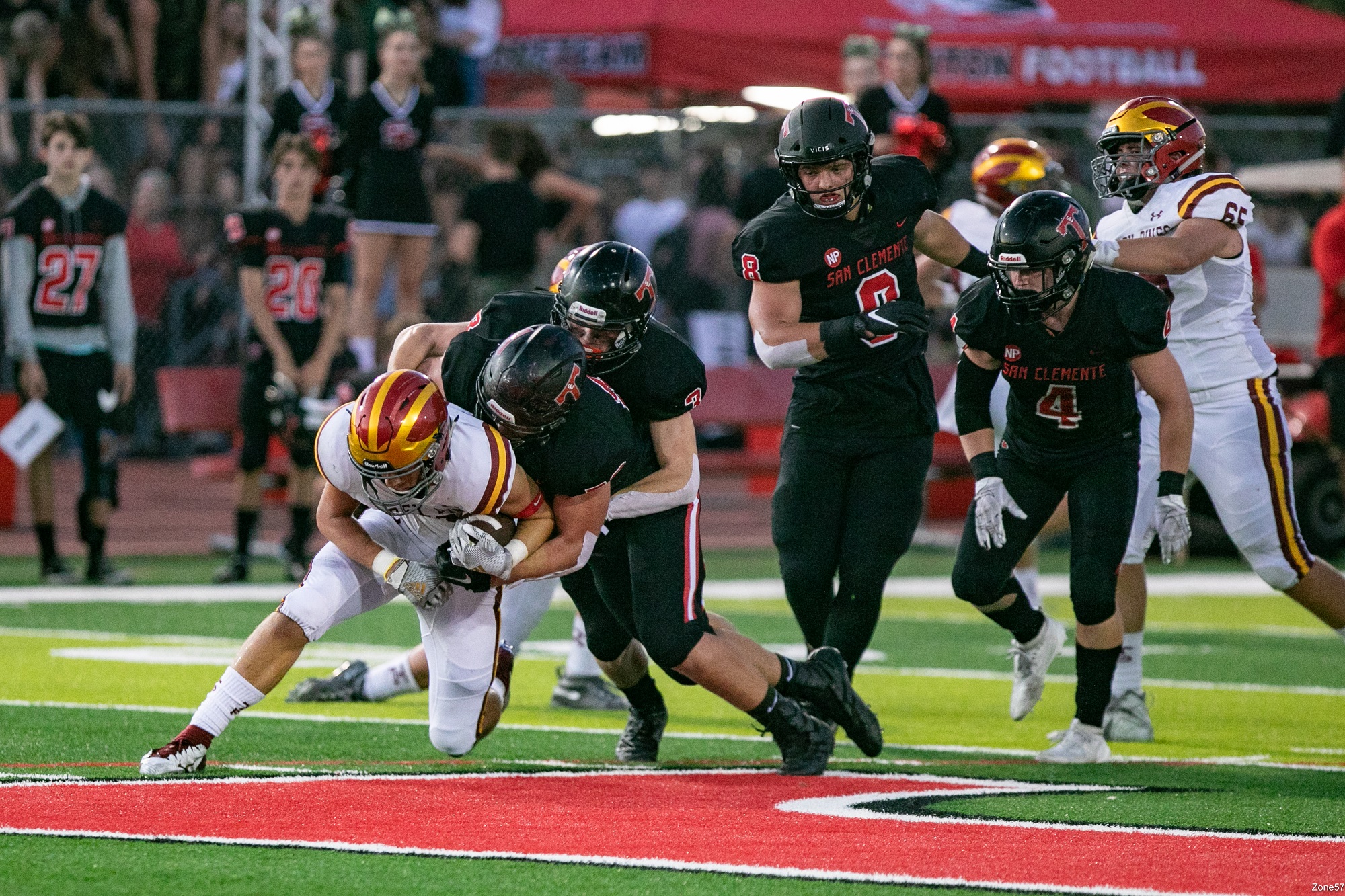 To say this season’s San Clemente football team has been through the wringer might be putting it lightly.

This group of Tritons, especially its senior class, has experienced more than most in just the past two years alone. It’s these shared experiences that have San Clemente football coach Jaime Ortiz calling this 2020-21 group the closest-knit since the 2016 CIF-SS and State championship team.

“It’s a very tight group of kids with everything they’ve been through,” Ortiz said. “Loss of parents, the loss of Coach (Joe) Wood. There’s numerous obstacles they’ve faced, and they’re ready to go.”

For these senior leaders, they have lost a tremendous amount.

Senior lineman Ryland Swarthout, whom Ortiz described as the Tritons’ rock, lost his mother before the 2018 season. Senior lineman Aidan Coulson lost his father early in the 2019 season. The entire South Orange County football community lost San Clemente running backs coach Joe Wood after a battle with COVID-19 on Feb. 12, exactly one week before the state announced updated guidelines to bring the return of football.

In a season that had already sustained one controversy with an incident of a “racial epithet” and “derogatory words” from the San Clemente fans toward visiting Lincoln of San Diego and their cheerleaders, Tritons quarterback Nick Billoups was ruled ineligible by the CIF-SS due to a transfer violation on the Monday before San Clemente’s scheduled CIF-SS Division 2 semifinal. The Tritons were removed from the CIF-SS playoffs, and their 10-2 record was wiped away by forfeit.

Adding insult to injury, a San Clemente Tritons team eager to prove itself once again and fight back in the 2020 season was nearly denied that chance as the COVID-19 pandemic struck. The Tritons’ season was delayed after a July CIF-SS announcement restructured the season schedules, and it was delayed a second time as the pandemic persisted and raged through December.

However, the day is finally here.

On Friday, March 19, 2021, 16 months and four days since San Clemente last took to the field for a competitive game, the Tritons will open their football season.

“I think for our kids, it’s been delay after delay after delay, and a lot of that was out of their control,” Ortiz said. “To get out and play with teammates, represent their school, that’s what they’re looking forward to doing. For our players to keep training since Aug. 25, I think it’s a testament to their character and dedication to the program.”

San Clemente will kick off its delayed and shortened five-game season against Capistrano Valley on Friday. The Tritons will host Aliso Niguel next week and then open their South Coast League season at San Juan Hills and at Tesoro after that. San Clemente will finish against rival Mission Viejo—a possible and probable league title clash—and that will be it.

There will be no playoffs to get further redemption for what was taken away in 2019, but the Tritons will take the chance they’ve been given to go fight for a South Coast League championship.

“It left a bitter taste in my mouth,” senior Caiden Robertson said of the end of the 2019 season. “(CIF-SS) canceled the playoffs, so there’s nothing we can do about that. What we can control is to play our butts off and do what we can with this opportunity.”

While San Clemente returns only 11 of its starters, six on offense and five on defense, the Tritons boast a group of 36 seniors who present a strong offensive core and formidable defensive front.

Stepping into that role is no easy feat, but junior Lachlan van Rosmalen has reportedly taken to it quite nicely.

“It’s a coveted position, and he met it head-on,” Ortiz said. “He earned the respect of our seniors, and he hasn’t even played a varsity game yet.”

Van Rosmalen transferred from St. John Bosco after his sophomore season, and over the offseason, he worked hard to get into the San Clemente fold. While official workouts had been off the table, van Rosmalen met up with receivers to run routes. He and Swarthout took leadership of the offensive players and held each other accountable while they couldn’t practice at the school.

“I’ve never seen someone take control of us and say we’re going to get the job done like him,” Swarthout said. “Lachlan, his leadership is above the charts. I think that’s going to help us.”

Van Rosmalen will throw to a receivers group that is led by the other legacy position for the Tritons with senior tight end Bentley Redden. The San Clemente tight end spot is a pipeline to the state of Utah, whether it’s Cole Fotheringham at Utah or Isaac Rex at BYU. Redden also signed with BYU.

Redden will float inside and outside alongside senior receiver Kai Rex and sophomore Reid Kotiranta. Seniors Anthony Hall and Ryan Goddard will also step in at tight end.

It won’t be all run and gun, as San Clemente will be balanced out by a heavy dose of senior running back James Bohls. The strong and speedy Bohls, an Arizona signee, and senior Ashton Whitsett form a two-headed attack in the backfield.

Missing from the receivers and the defensive secondary is impact senior Cole Batson. Batson has opted out of his senior season to focus on preparing for his upcoming year at Boston College, where he is signed. Batson will continue to contribute in practices and as a game manager.

Instead, the defense will be led up front, with Redden and Swarthout going both ways on the line and Robertson and junior Kanious Vaughn being the standouts. Robertson will shut down the middle of the field at linebacker, and Vaughn will set the edge and bring pressure.

San Clemente has as strong of a group as its ever had, mentally and physically.

“As we sit here on March 16, any game is a gift,” Ortiz said. “For them to play five games and get a sense of normalcy, that’s a championship in itself. For the players that have stayed and worked with it, every one of these players on any team is a champion this year.”

Zach Cavanagh Zach Cavanagh is the sports editor for Picket Fence Media. Zach is a multiple California Journalism Award winner and has covered sports in Orange County since 2013. Follow him on Twitter and Instagram @ZachCav and follow our sports coverage on Twitter @SouthOCSports. Email at zcavanagh@picketfencemedia.com.