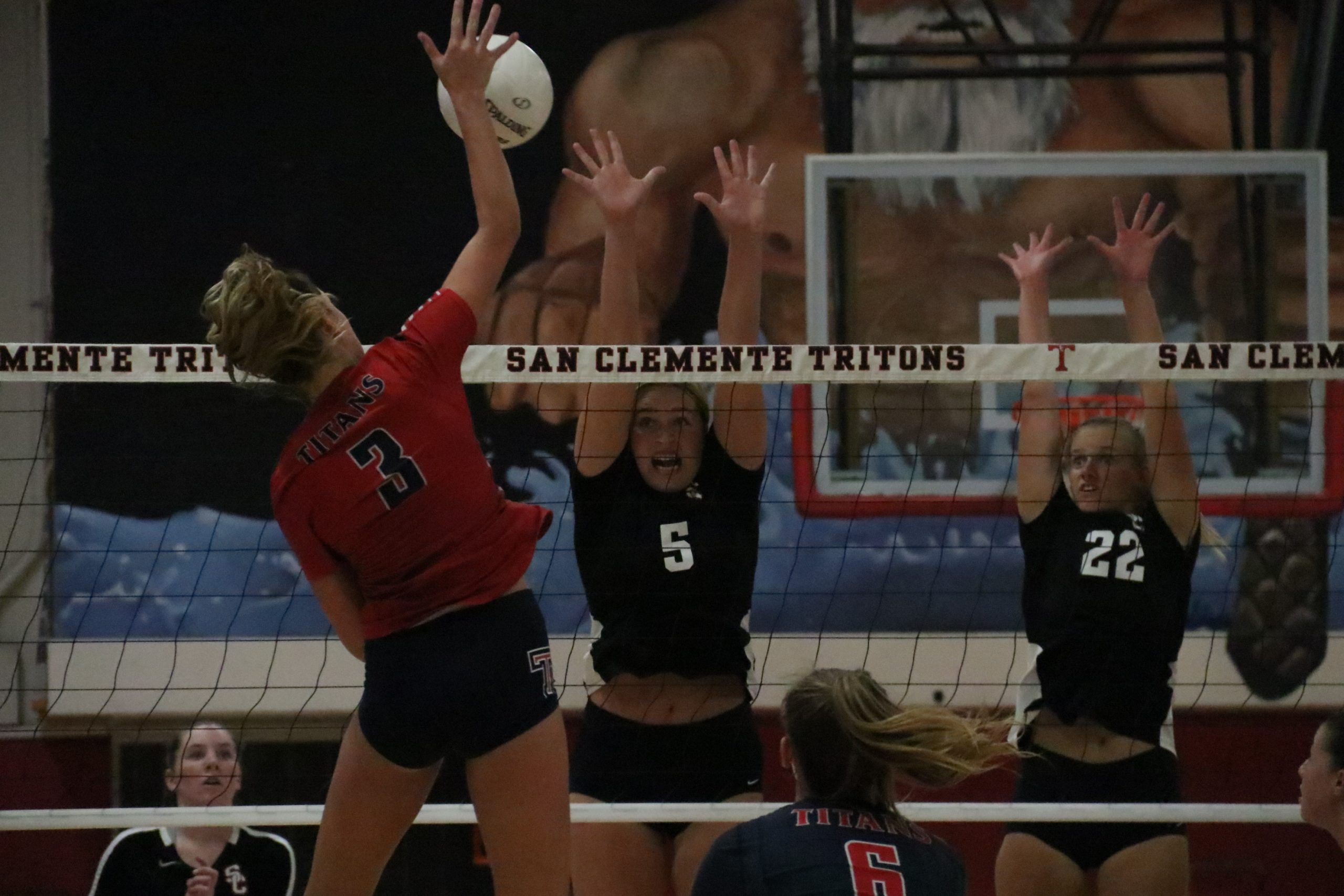 Last year’s fall sports teams were those most adversely affected by the schedule delays and restrictions brought on by the COVID-19 pandemic.

Fall sports were delayed three times, schedules were shortened, and limited conditioning camps went on for months from their August start dates.

This year, the San Clemente athletic facilities are as active as ever, and the fall sports season is running at full blast with league play just underway or on the horizon

The San Clemente girls volleyball team was the first team to start its season back on Aug. 17, and it’s only fitting.

Of all the fall sports last year, girls volleyball was the most affected, as their season was almost entirely canceled. Even when the Tritons did get some games in, it was just a handful, with some being played outdoors. It was hardly a full campaign.

This season, San Clemente has taken this full opportunity and run with it to the tune of a 19-8 record, a 2-0 start in South Coast League play and the No. 10 ranking in the combined CIF-SS Division 1 and 2 poll.

“They’re so deep. I feel like we have a hundred Swiss army knives,” San Clemente girls volleyball coach Casey Swenson said. “They can all do a bit of everything, and they excel. Sometimes, you get a team that’s balanced, and they’re all going to just keep the ball alive. These girls are just Terminators.”

San Clemente closes the first round of league play with a critical match at Aliso Niguel on Tuesday, Sept. 28, before hosting Trabuco Hills on Thursday, Sept. 30.

The shortened spring season was a time of change for the San Clemente boys water polo program.

First, head coach Logan Powell stepped down in January, so the Tritons went with an interim coach when the season finally got underway in March. That season was limited to a two-week sprint through the South Coast League, where San Clemente went 1-4 for its first losing league record since 2016. The Tritons had won three straight league titles.

The new head coach of the San Clemente water polo programs is Ikaika Aki, who was last an assistant coach at Loyola Marymount. The Tritons opened the Aki era on Aug. 31 with a win at Beckman, 12-8.

Since then, San Clemente has fought to find its footing through the tournament season. San Clemente is 4-2, with tournament wins over Garces Memorial of Bakersfield, league rival Dana Hills and Costa Mesa.

San Clemente opens the South Coast League on Tuesday, Sept. 28, at Capistrano Valley and is home on Oct. 5 against Tesoro.

The Tritons host Dana Hills on Oct. 7, and the Dolphins host San Clemente on Oct. 25.

The San Clemente girls tennis team got a full South Coast League season in the spring and even qualified for the playoffs; however, the Tritons’ league championship streak was broken.

San Clemente’s run of South Coast League titles stopped at six in a row, as the Tritons lost both league matches to eventual league champion Aliso Niguel. San Clemente was 6-2 in league and finished 8-4 overall, with a playoff win over Murrieta Valley and a second-round loss to Beckman.

This season, San Clemente is loaded with 11 seniors looking to restart that league streak.

The Tritons opened league play with the first crucial match against Aliso Niguel at home on Tuesday, Sept. 21, but results were not available at press time. San Clemente hosts Dana Hills on Thursday, Sept. 23.

San Clemente plays at Aliso Niguel on Oct. 7 and at Dana Hills on Oct. 12. League Finals are Oct. 27.

San Clemente has taken that success and experience into the full fall campaign with some promising early-season results. The Tritons are ranked No. 5 in the latest CIF-SS Division 1 poll.

Junior Juan Chantaca led San Clemente at the Laguna Hills Invitational two weeks ago with a grade-level win in the Division 1 junior race at 15:58. Sophomore Brett Ephraim also won the sophomore race at 16:28. Senior Hayden Beauchemin finished third in the senior race at 16:47.

San Clemente also competed in the sweepstakes race at the Woodbridge Classic in Corona last weekend. While the Tritons’ team finish and placings weren’t high, the San Clemente runners took to the fast course. Chantaca led the way at 15:10, with Beauchemin not far behind at 15:12. Ephraim finished at 15:31.

San Clemente is next in action at the Dana Hills Invitational on Saturday, Sept. 25.

The San Clemente girls cross country team is a bit younger on the experience level than the boys, as the Tritons lost some top runners to graduation, but San Clemente has a strong stable of juniors to take on this full season.

At the Laguna Hills Invitational, San Clemente got a second-place finish from Abigail Howard in the junior Division 1 race at 20:31. Kennedy Banks (20:57) and Sydney Resser (22:00) also finished in the top 10 of the junior race at sixth and 10th, respectively. Jessika Ephraim finished second in the senior race at 20:33.

San Clemente ran in the rated race at the Woodbridge Classic in Corona. Like the boys, the Triton girls didn’t place very high, but they benefited from the fast course. Howard ran a personal-record 18:46; junior Savannah Punak ran an 18:54.