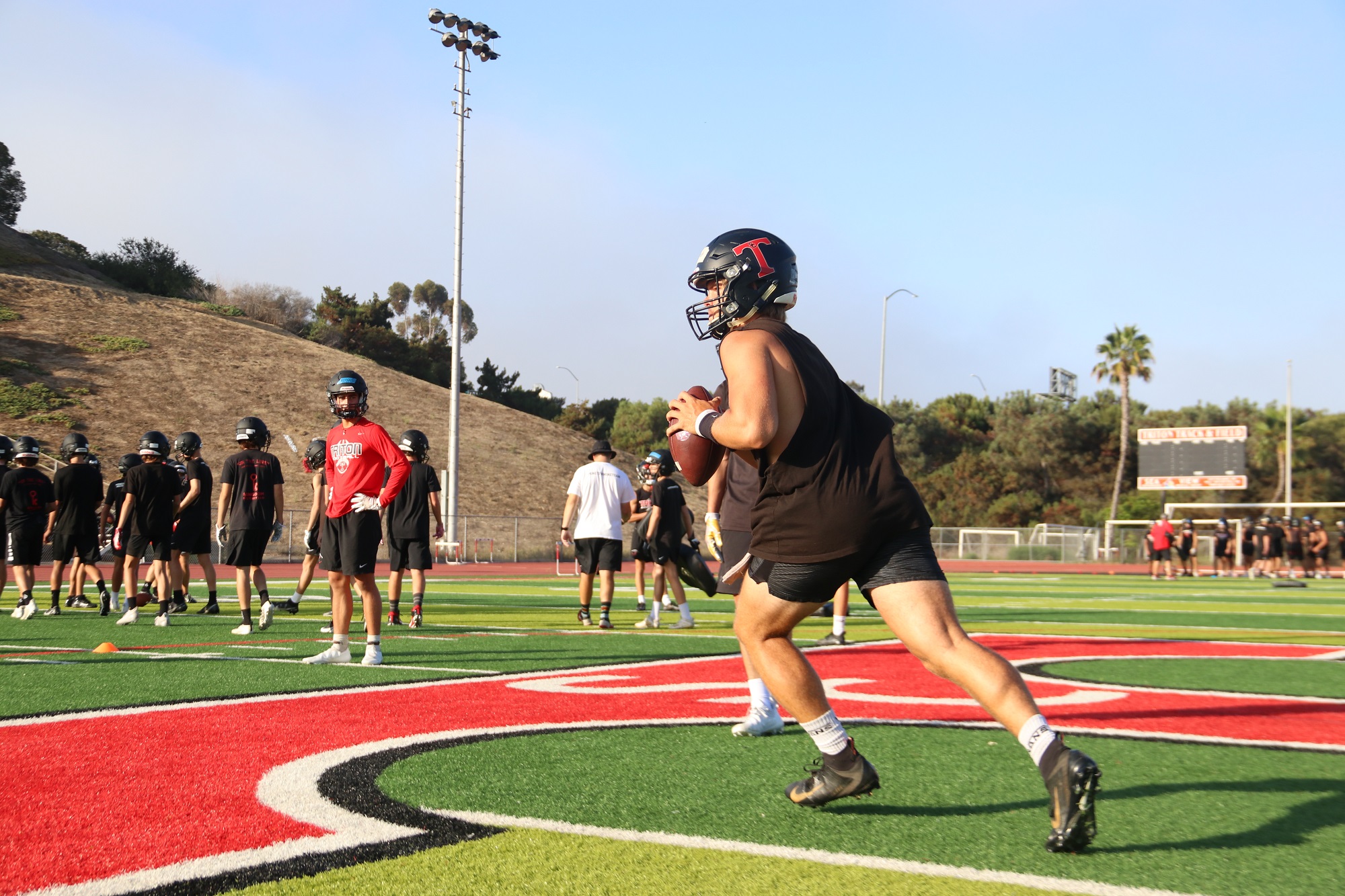 2021 Triton Football Preview: Back to Business

Just four months later, and the Tritons are right back at it.

After experiencing the longest and shortest football season that hopefully anyone will ever experience, the San Clemente High School football team is finally on the true track of normalcy.

The 2020 CIF-SS football season was delayed three separate times due to the coronavirus pandemic: first, until December 2020; then, to January 2021; and then, indefinitely before its eventual March 2021 start.

The season was shortened to just five games, but at the time, each new announcement and each step back to the field was called the next step in the return to normalcy. Each game was heralded as a blessing to even be playing at all, even if it was still far from normal.

The Tritons made the absolute most of their opportunity. San Clemente went 5-0, carved up the South Coast League and shut down and upset rival Mission Viejo for the second time in three seasons to earn its second league championship in the same span.

“Nothing was guaranteed last year, and for our kids to go through that and come out on top, that’s a cool thing,” Ortiz said. “That’s character instilment that’s going to help this year, but also in life.”

The fall 2021 season finally offers that true return to normal with a regular start date and a regular 10-game schedule. Also, for those many returners from last year’s league champion, this season offers that much more: a chance to return to the playoffs and compete for a CIF championship.

“The team we had last year, we really felt if we had the opportunity to go all the way, we would’ve gone 10-0, we would’ve gone to a CIF championship,” senior quarterback Lachlan Van Rosmalen said. “We felt like last year, we were cut short of our full potential, and that’s put a fire in some players to show teams, even though last year we were great, this year we’re even better.”

It’s hard to say that a team would be improved by losing the MVP running back that tore through the South Coast League and pulled the Tritons to a championship, but the graduation loss of James Bohls to University of Arizona slots in a dynamic, pass-catching running back in junior Blake Allen, who puts the Tritons on the road to balance.

Allen was all-league at strong safety as a sophomore, but the rugby player will not get the majority of the load at running back. Allen will be in the backfield with Van Rosmalen, who has a complement of strong wide receivers to make the San Clemente offense an equal-opportunity unit.

Senior Easton Cattiach and junior Reid Kontiranta got plenty of meaningful snaps at receiver last season to bring experience to the position.

With Bohls as the focus last season, the Tritons and their offensive line developed a blue-collar work ethic that will also be beneficial this season. The line will be led by seniors Michael Alejo, Tanner Mehrens and Myles Wire, plus junior Colin Brophy.

San Clemente’s defense has long been a reliable unit and will continue to be a rock for the Tritons, despite graduation losses up front and a younger group overall.

Where San Clemente does have experience is in the secondary, where the Tritons bring back a trio of defensive backs who all started as sophomores against Mission Viejo in the spring and shut down the Diablos’ explosive offense. Junior Cole Robertson and Mehrens will be impact players up front for San Clemente and get that necessary pressure in the trenches.

In the past, San Clemente’s defense had also been known as a group of ball-hawkers, but that was something that lacked from last season’s performance. Ortiz acknowledged that as one area that needed improvement for the Tritons.

San Clemente’s path to the playoffs this season is both slightly easier than previous seasons and also more convoluted than ever before with the advent of yet another tweak to CIF-SS’ competitive equity playoff system.

When the competitive equity system was first put into place five seasons ago, teams were slotted into divisions based on data from the two previous seasons. That system was eventually tweaked at the top to make a Division 1 & 2 grouping, in which all teams would make the playoffs no matter what and played the season essentially for seeding purposes.

On the whole, the competitive equity helped eliminate the first-round blowouts seen in the old system and seemingly gave everyone an equal shot at a CIF-SS title. However, over time, some inequities began to show. The divisions didn’t all have the same number of teams, but the number of playoff teams was locked, meaning it was easier to make the playoffs in some divisions than others.

Additionally, teams could have two great seasons with a strong senior class that would put them in a higher division. Injuries and graduation losses would hit the following class, and despite having a weaker team, they would be stuck in the higher division. There were also instances of historically bad teams getting an influx of talent or transfers and running roughshod over a lower division.

To specifically address the last point and help with the inequity of the number of teams in some divisions, the latest tweak was passed by the CIF-SS and was originally slated to start last season.

The brackets will also be seeded straight No. 1-16, with no regard for league affiliations or league championships. In the past, league champions were guaranteed a first-round home game, and two teams from the same league couldn’t meet in the first round. San Clemente was affected by the first stipulation in 2019, when, as a No. 2 seed, the Tritons traveled to Valencia.

On the surface, this looks to be another step to complete equity by basing on the current season and not handing out any immediate disadvantages. Some detractors have pointed out it could be a single point in the rankings that is the difference between being a No. 16 seed in a higher division or being a No. 1 seed in the next division down.

However, the season still needs to play out to see if teams could or would try to control that destiny, or if this is truly an issue at all. Ortiz is a proponent of this new model, but the San Clemente coach isn’t going to be one to worry about the Tritons’ place week to week.

“When the playoffs come, I’ll worry about the playoffs,” Ortiz said. “For me, it’s focusing on each game. If we’re 10-0 and we’re in the top eight, then we’re in the top eight, we’d deserve to be there. That’s something I can’t control. I can control each week, and I know the more we improve each week and the more wins we get, the better chance we’ll be in a better playoff bracket.”

No matter where the Tritons eventually get slotted, should they make the playoffs as a repeat league champion or as an at-large team, San Clemente will cherish each opportunity it has to get on the field and make the absolute most of it.