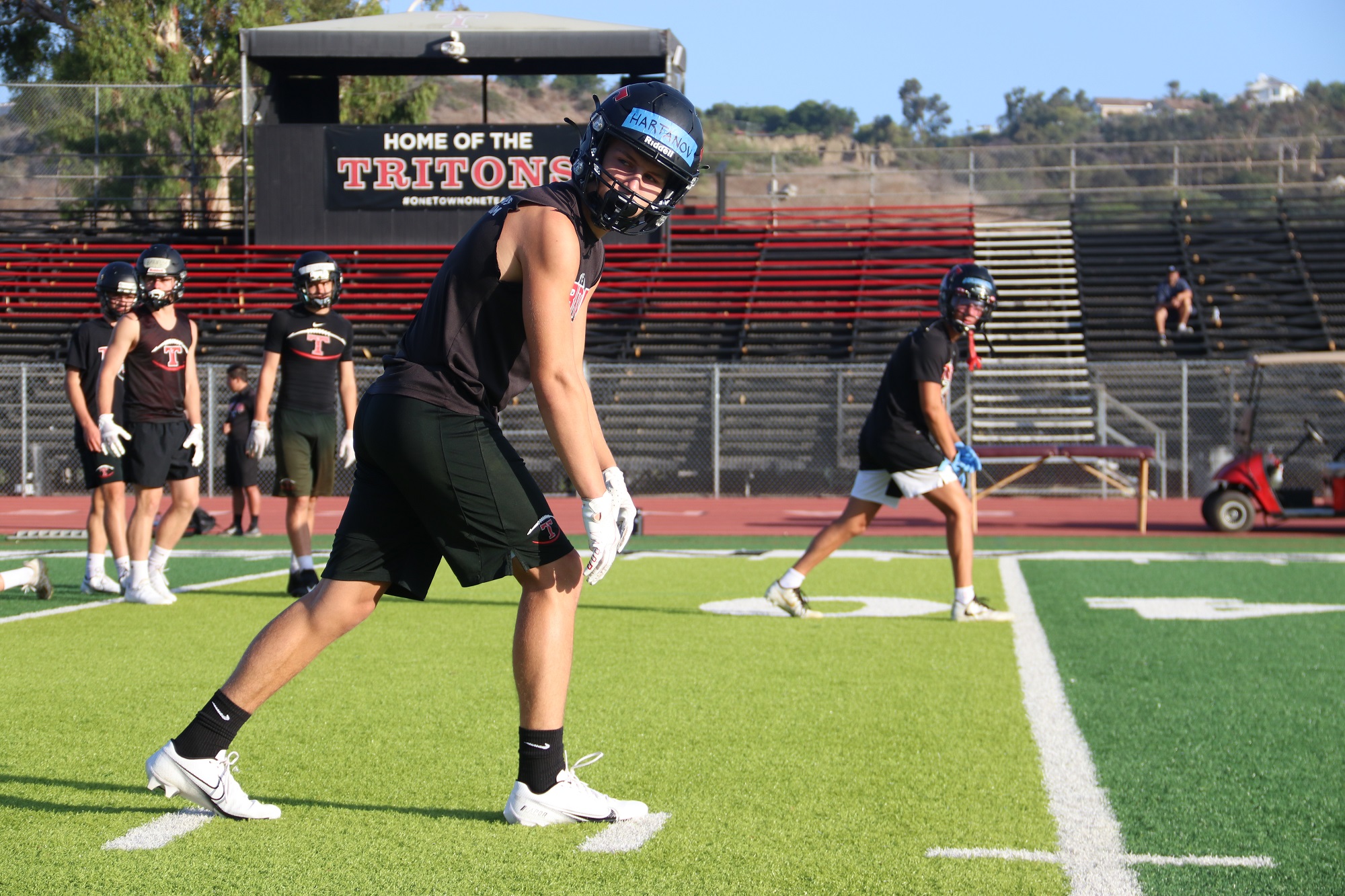 As San Clemente tore up the South Coast League on the ground, the Tritons’ line carved open those running lanes. While that line loses some impact seniors, Alejo is one who returns from that group. Alejo is confident in the group up front and said everyone knows and embraces their role.

In the spring, San Clemente was paced by an MVP performance from then-senior running back James Bohls. Blake Allen steps into that position as a more all-purpose back than a straight-ahead runner. Allen makes the Tritons more dynamic by catching the ball out of the backfield and using his speed.

Part of an athletic San Clemente High School family, Thomas Hartanov is one of many speedy members of the Tritons receiving corps. Hartanov didn’t see much of the field as a sophomore, but he’s a shifty receiver playing on the inside who can shake off linebackers and find open space.

Coming on as a surprise in the spring, Easton Cattiach is the leading returning receiver for the Tritons. Cattiach had eight receptions for 102 yards and a touchdown last season, and he will be relied on as the deep threat for San Clemente. Look for contested catches and yards after catch.

Lachlan Van Rosmalen worked on his deep ball accuracy over the offseason, and that will be key in a more dynamic passing attack and more equally balanced offense after a run-dominated spring. Van Rosmalen also said he’s more confident in his reads and quicker to see what the defense gives him.

Jack Demora is a physical leader on the defensive front. Demora himself says he loves playing at nose guard, because he likes to get hit around, loves the action and enjoys being in the trenches. In the spring, Demora made 18 tackles for the Tritons, including 10 solo tackles.

Brad Gerken is one of several younger underclassmen for San Clemente’s defensive unit who is ready to make an impact after meaningful snaps as a sophomore in the spring. Last season, Gerken pulled in an interception and recorded 12 total tackles. Gerken flies to the ball out of the secondary.

On the edge of the front seven, Reese McDonald was already a key member of the Tritons’ defense as a sophomore last season. McDonald was sixth on the team in total tackles in the spring with 26, the most by any non-senior. McDonald contains the run and rushes the passer.

In the trenches on both sides of the ball, Tanner Mehrens will make his presence known with his length and strength. Mehrens said his mentality is to go through people, dominate them, be physical and put people on the ground. Mehrens made six tackles as a junior in the spring.

While Cole Robertson’s older brother, Caiden, led the Tritons in tackles a year ago, Cole made a name for himself in the front seven as well, and he steps up as a defensive leader this season. Robertson racked up three sacks last season, including two against Mission Viejo, with nine total tackles.