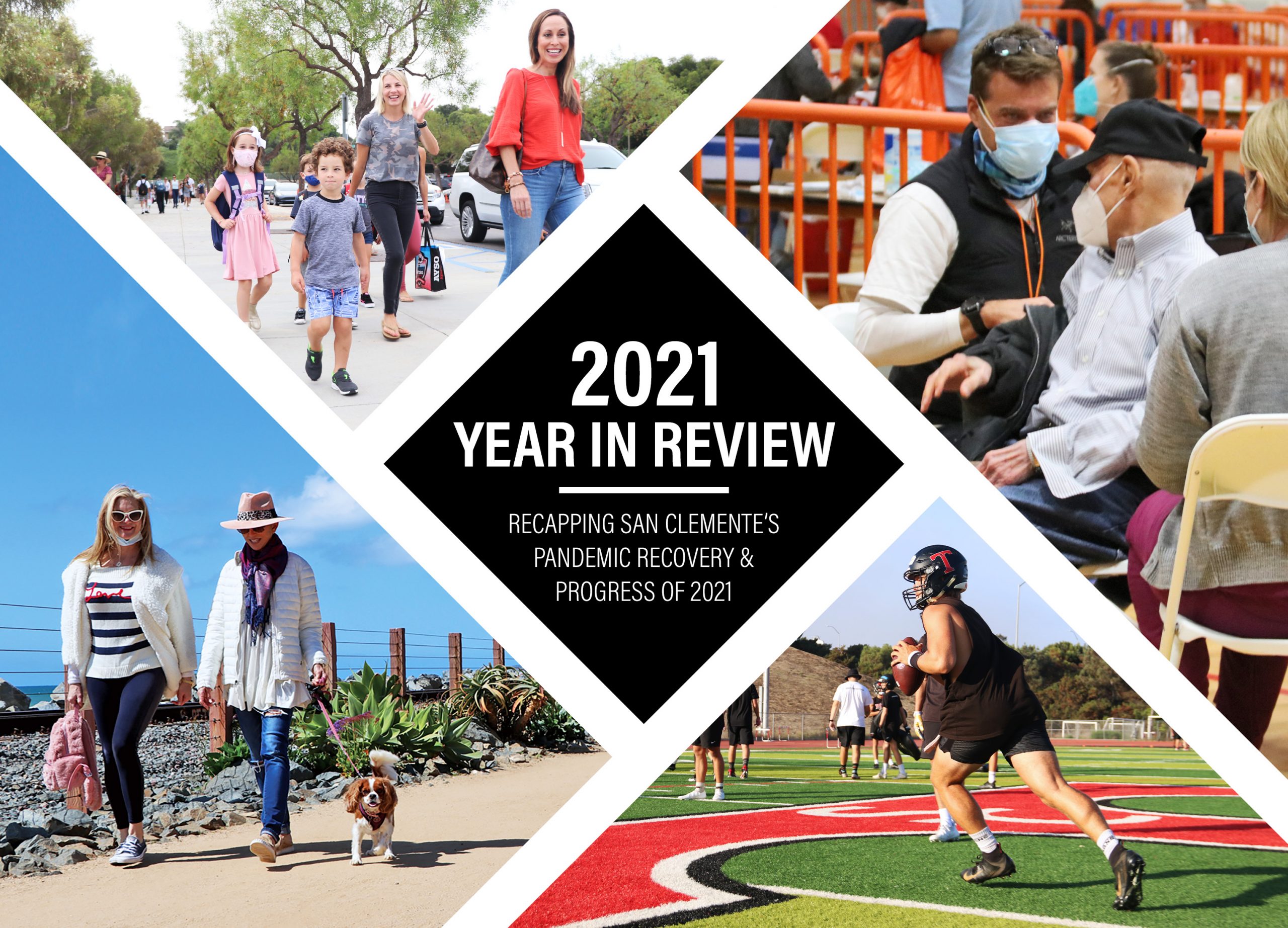 2021 Year in Review: Looking back at San Clemente’s pandemic recovery and progress of 2021

The threat of COVID-19 remained constant into and throughout 2021, as San Clemente, Orange County, and the state progressed through Gov. Newsom’s four-tier monitoring system.

San Clemente also dealt with numerous battles against the Transportation Corridor Agencies and controversy within the City Council.

Yet, the town still took economic strides and provided plenty of heart-warming stories.

Check out the biggest stories from 2021:

The new year began on a compassionate note, as San Clemente learned how Jay “Sparky” Longley and his company, Rainbow Sandals, donated about $500,000 to local organizations over the holidays.

By the month’s end, California had lifted its regional stay-at-home orders amid decreases in hospitalizations and positivity rates.

Additional laws went into effect on Jan. 1, raising minimum wage to $14 hourly, restoring voting rights for felons who had completed their sentences, and requiring women to sit on boards of publicly held companies, among others.

Within San Clemente, the city’s Beaches, Parks and Recreation Commission approved a series of recommendations to the City Council for more restrictions on electric bikes.

The city said goodbye to Ray’s Barber Place, while the city’s North Beach corridor was recognized as a historic district.

The City Council approved a yearlong education campaign on e-bikes to protect pedestrians on the Beach Trail.

The saga involving local conservative activist Alan Hostetter began with the FBI inspecting his San Clemente home following his attendance at the pro-Trump march on Jan. 6 in Washington, D.C., where rioters stormed the Capitol in an attempt to overturn President Joe Biden’s Electoral College win.

The coronavirus-related death rate dropped in both the state and Orange County, as California approached five million vaccines administered.

Near the end of the month, the beloved family-owned Surfer’s Journal celebrated its 30-year anniversary.

An increase in homeless deaths in the county led to advocates calling for the city to build a shelter.

City staff and councilmembers got a glimpse of the new Police Services Substation on the second floor of City Hall.

A local teachers union raised concerns over communication of positive COVID-19 cases and other lapses on CUSD campuses.

Attorneys representing the family of Kurt Reinhold, a Black homeless man who was shot by Orange County Sheriff’s deputies in September 2020, amended a complaint after a dashcam video of the incident was released. The development in the case occurred as the U.S. House of Representatives passed a police reform bill named in honor of the late George Floyd.

The City Council voted to remove a “loyalty oath” in the process of councilmembers reviewing confidential documents.

Orange County continued its journey into the state’s red tier regarding coronavirus metrics. In early March, the county’s state-monitored COVID-19 metrics continued to drop steadily. By mid-March, the county slid into the less-restrictive red tier.

The CUSD Board of Trustees considered a proposal to lay off 91 positions, 60 of which were stationed in grades K-6, approving a preliminary resolution for the process.

A San Juan Capistrano family brought a lawsuit against an off-duty sheriff’s investigator for pulling out a firearm while confronting a group of teenagers at San Clemente’s skate park in October 2019.

While momentum surged for a recall to remove Newsom, the governor addressed the state by talking about COVID-19 testing, vaccinations, and other plans of action.

Owners Kelly and Roger Sugano retired and shut down Taka-O Japanese Restaurant after 41 years of service.

The City Council began the process of removing the city as a member of the Transportation Corridor Agencies (TCA)—a move it hoped would eventually block the 241 Toll Road from reaching San Clemente.

Councilmembers voted to restart the summertime trolley program, approving a plan to have it start in mid-May—two weeks ahead of its initial schedule.

The city began the process of finding and zoning areas in San Clemente to potentially place more than 982 new housing units as part of its Housing Element update—a process mandated by the state to ensure cities can accommodates those homes and address California’s housing shortage.

CUSD announced middle and high school students could return to campus four days a week for the rest of the 2020-2021 school year, slowly reaching parents’ demands of a full five-day schedule. By the end of April, the school district planned to reopen campuses full-time for the next school year.

The sound of locomotives routinely sounding their horns through town ceased by the month’s end as the Federal Railroad Administration approved the city’s waiver to reestablish San Clemente’s quiet zones along the train tracks.

The City of San Clemente’s time with the TCA came to an end, as the City Council voted to formally withdraw from the toll road operators’ governing boards, effective on July 1.

The council promoted Erik Sund to the role of city manager after eight years of service as the city’s assistant city manager. Councilmembers also voted in favor of proposals to increase revenue at the four concession stands around the city.

The development of replacing the historic Bowling Center with a food hall continued with crews excavating the site to make way for the building’s foundation and its underground basement, which restaurants will use for food storage.

Three San Clemente sisters gave back to their city through WiSTEM+, a nonprofit they founded, to encourage young women to pursue STEM careers.

Local artists started work on murals throughout the city that would honor two San Clemente surfers—Kolohe Andino and Caroline Marks—who earned spots on the team to represent the U.S. during the Tokyo Olympics.

Gene James, the city’s mayor pro tem at the time, saw his resolution to declare San Clemente as a Second Amendment Freedom City pass, while unable to reach the term of “Sanctuary City.”

The city faced the challenge of celebrating a declining unemployment rate, while the business community struggled to fill open positions.

Hostetter and five more men were indicted on conspiracy charges for their alleged involvement in the Jan. 6 Capital riot.

The Orange County Board of Supervisors reached a $195,000 settlement agreement in the lawsuit that accused an off-duty officer of pulling a handgun on teenagers at the Ralphs Skate Court in 2019.

Another local woman was arrested in connection to the Jan. 6 insurrection, as 69-year-old Lois Lynn McNicoll was charged with entering a restricted building without lawful authority, among other charges.

The CUSD Board of Trustees approved a resolution to request that masks be optional for people on school campuses, but the state kept the mask requirement for students.

Caltrans announced it would conduct a sweep of a homeless encampment containing dozens of people who sat on an official right of way within San Diego County, just outside San Clemente.

Congressman Mike Levin announced a caucus to address the storage and disposal of spent nuclear fuel from sites nationwide, including SONGS.

Calls for providing shelter and affordable housing to San Clemente’s homeless continued. Advocates attended a rally that came just before Caltrans officially conducted its sweep of an encampment off a 5 Freeway exit ramp just past the south end of town.

The city’s lawsuit against the TCA was dismissed, after a Riverside County judge found the city could not prove the toll road operators were looking to extend the 241 through San Clemente.

As the U.S. military attempted its withdrawal from Afghanistan under heavy controversy, one San Clemente family in Kabul endured an emotional journey to return home.

Demonstrators gathered to honor the 13 troops, including 10 Marines from Camp Pendleton, who were killed in a suicide bombing in Afghanistan the month before.

On the 20th anniversary of 9/11, South County residents shared their stories on surviving the day’s tragic events, as well as aiding the cleanup and recovery efforts at Ground Zero.

Amtrak and Metrolink shut down train services in South Orange County after movement in the tracks along south San Clemente was found.

Nearly 126,000 gallons of crude oil leaked into the waters off Orange County’s coast, prompting the governor to issue a state of emergency and several beaches to close while crews cleaned up contaminated areas where fish and coastal wildlife were threatened.

Gene James retained his position of mayor pro tem after a council majority vote; Councilmember Steve Knoblock had proposed to strip James of the leadership title in the wake of a June 25 confrontation with a sheriff’s deputy that had been recorded.

Hundreds of parents and students protested in downtown San Juan Capistrano, voicing their opposition to Newsom’s incoming mandate that required students 12 and older to be vaccinated to attend school in person.

The discourse continued when CUSD Trustees urged Newsom to reconsider the mandate.

The city of San Clemente, County of Orange and the Orange County Transportation Authority entered into a cooperative agreement that supports three traffic relief projects in South Orange County and prevents the construction of a toll road through town.

Capital riot defendant Alan Hostetter was granted the opportunity to represent himself in his trial.

Protests against a possible COVID-19 mandate for students continued, when families placed hundreds of shoes in front of CUSD offices in San Juan Capistrano to symbolize the number of students who could be taken out of the district.

Santa’s Village by the Sea returned to San Clemente for the first time in two years, as hundreds of visitors attended the Dec. 4 festivities.

California reissued a statewide mask mandate for indoor public spaces starting on Dec. 15; it is scheduled to last a month.

The council voted to amend the city’s crossing guard contract and add five guards to the intersections of Avenida Vista Hermosa with the Outlets and the Interstate 5 on/off ramp.

The city’s ongoing issues regarding e-bikes came full circle, as the council directed staff to provide ordinances prohibiting cyclists from using e-bikes on the Beach Trail and restricting them on the municipal pier.