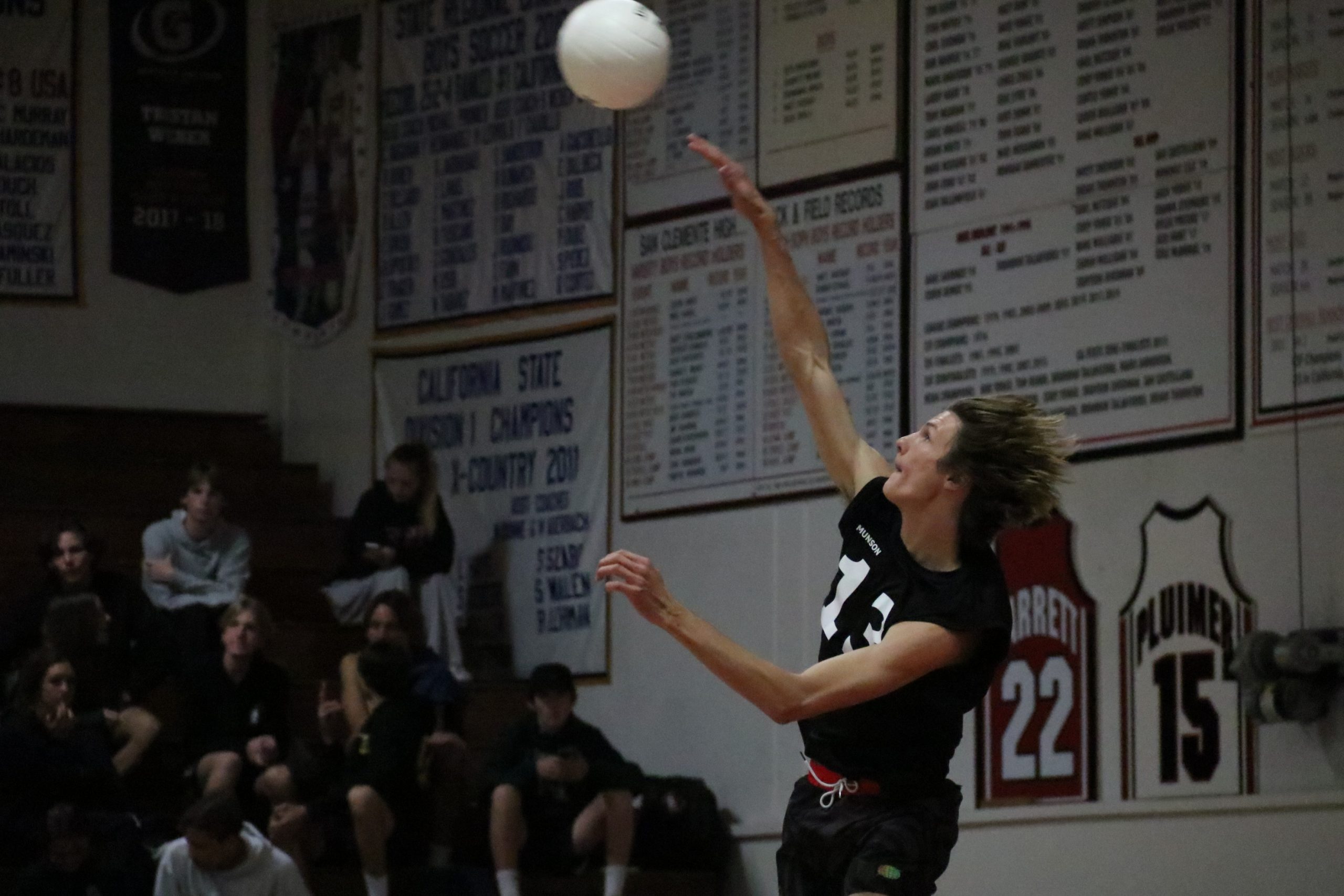 The spring sports season is by far the busiest season of the CIF-Southern Section sports calendar, and it’s even busier in San Clemente.

There are 12 sports widely contested in the spring season, and at San Clemente High School, the Tritons have joined the latest CIF-sponsored sport: girls beach volleyball.

So, with so much to look forward to in this spring 2022 campaign, let’s look at some of the top Triton teams competing over the next three months:

After 22 seasons, there is a new man at the helm of the San Clemente boys volleyball program.

Legendary coach Ken Goldstone stepped down before the school year and left behind a legacy of 13 South Coast League championships and a 514-149 overall record. Goldstone’s Tritons never finished lower than second place in league in his tenure.

Stepping into Goldstone’s shoes is J Bisch, who had been a member of the San Clemente coaching staff for the previous eight seasons. Bisch is a familiar face for the Triton players, which should keep a talented San Clemente group on course for a high level of competition.

“I coached a lot of these guys, a lot of them as sophomores during the COVID year,” Bisch said. “To get back with them has been awesome in general. I’ve already got a rapport with a lot of them. It’s been smooth.”

Bisch has purposely put together a tough schedule to prepare the Tritons for the always tight South Coast League and push toward the difficult run of CIF-SS Division 1. San Clemente may still be figuring a few things out with a 1-1 record, but the path is there.

“We’re on our way,” Bisch said. “We’re looking to put together that complete set still. Sometimes, when you see the way we’re winning like this (against Edison on Thursday, Feb. 24), as long as we’re passing and blocking, we’ve got one of the best setters in the county. We’re in a good spot.”

Leading the Tritons is senior setter Landon Seymour, who is signed to Concordia. Other major contributors will be senior outside hitter Luke Shanafelt, junior middle Luke Ingersoll, junior opposite Brad Munson and sophomore libero Kai Schmitt.

Joining the roster of CIF-approved sports this spring is girls beach volleyball.

There will not be any CIF-SS championships for beach volleyball this season, as there must first be a minimum of 20% of the section’s member schools with a team to have a CIF-SS playoff. However, some teams will still be able to compete for league championships, while others will play a freelance schedule until more teams are added.

It’s been a rough few seasons for the San Clemente baseball team, but there’s hope that a younger group of Tritons can push the program forward.

“Rough” isn’t to say the Tritons haven’t had some talent, but San Clemente’s misfortune only comes in as a member of what may be the toughest public high school baseball leagues in Southern California, with the South Coast and Sea View Leagues.

San Clemente hasn’t had a winning league record in the Sea View or South Coast Leagues since 2015, when the Tritons won the Sea View League at 10-2 with several future MLB draft picks, including Kolby Allard, Lucas Herbert, Andre Pallante, Will Tribucher and Tanner Brubaker.

Despite that, the Tritons have typically put up winning records in nonleague play, but last season was a down year overall for San Clemente with an 11-18 overall record and 4-8 record in the Sea View League.

This season, San Clemente has been led by a balance of younger and older players.

San Clemente is 2-4 in the early season, but their first true test is on the horizon. The Tritons open Sea View League play at home on March 14 against Aliso Niguel and play at Aliso Niguel on March 16.

The San Clemente softball team was another Triton team that said goodbye to a longtime coach, as Bill Malcolm stepped down from the position after eight seasons. Malcolm’s team won four league championships and made the CIF-SS playoffs each year.

Jasmine Watson takes over the position for San Clemente with some NCAA Division 1 experience in her pocket. Watson played at Syracuse University, where she broke the school’s all-time home run record in 2014, and was Division 2 assistant coach at Ferris State. Watson also coaches travel ball.

San Clemente is 2-3 so far this season, with wins over South Coast League local rival Dana Hills (7-6 on a walk-off) and Sea View League foe Capistrano Valley (7-2 in tournament play on Tuesday, March 1).

The Tritons have been led by Sacred Heart-bound senior Samantha Kowalski, who hit a home run and the walk-off single against Dana Hills.

San Clemente boys lacrosse is coming off a season in which the Tritons were on the edge of a season of big competition.

San Clemente finished second in the South Coast League with its only two losses coming to league champion Tesoro. The Tritons also qualified for the first-ever CIF-SS lacrosse playoffs, but San Clemente fell in the first round of Division 1 at Santa Margarita, 12-7.

San Clemente features a younger group this season, but the Tritons will be just as competitive as ever.

The Tritons are led by a pair of returning first-team, all-league seniors at attack in Luke Lemus and Dante Decollibus. In San Clemente’s home opener against Beckman on Feb. 26, Decollibus led the Tritons with five goals and Lemus scored four.

The Tritons won that home opener, 13-9, with two goals each from Aidan Kaffl and Nick Favero and stellar work in net by goalie Andrew Beaulieu.

San Clemente is 1-1 on the season with a loss in its opener to perennial power Foothill. The Tritons hosted San Juan Hills on Wednesday, March 2, but results were not available at press time.

The San Clemente girls lacrosse team made its own history last season.

The Tritons went unbeaten in league play, and in the first-ever CIF-SS lacrosse playoffs, San Clemente won its opener in a thriller over Edison, 8-7. San Clemente lost its next game in overtime, 8-7 against Newbury Park, but history was made nonetheless for the continually rising Triton girls.

San Clemente will need to create new scorers this season, as three of the four leading goal-scorers from last season graduated, but junior Emma Massamiri returns after scoring 41 goals in her sophomore campaign.

The Tritons also return their goalie in senior Brooklyn Hodgin, who allowed an average of only 5.6 goals per game last season.

San Clemente has started the 2022 season on fire with a 3-0 record and has seemed to find its goal-scorers with three blowout victories. San Clemente beat Mission Viejo, 20-5, and Beckman, 18-8, on the road before winning its first home game over Murrieta Mesa, 13-4, on Tuesday, March 1.

Tests will be coming for San Clemente, as the Tritons play at Corona del Mar on March 8 and at Foothill on March 24.

For in-game updates, news and more for all the San Clemente High School spring sports programs, including track and field, boys tennis, swimming, boys golf and STUNT cheer, follow us on Twitter @SouthOCSports.