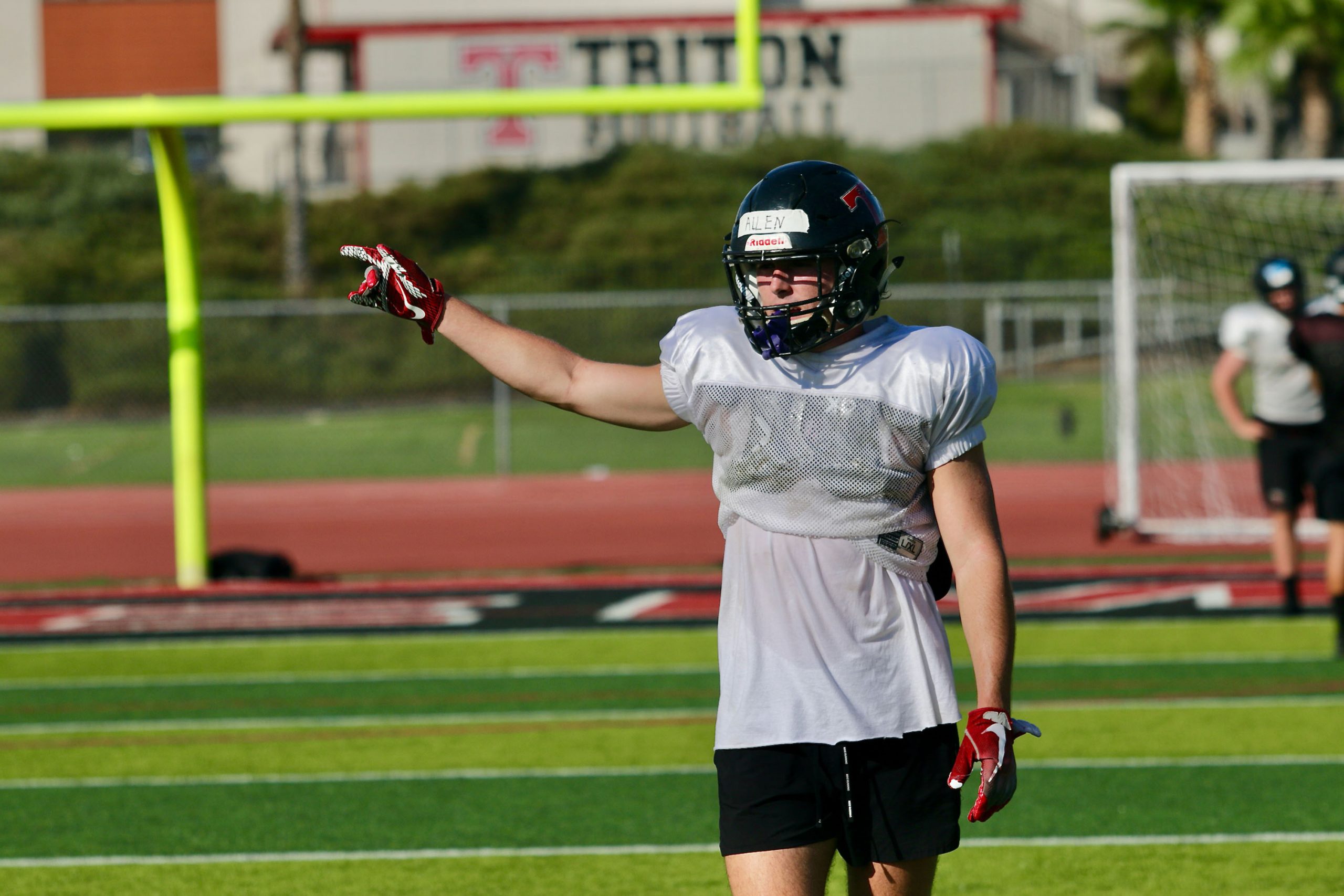 Allen may be the most dynamic offensive threat the Tritons have. Allen was San Clemente’s offensive MVP last season with 779 yards rushing and seven touchdowns on 162 carries. Allen also caught 24 passes for 301 yards and two touchdowns. If the holes get opened, Allen has the burst speed to blaze through.

Bachhuber is a multi-faceted lineman for San Clemente. The 6-foot-5, 240-pound junior will play in all phases of the game for the Tritons. Bachhuber will play right tackle on offense, get snaps as a defensive end and also make the long snaps on the San Clemente special-teams units.

Brophy is the veteran for the San Clemente beef up front. Brophy lines up at 6-foot-2, 220 pounds and will protect the blind side for the Triton quarterback who takes the reins. Brophy said the most important thing for the Tritons is to trust each other, and that starts with the offensive line.

Hartanov is a versatile skill player for San Clemente. He led the Tritons in both receptions (40) and receiving yards (385) last season, with five touchdown catches. Hartanov was also the second-leading rusher with 218 yards and a touchdown on 42 carries. A more physical Hartanov will mostly line up in the slot.

Kotiranta is one of San Clemente’s most dangerous outside threats. Kotiranta was second on the team in receptions last season with 37 catches for 378 yards and a touchdown. Kotiranta is one of the Tritons’ three-year varsity players, who will help pace the bevy of experienced skill players on the roster.

Baker will also join the handful of San Clemente linemen who will play both ways. Baker, listed at 6-foot-1, 250 pounds, will line up at nose guard and offensive guard. Baker is another legacy Triton football player, as his father, Brad Baker, played at SCHS and won a national title at Saddleback College.

Gerken leads the San Clemente defense as a three-year starter who may have the most defensive snaps taken in the secondary. Gerken was second in tackles last season with 65, including 39 solo tackles and 26 assisted tackles. Gerken has worked on his man-to-man and zone coverage in the offseason.

Insley made a name in the Triton secondary as a physical presence on the outside. Insley made 41 tackles, including 26 solo tackles and 15 assisted tackles. Insley starring as a corner is interesting, as his father, Trevor Insley, was a legendary receiver for San Clemente and at Nevada and who also played in the NFL.

Reid joins the litany of experience on the back end of the San Clemente defense. Reid was the third-leading tackler for the Tritons last season with 58 tackles, including 30 solo tackles and 28 assisted tackles. Reid also made impacts up front with five tackles for loss and two sacks.

Robertson was the defensive MVP for the Tritons last season. Robertson led San Clemente with 105 tackles, including 54 solo tackles, 51 assisted tackles and three sacks. Robertson made 20 tackles in the Tritons’ first-round playoff game against Roosevelt. Robertson is an instinctive player who plays fast and physical.