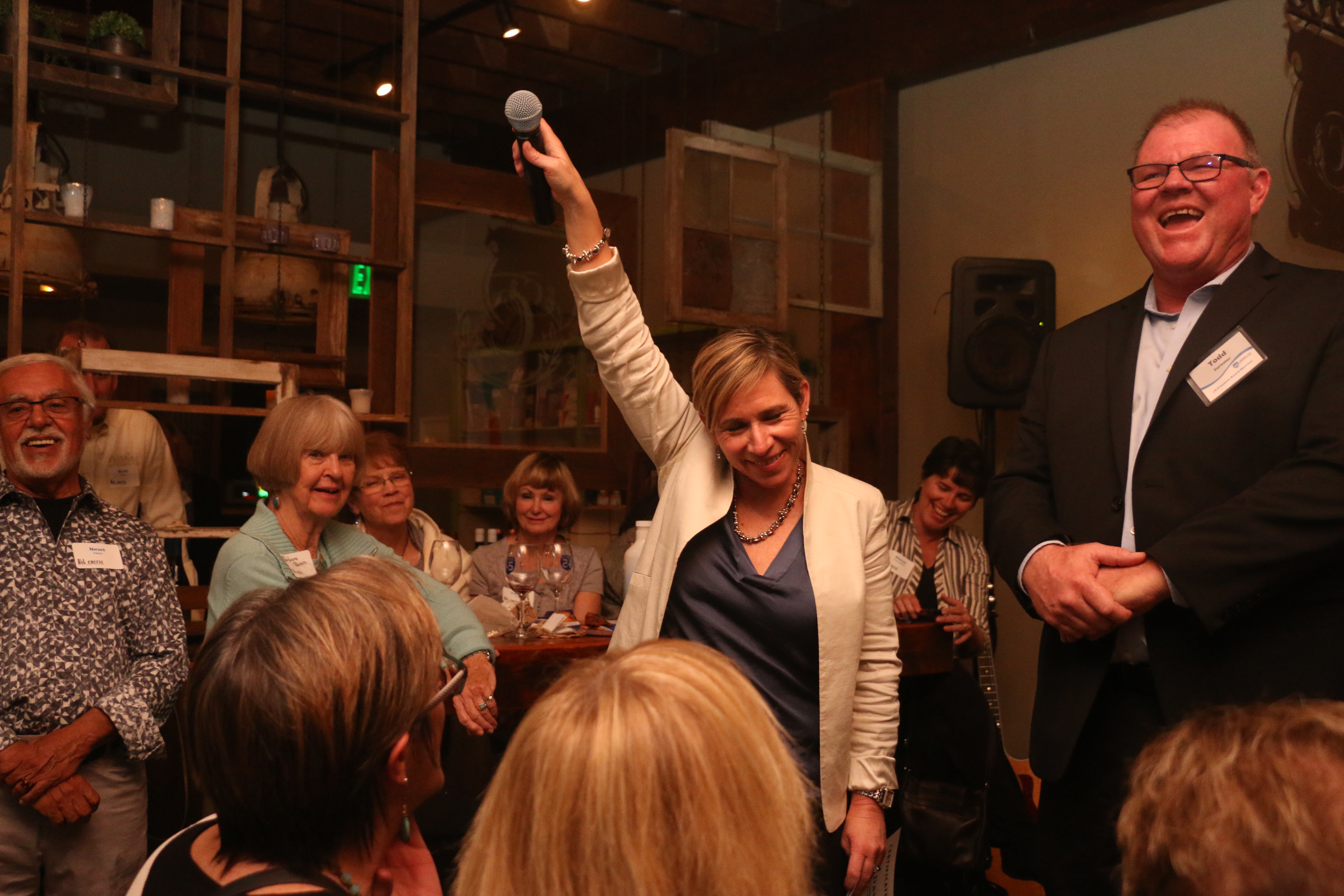 The San Clemente-based i-5 Freedom Network, which works to combat human trafficking in Orange County, hosted a fundraising event, “Be a Big Cheese,” at The Cellar on Monday, Jan. 30, to bolster its future training sessions.

The group trains people to recognize signs of possible human trafficking activities and has developed relationships with organizations such as the California Hotel and Lodging Association to tackle issues.

“The i-5 is a training organization, ostensibly, and we try to raise awareness of human trafficking with community organizations, but the ultimate objective is to train businesses to work within their lane to do something about it,” said Brenda Wells, the founder and president of the i-5 Freedom Network.

The organization is also working with the city to pass laws that would make it easier to address massage businesses that illegally offer sex services.

Brenda Wells, president and founder of the i-5 Freedom Network, speaks to an audience at The Cellar on Monday, Jan. 30, during the “Be a Big Cheese” fundraiser. Photo: Eric Heinz

Brenda Wells, president and founder of the i-5 Freedom Network, holds up the microphone for the audience to respond when she asked them to repeat the National Human Trafficking Hotline number during the network’s fundraiser “Be a Big Cheese” on Monday, Jan. 30, at The Cellar. Photo: File

Todd Forester of the Holiday Inn in San Clemente speaks to the audience about human trafficking and how he became involved with the organization. Photo: Eric Heinz

Councilwoman Lori Donchak, left, gives Brenda Wells, the president and founder of the i-5 Freedom Network, a hug during the fundraiser “Be a Big Cheese” on Monday, Jan. 30, at The Cellar. Photo: Eric Heinz

Wells said Todd Forester of the Holiday Inn in San Clemente has been instrumental in his efforts to alert police of possible human trafficking. She said Forester alerted authorities on three separate occasions where there may have been incidents.

The Department of Homeland Security has been working with the group since it was formed and provides a broader awareness of the issue, Wells said.

“We’re trying to come in and offer a very granular training, a very specific and very targeted training for the industries we work with,” Wells said, adding they work with the Orange County Human Trafficking Task Force as well.

Kimberly Yim, author of Refuse to Do Nothing: Finding Your Power to Abolish Modern Day Slavery, is the founder of the organization San Clemente Abolitionists, which used to meet fairly regularly but has since joined the i-5 Freedom Network.

During the event, Yim told the San Clemente Times she hopes the training the network provides will be available online in the future.

Recently, the i-5 Freedom Network added Spanish language options for hotel training. The group has also created its own training material. Group officials said they can prepare people in 45 minutes to know what signs to look for in their particular field.

City Councilwoman Lori Donchak attended the event and shared a story about a small child and a man who were found in San Clemente. Donchak said the girl had run away from home when a predatory man lured her into trafficking for 90 days.

“If you don’t think it happens here, it definitely does happen here,” Donchak said, bucking the notion that San Clemente’s statistically friendly city is immune to human trafficking. She said the I-5 freeway and other features make the town susceptible to such trafficking.

About 18 months ago, the i-5 Freedom Network was able to get the city of San Clemente to pass a resolution to be mindful of human trafficking activity within the city.

According to an Orange County Human Trafficking Task Force report, trafficking numbers climbed gradually from 2011 to 2013, but seemed to plateau over time. However, the number of new victims was always higher than existing victims in that timeframe.