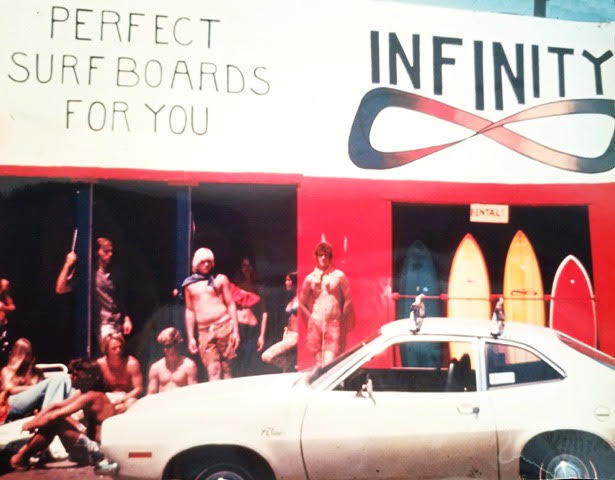 50 Years of Family, Fun and Lots of Surfboards

For half-century, Boehne family has stuck to its roots; Infinity Surfboard Company continues to thrive

There are very few constants in surfing. Styles, trends, board designs—they’ve all changed like the tides over the years, but for the past half-century, Steve Boehne, his wife, Barrie, and their sons Dan and Dave have made sure the Infinity Surfboard Company has endured.

Given where the sport and culture of surfing was 50 years ago and where it is today, it’s a remarkable feat.

Steve shaped the first Infinity Surfboard in 1970 and literally hasn’t stopped since then. Consider this stat: there have now been more than 50,000 surf craft created by the Infinity family—an average of more than 1,000 a year.

But as staggering as those numbers are, what’s most telling about the business is how the stoke remains the same after all of these years.

“My dad’s still doing it, my mom’s still doing it, my brother and I are there; it’s still the same family business it’s always been. We’ve been blessed to be able to do this for as long as we have,” Dave explained over lunch at Bonjour Cafe in Dana Point a couple weeks ago.

Besides a strong work ethic and dedication to their community, humility is also another family trait. The Boehne family has always featured prominently in surfing’s creative intersections, and their roots go all the way down to the sport’s foundation.

Steve came of age in L.A.’s South Bay when Dale Velzy and Hap Jacobs were at the height of their board-making powers. Bit by the bug, by 13, he’d shaped his first board, and after knocking out a few more in his garage, he sought an apprenticeship at Gordie Surfboards in Huntington Beach.

Meanwhile, Barrie was a world champion tandem surfer. Pioneering waterman Pete Peterson was her initial partner before she met Steve. As things go on the beach, love was in the air, and a perfect union was soon formed.

In the unconventional world of tandem surfing, which is sort of like pairs figure skating on a surfboard, their act at San Onofre and Doheny, in particular, was the toast of the town. Together, they won multiple world tandem titles, as well as being featured on ABC’s Wide World of Sports and in LIFE magazine.

In 1971, they opened the first Infinity Surf Shop in Huntington Beach and would eventually expand their retail business to Dana Point, which is where they continue to thrive. The “Boehne bros” came kicking and screaming into the world not long thereafter.

With foam dust in their hair practically since the day they were born, Dan shaped his first board at 11, while Dave took a few more years to get into it, whittling his first blank at 15.

The history itself is impressive, but what’s even cooler is the Infinity mindset. It’s all about exploring the innermost limits of fun.

From tandem boards, to the evolution of the shortboard, surf skis, stand-up paddleboards, all the way to today’s high-tech foil boards, they’ve not only done it all, they’ve embraced it all.

Heck, they even made fiberglass skateboards, and for a while, the Guinness World Record for speed was held by a guy riding an Infinity deck.

“But it’s still more than all of that,” said Eric Diamond, who grew up in Dana Point working at the Infinity shop in the ’80s. “Every summer, when I came home from college, Barrie made sure I knew I could have my job back. She always held spots for the local kids to work during the summers, and I think that says a lot about who she is and what their business stands for.”

If every surfboard has a story, there are a lot of epic Infinity tales out there.

When I told a good friend that I was working on this story, he said, “My dad always rode this red Infinity longboard; he swears it was the best board he ever owned.”

But it’s not just dads on logs. World-class big-wave talents such as Albee Layer and Kai Lenny also turn to Infinity when they’re pushing their respective limits. Albee’s one of the most accomplished surfers at Jaws, as is Kai, who’s a freak on anything he rides, particularly foil and stand-up boards.

To be in business and so well-loved by the surf community for so long doesn’t happen by accident. And it is not just a testament to the quality of craft that Infinity makes; more than anything, it speaks to the love and care that the Boehnes put into every board they make and every surfer they stoke out.