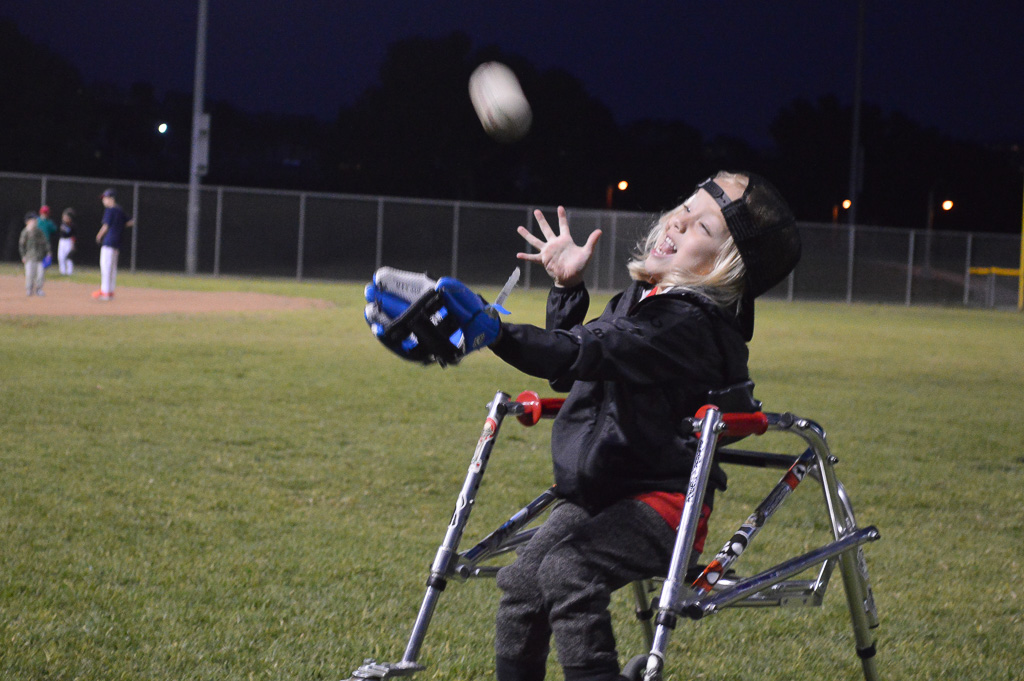 By Andrea Clemett, For the San Clemente Times

Cru said he has been looking forward to kicking off the baseball season this spring. During practice, when he heads to the plate to bat, he uses his walker to support his legs to stand as he swings at the ball on the tee. He then propels himself down the baseline with his stainless steel apparatus, ready to round the diamond.

Cru has a type of cerebral palsy that affects his hamstrings called spastic diplegia. He was born prematurely at 26 weeks and contracted pneumonia while in intensive care, which caused a brain bleed that resulted in cerebral palsy.

Over Christmas break, Cru battled a staph infection in his legs and was placed in a hip-to-ankle cast. He frequently uses his knees for the majority of maneuvering around on his own, and the constant friction led to a flare-up of the infection. His mother, Karisa Mercuro, said Cru may feel fine during the day, but at night he struggles to sleep when he experiences intermittent waves of painful spasms. Cru’s physician advised the family that his condition will progressively become worse because his muscles will become tighter over time, resulting in more challenges to maneuver in daily activity.

Cru Mercuro, 6, uses a specialized walker to get around. He suffers from a rare form of cerebral palsy, and local residents are gathering to help raise money for his surgery. Photo: Andrea Clemett

“Cru is the happiest kid with a great attitude in life, and that’s what makes it so sad, when you see a 6-year-old in pain,” Karisa said. “He may not be able to do all of the things with friends that he wants to do, but he’s a trooper and always finds ways to make it work.”

Research led Karisa to find Dr. T.S. Park of the St. Louis Children’s Hospital, who specializes in selective dorsal rhizotomy (SDR) surgery. The procedure is recommended before a child reaches 8 years of age.
As Cru grows, he may be unable to support himself, which could result in his needing a hip replacement or back surgery.

With the hope of raising money for a surgery that can be life-changing for Cru, his mother started a GoFundMe page with a goal of raising $75,000. She also shared Cru’s story on Instagram, catching the eye of Delaney Moody, a 15-year-old San Clemente High School student.

“I spoke with Cru’s mother about my idea to start an Instagram for Cru called @crus.crusaders to raise donations. I went to high school students and asked for donations,” Moody said. “Slowly the word spread, and then people started direct messaging me wanting to contribute and help.”

Moody then began receiving donations from local businesses to create a live auction that will commence on Instagram @crus.crusaders, where bidders can comment in the post of the desired item. Bidding begins at 8 a.m. on Friday, March 15, and closes at noon on Saturday, March 16, where donations paid via Venmo will contribute to Cru’s surgery.

Mercuro said that Cru’s condition doesn’t qualify him for subsidized disability insurance such as Medicaid. The family expressed gratitude that he does not suffer from additional ailments, such as those involving cognitive or fine motor skills; however, paying for surgery and equipment out of pocket would be very costly.

“I deeply appreciate everyone who is fighting together to change Cru’s life,” Mercuro said. “He tries so hard to do everything on his own and is very positive about it.”