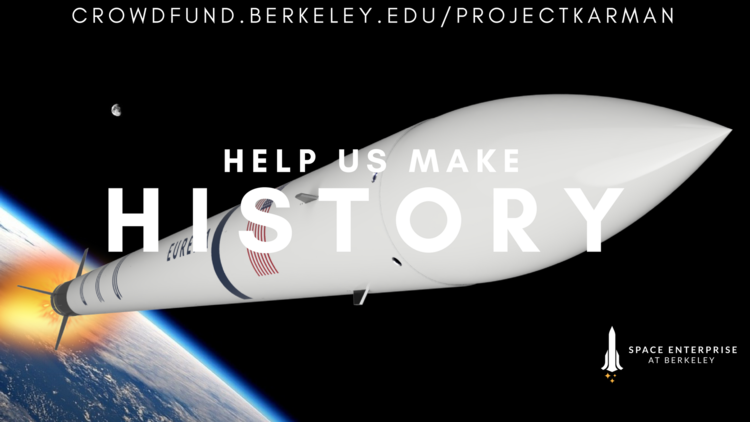 A great divide between engineering and other disciplines prompted a college club at the University of California, Berkeley to include people with various academic backgrounds to collaborate on a rocket that the club intends to launch in 2018.

The project, known as Project Karman, is building a rocket that would travel 575,000 feet just before exiting the Earth’s atmosphere and then return back to earth at a safe speed by parachute. The name of the rocket is EUREKA-1.

Autumn Kleinman, a recent San Clemente High School graduate, is an example of the inclusive nature of the club. Kleinman said she doesn’t really have the technical background to work on the rocket (she’s majoring in political science), but says she has always been fascinated with space exploration. Her role in Project Karman is its marketing manager.

“We would be the first college team to build and fund the rocket itself, and that would demonstrate the ability for students to do things that were once exclusive to government and nonprofits and larger funded organizations,” Kleinman said.

Kleinman said the club was designed last year, but started as a “fragmented team.” There were many different people who were getting involved, but it wasn’t structured to the point where they were ready to collaborate on building a rocket.

“I went to a space policy debate event on campus and talked with one of the members and asked if there was a role for me, and they intentionally wanted to make it multidisciplinary and to be accessible to people of all majors,” Kleinman said.

Eric Pillai, the chief technical officer of the club and the head of the design branch, is an industrial engineering student who helped commence Project Karman. He said the ability to send a rocket to suborbital space has been possible since 1943, however, it has not been done by a college club.

“The challenge is getting that $1 million budget…and the overall point is to really make it cost-effective and environmentally sound,” Pillai said during a phone interview on Oct. 9. “The real multidisciplinary stuff came together this semester, as a one-man design team is not the best idea, even when the person is 100 percent qualified. So we wanted…to take (ideas) from something one person can do to make something that’s ready to fly.”

The organization is trying to raise funds for the project through crowdfunding on its project website. The rocket needs $250,000 to be completely funded on the students’ end, and grants and other donations will cover the rest of the cost.

As a way to motivate other colleges to get involved, Project Karman is challenging other students to enter what they call “the college space race” to see who can launch a rocket first. But Project Karman may already have the upper hand, with sponsorship and support from NASA and various science and research organizations.

“We’re in the midst of World Space Week, and we’re trying to use social media to let people know about Project Karman and to challenge other schools to independently do similar things,” Kleinman said.

The rocket would presumably be launched from Spaceport America in Sierra County, New Mexico in 2018.

For more information about the project, visit www.berkeleyse.org/eureka1/.