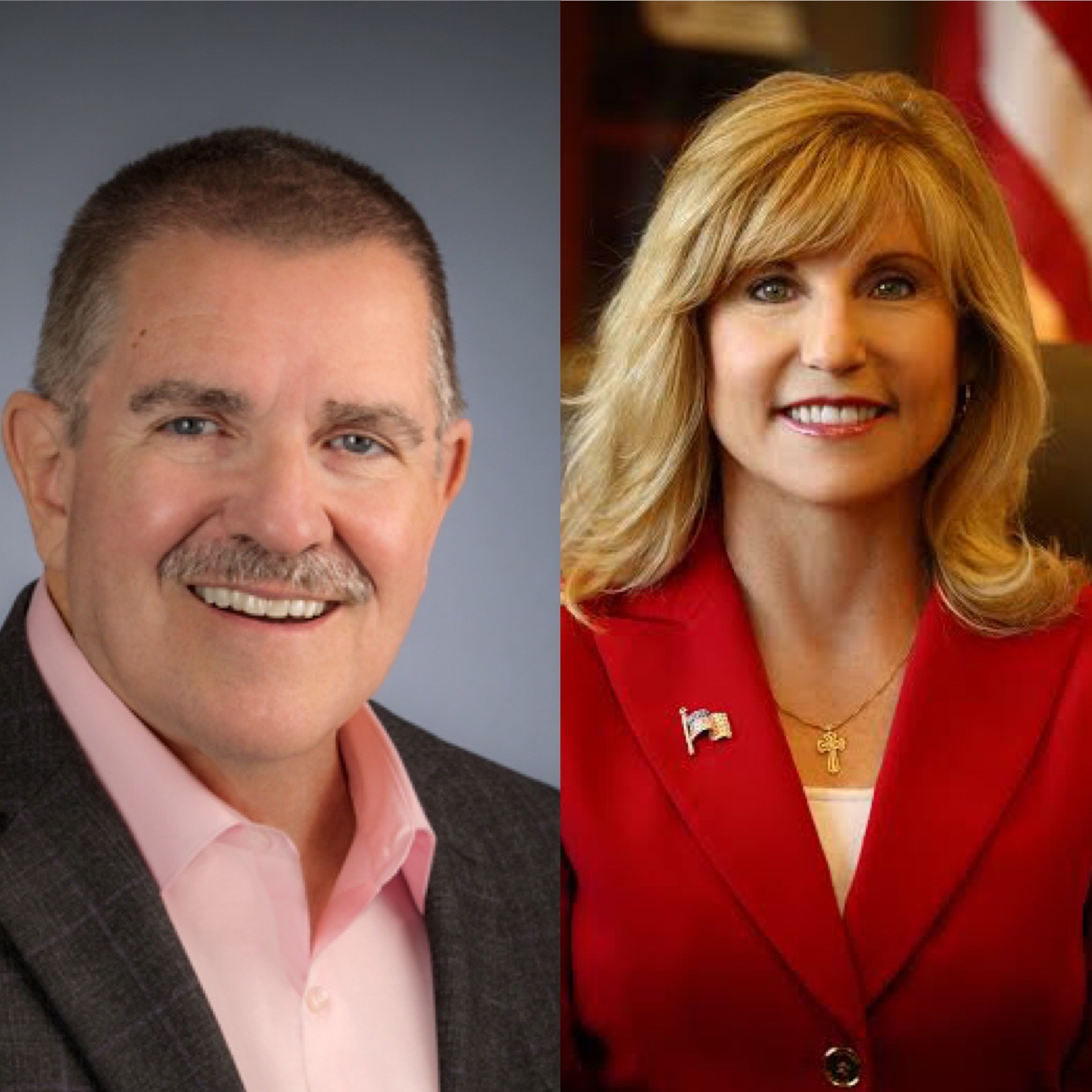 73rd District Will See a Newcomer to State Assembly

For the first time in three terms, the 73rd District Assembly seat will be filled by one of two newcomers to the State Legislature. Scott Rhinehart, a Democrat, and Laurie Davies, a Republican, will face off on Tuesday, Nov. 3.

It was the year 1978 when Scott Rhinehart was crossing the Golden Gate Bridge and heard the car radio report that Harvey Milk, the first openly gay elected official in the history of California, had been assassinated.

That evening, Rhinehart attended a candlelight vigil that attracted thousands at city hall. Rhinehart says the tragedy played a pivotal role in the launch of his activism, which was emboldened by the HIV/AIDS epidemic. But the foundation of Rhinehart’s politics arguably was formed throughout his childhood, with his father’s involvement in labor organizing.

“I was born into a working-class family in a small, coal-mining town in eastern Utah,” Rhinehart said. “My uncle was killed in a mine, and that led my dad toward labor organizing. I was raised in a union home, and my dad was involved with one of the first unions of this nation. I learned about the power in organizing and the importance of giving those who don’t have a voice, a voice.”

Now, Rhinehart is vying for the 73rd California Assembly seat as a Democrat, just as he did unsuccessfully in the 2018 race. Then, he faced incumbent Assemblymember Bill Brough, who secured the seat for a third term and beat Rhinehart by nearly eight percentage points.

However, in 2019, Brough faced a series of sexual misconduct allegations brought against him and was subsequently unseated for a fourth term during the March Primary Election. Laguna Niguel Mayor Laurie Davies, a Republican, took the majority of the votes with 27.3%, followed by Rhinehart, who took in 23.8%. There were five candidates total (three Democrats and two Republicans).

Rhinehart’s platform calls for a single-payer Medicare system in the state and the prioritizing of funding for education.

“We are the fifth-largest economy in the world, and yet we are the 41st state in per-pupil-spending,” Rhinehart said. “In the Assembly, I will prioritize educational funding from Pre-K to our Community and State Colleges and Universities. We must ensure our teachers are always supported, and our students have the resources and opportunities to thrive.”

Since the state shutdown in response to COVID-19, Rhinehart says that his campaigning efforts have had to adapt but that the pandemic has reinforced his beliefs.

“Grandmas and grandpas shouldn’t have to die. The number of deaths we’ve seen and the inadequate response . . . we need to learn from this pandemic and be prepared,” Rhinehart said. “We can take these lessons and apply it to climate change. We need to be prepared.”

If previous elections are any indication of this year’s voter results, Rhinehart faces an uphill battle at the polls. In the 73rd District, there are 121,963 registered Republican voters, compared to the 86,027 voters registered as Democrats.

Rhinehart counters that a Democrat in the 73rd district seat would better serve constituents, considering the state’s supermajority.

“We live in a state that is Democratic; our Senate and Assembly are Democrat. Who will be more likely to bring in new jobs, more sources of funding since we are a donor state, who is going to be successful in leveraging that money back to us? It’s time for all people in the 73rd to be represented in Sacramento, not just for special interests to be represented.”

Laurie Davies says she can thank her parents for instilling within her the value of hard work—the work ethic that pushed her to attend college full-time while waitressing nights and weekends, start her own business and embark on a career in politics.

After graduating, she relocated to Orange County, where she worked as the general manager for two restaurants and went on to handle the events at the private Monarch Bay Beach Club in Dana Point.

In 2000, Davies started her own event planning business, Five Star Wedding & Events, which she still operates today. Being a small business owner, Davies said she knows firsthand the toll that COVID-19 has had on the economy.

“As a small business owner, my business has taken a halt . . .  as an event planner, you plan in advance. Basically everything is canceled. But it’s looking positive; it’s going to be a very busy year next year.”

As Mayor of Laguna Niguel, Davies says she constantly gets calls from people who are worried about how the pandemic is shaping their lives.

“As mayor, it’s devastating when people are calling me about how COVID is impacting them and they don’t know what to do. To hear the pain in their voices, that’s the hardest part.”

Davies says she’s had to think outside the box when it comes to campaigning and fundraising.

“You have to be willing to try something new,” Davies said. “We took advantage of Zoom to build those relationships, and it’s worked.”

With both houses in the legislature having a Democrat supermajority, San Clemente Times asked Davies how she anticipated working across the aisle to best represent the interests of the 73rd District.

“I’ve always been someone who likes to build relationships, building trust, listening,” Davies said. “I’m one that likes to solve problems. We’ve got a lot in common.”

During her time in office, Davies has served as a director on the Transportation Corridor Agencies, chaired the League of Cities Committee on Transportation, Communication and Public Works, and was elected to the Orange County Transportation Authority.

Some San Clemente voters are weary of associations with the TCA, after a long history of contention the city has had with the agency over a proposed toll road being built through the area.

In March, TCA officials confirmed that out of all of the proposals for South County traffic relief, an arterial, un-tolled road—also known as the Los Patrones extension—would be the sole alternative that staff would pursue. The action formally removed the possibility of extending the 241 Toll Road through San Clemente.

TCA is now collaborating with Caltrans and OCTA to advance plans of having the high occupancy vehicle (HOV) lane on the I-5 extend from Avenida Pico to the San Diego County line, as well as complete the project to widen Ortega Highway in San Juan Capistrano.

“OCTA and TCA came together and listened to the people. Listen, no matter where you are, mobility is important. In the case of a disaster, to me that was always my first priority,” Davies said. “I would not put a toll road through a city; I think we’re going to see these three measures have some good results. It comes down to listening to residents, developers and stakeholders.”

Davies says her top priorities, if elected, are to help small businesses and to repeal early release for felons.

“Small businesses make up our community. I will work toward creating business-friendly laws and work toward repealing Assembly Bill (AB) 5,” Davies said. “Safety is a priority. When there is early release for repeat offenders, we are putting residents at risk and having impact on homelessness.”

While speaking with voters, Davies emphasizes the importance of learning about propositions on the ballot, in addition to the candidates.

“COVID has made all of us have to stop; we’re paying attention more,” Davies said. “But I really believe the blindfolds have been taken off. I’m seeing what my kids are being taught, I’m seeing what the governor is doing and how businesses are closing. People are waking up, and no matter how they’re going to vote, they’re going to be a lot more informed. We’ll just have to wait and see the results after Nov. 3.”

The 73rd Assembly District stretches from the coast to the Santa Ana Mountains, and includes cities of Dana Point, San Clemente and San Juan Capistrano.