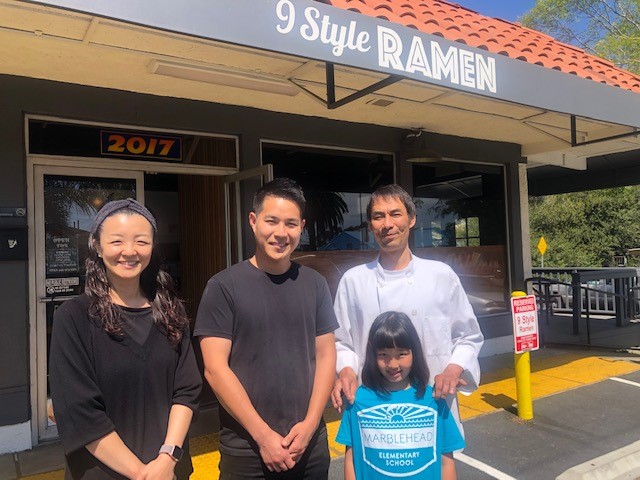 Opening 15 years after his first restaurant debuted in 2006, 9 Style Ramen features Kyu’s own adaptation of broth and ramen dishes that he originally learned while working at a Tokyo ramen shop as a young man.

“I love ramen,” said Q, whose name translates to the number 9, which is why his restaurants are 9 Style—in other words, Q’s Style. “I used to work at a ramen shop in Tokyo, and I know how to make it. A lot of people who said they wanted ramen would have to drive out of town to Costa Mesa and other places, so I wanted to do a restaurant here. I just wanted to do my style.”

Q and his wife, Erica, opened the new restaurant in South San Clemente in the old Pipe’s Café location in mid-March. Opening a restaurant in the midst of the pandemic, while operating another at diminished volume, was difficult, but the family managed to get through thanks to their legions of supporters.

“Last year was really tough after the lockdown,” said Q, who first moved to Huntington Beach from Japan in 1996 because of the waves—he wanted to be a professional surfer. He worked at a sushi bar in Laguna Beach before moving down to San Clemente in 2006 to open the sushi bar.

“The people of San Clemente have supported us,” he continued. “They’re so friendly, and the community has really supported us. Our takeout business did well. We could survive. We love San Clemente.”

Offering a menu featuring four ramen dishes (all with spicy options), including a vegan option, and a variety of appetizers, the restaurant owners stated that the secret to a great ramen bowl is the broth.

“The broth is critical,” said Erica, who helps run the 9 Style Ramen location with manager Ryosuke, and is also oftentimes joined at the restaurant by her and Q’s 8-year-old daughter, Peyton. “It takes six hours to make the broth. We so proudly make the broth. It’s the 9 Style recipe. There’s a basic broth, but Q makes it his own.”

With the second business now fully operational, the family is excited about the new venture and eagerly awaits the June 15 reopening of the state’s economy. Indoor seating is available currently, and they are awaiting approval on their liquor license application.

“Business is going good so far,” said Q, who splits time between the two businesses. “We just got started, but it’s going well.”