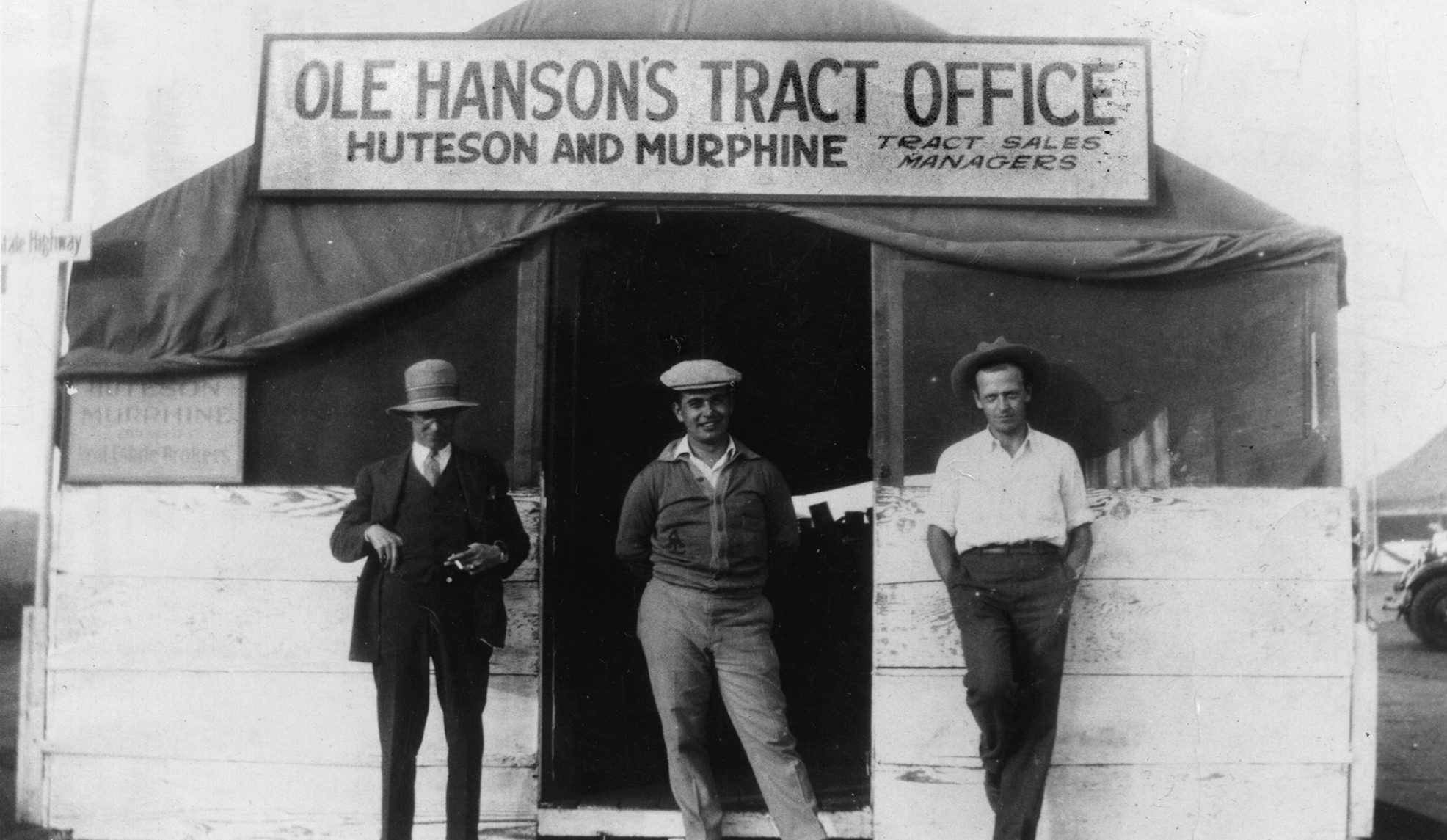 90 Candles: San Clemente to Celebrate Its 90th Anniversary on Saturday

Call it fate or optimal planning, Ole Hanson rolled into what would become San Clemente 90 years ago with the idea to create his own utopia.

On Saturday, Feb. 24, San Clemente is going all out with a celebration of the city’s 90th birthday, celebrating the old with the new.

Pulling pieces of the city’s history from a storage container, which houses all of the San Clemente Historical Society’s documents, board members Larry Culbertson, Raad Ghantous and board sectary and archivist Mary Ann Comes explained how San Clemente came to be.

Pictured: Seacliffs Villa in the foreground and the Bartow house in the background. Houses were designed in the Spanish Colonial Revival architecture seen abundantly throughout San Clemente

“Ole would advertise land tracts in newspapers in San Diego and Los Angeles, and people would come down and get a chicken dinner and the sales pitch. They could mark off lots if they wanted and put down their deposit,” Culbertson said. “When Ole Hanson drove through here in the 1900s, nothing existed between San Juan Capistrano and Oceanside. He cooked up this dream that he wanted to have a ‘Spanish Village by the Sea,’ and unlike so many other developers, he wanted to have a clean slate.”

Pope St. Clement was the inspiration for the town’s namesake, which was dubbed by Sebastián Vizcaíno of Spain.

“According to the family, there is a place in Spain that (Hanson) kind of liked, but from a developer’s perspective, the Panama-California Exposition in 1915 established Spanish colonial revival (SCR) architecture as a very viable brand to California…that would be easy to build and was unique to the southwest.”

Hamilton “H.H.” Cotton was a primary financier of the land deeds, which had been exchanged several times before Hanson started selling the idea of development to investors.

“The interesting thing about Hamilton Cotton that doesn’t get covered a lot is that Cotton was actually married to a lady by the name of Victoria. Victoria’s father is Carson of the city of Carson,” Ghantous said. “Her grandfather is one of the original landholders from the Spanish crown. So Hamilton Cotton was connected through his wife. It’s interesting how this ties into everything.”

Three men pose for a photograph in 1925 in front of a tent tract office. San Clemente’s official birthday is Feb. 8, 1928. Photo: Courtesy of the San Clemente Historical Society

Miss San Clemente travels on a float, circa 1950s or 1960s. The parade would travel down Avenida Del Mar and was often accompanied by Marines from Camp Pendleton. Photo: Courtesy of the San Clemente Historical Society

An industrial area of San Clemente, pictured in the 1940s, near what was then Avenue Pico, became the location of the Reeves Ranch, owners of the city’s first industrial businesses, Reeves Rubber, the San Clemente Dairy and a furniture factory. Photo: Courtesy of the San Clemente Historical Society

The Aquarium Café was built after the depression and pumped in salt water from the ocean to its various built-in fish tanks. Later, the location became the Anchor Inn and several other restaurants following. Photo: Courtesy of the San Clemente Historical Society

At Casa Romantica Cultural Center & Gardens, which was once Hanson’s house, there are items from China and Spain and other places he had traveled. Much of the SCR architecture still exists in San Clemente today, and there are areas of the city that are zoned for residential and commercial SCR architecture only.

“He had done other developments in other cities, but when he did San Clemente, he was 50 years old and wanted to do something, I think, that would last,” Culbertson said. “He envisioned white walls, red-tiled roofs and somewhere people would live in peace and happiness.”

Culbertson said when people bought deeds to their land, Hanson had already worked out the master development of the Pier, miles of trails and other amenities of the town.

From then on, people continued to buy property in the town that was designed with the contour of the land, in order to keep views and open space as unrestricted as possible.

Unfortunately, even if the entire newspaper was dedicated to San Clemente history, we’d just scratch the surface of the city’s story. To read more about San Clemente, visit with the San Clemente Historical Society or read Images of America: San Clemente, a chronological history of the city.

San Clemente Day will take place every last Saturday in February after the San Clemente City Council established the day in 2017.

Mayor Tim Brown said because San Clemente is such a special place to him, he said the day will celebrate all of the aspects of the city. The celebration is in its infancy but will continue to grow and honor the history of the city.

“We’re probably going on our fifth generation, in terms of people born and raised here who now have kids of their own,” Brown said. “I think it’s a wonderful place for families, and San Clemente Day is about all of the things we love about San Clemente and to recognize the people who founded it and built it. It’s a great day to take a pause and learn a little bit more about our beginnings because I think it will help us moving forward in the future.”

Brown said the history of San Clemente has shaped the town for the future through Ole Hanson’s development.

“I’ve become more appreciative of how the history of San Clemente has guided the way things are,” Brown said. “It really is just understanding a lot of our DNA as a city. The way we’ve grown has become very clear, and I think people get that—why we’ve kept our small-town charm and how we’ve been able to still have that look and that feel of what we really love about San Clemente.”

Brown is actually a transplant to San Clemente, but took root to the city when he married his wife.

“What doesn’t change is the reason why people come here. Even if they come here and are motivated to do different things, they’re drawn here because of its essential charm,” Brown said. “It’s a sleepy beachside community, and in a state that’s growing as much as California, that’s hard to find.”

Editor’s note: All photos in this story are the property of the San Clemente Historical Society, used with permission. No republication or replication of these photos is permitted.