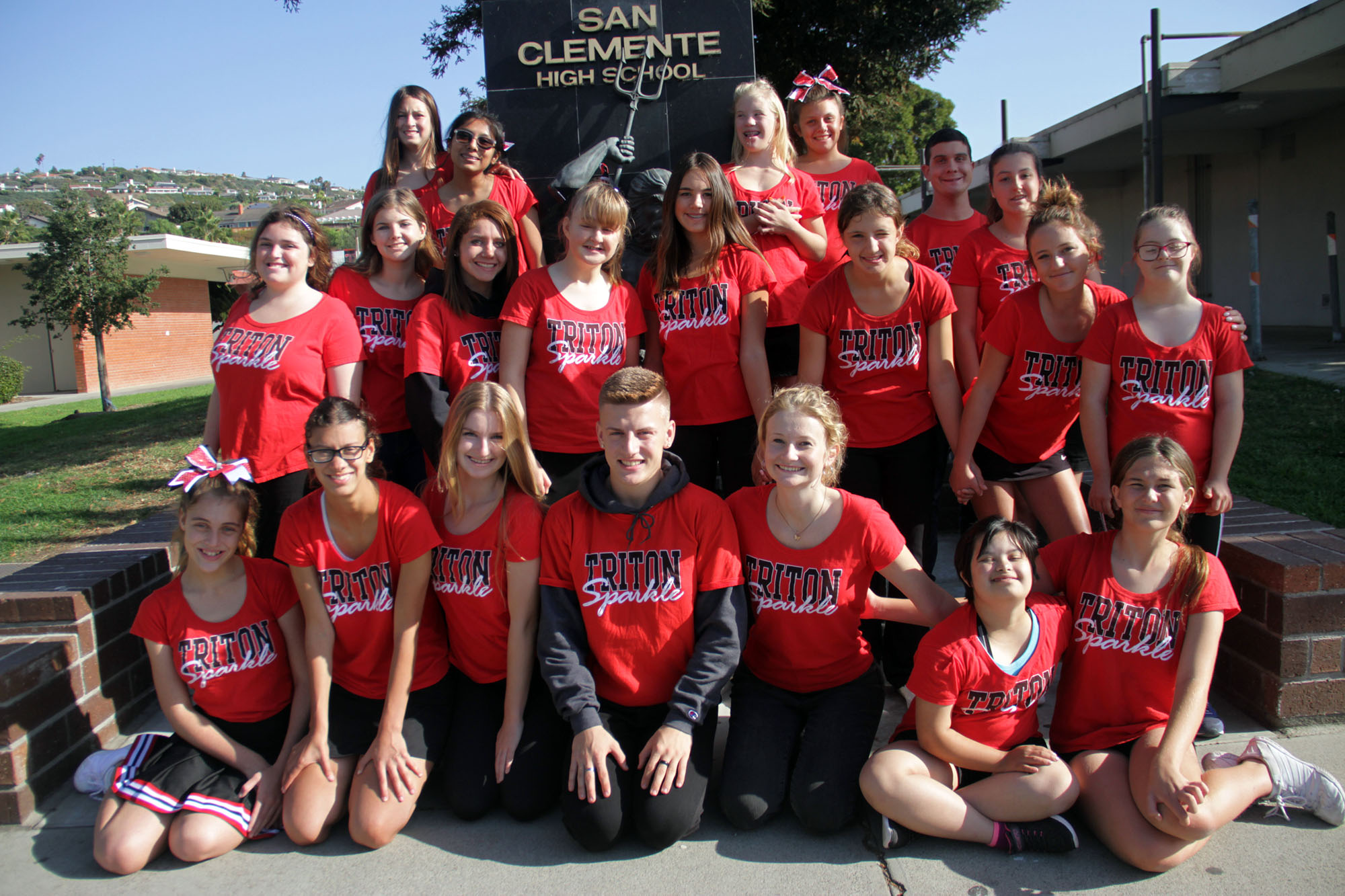 A Chance to Sparkle

Every Monday and Wednesday afternoon, after the final bell rings and classes let out for the day, about two dozen students can be found practicing cheers and chants near the Triton statue at the front of San Clemente High School.

One would imagine it’s the school’s cheerleading squad working on their routines in preparation for the next major sporting event. However, it’s actually a separate rallying crew.

Though similar in nature, these students make up the Triton Sparkle team, an all-inclusive group comprising teens with disabilities, as well as those without, from all four grade levels.

“It’s a completely separate program (from the cheer squad). We have an all-inclusive cheer team—half with disabilities and half without,” said Loren Shrader, a special education teacher. “The students without disabilities kind of serve as mentors, and so we cheer at games where the typical cheerleaders would not.”

The Triton Sparkle team, currently in its first year at SC High, is one of about 220 Sparkle Effect teams offered at schools throughout the nation. The Sparkle Effect is a national organization that works with schools to create their own team to include those with disabilities so they aren’t left out of a team-building experience during high school.

So far, San Clemente High is the only school within the Capistrano Unified School District to offer the Sparkle Effect program, but Shrader said she’s working to encourage the district to get more schools to adopt their own Sparkle squads.

The program is important, Shrader said, because it offers “inclusion, not only for the school but the entire community.”

“I feel like these students, when they’re out here, they’re getting acceptance,” she said during the team’s practice on Monday, Oct. 14. “Not only in their classrooms, but outside in the entire community, they’re building confidence and self-esteem, and it’s helping everybody on the team, with or without disabilities.”

One such student who has benefited from the program is SC High senior Andi Nelson, one of the team’s three captains.  Nelson, who is a teacher’s aide for Shrader, plans to become a special education teacher in the future, so the group, she said, has given her invaluable experience.

“Working with the cheer kids was a big eye-opener and also helping (Shrader) with the special needs,” Nelson said, noting that she’s also a student in the special-needs program, as she has Attention Deficit Disorder (ADD).

“I had the worst anxiety ever in the past, and that’s what kept me having to be in a smaller classroom,” Nelson said. “Being in this has helped me build up my confidence to where I’m strong and able to teach and help people, and it’s really great.”

Around the campus, particularly on game days, Shrader said, the Sparkle Team members have received a lot of support from their fellow students.

“They’re so excited to see them: ‘Oh, the Sparkle Team is coming!’ ” Shrader said. “And they have teachers going up to support them and other classmates.”

When the team was first announced to students, Shrader said she had only about 10 of them sign up. But the team has since grown to 25 students.

Shrader said that the team encourages participation from the students and their parents by letting them know it’s all about confidence and self-esteem building.

“You’re a part of this school, you’re representing the school . . .  you get a uniform, you get to cheer at the games, we’re going to do parties, fundraisers,” Shrader said of how she inspires students to join, adding: “It’s a program that’s inclusion (and) equality.”

When the San Clemente High School freshman football team takes the home field in the afternoon on Thursday, Oct. 17, they’ll be cheered on by the Sparkle Team, as well as the school’s cheer squad, Shrader said.

The game is scheduled to start at 3:15 p.m. at San Clemente High’s football stadium.