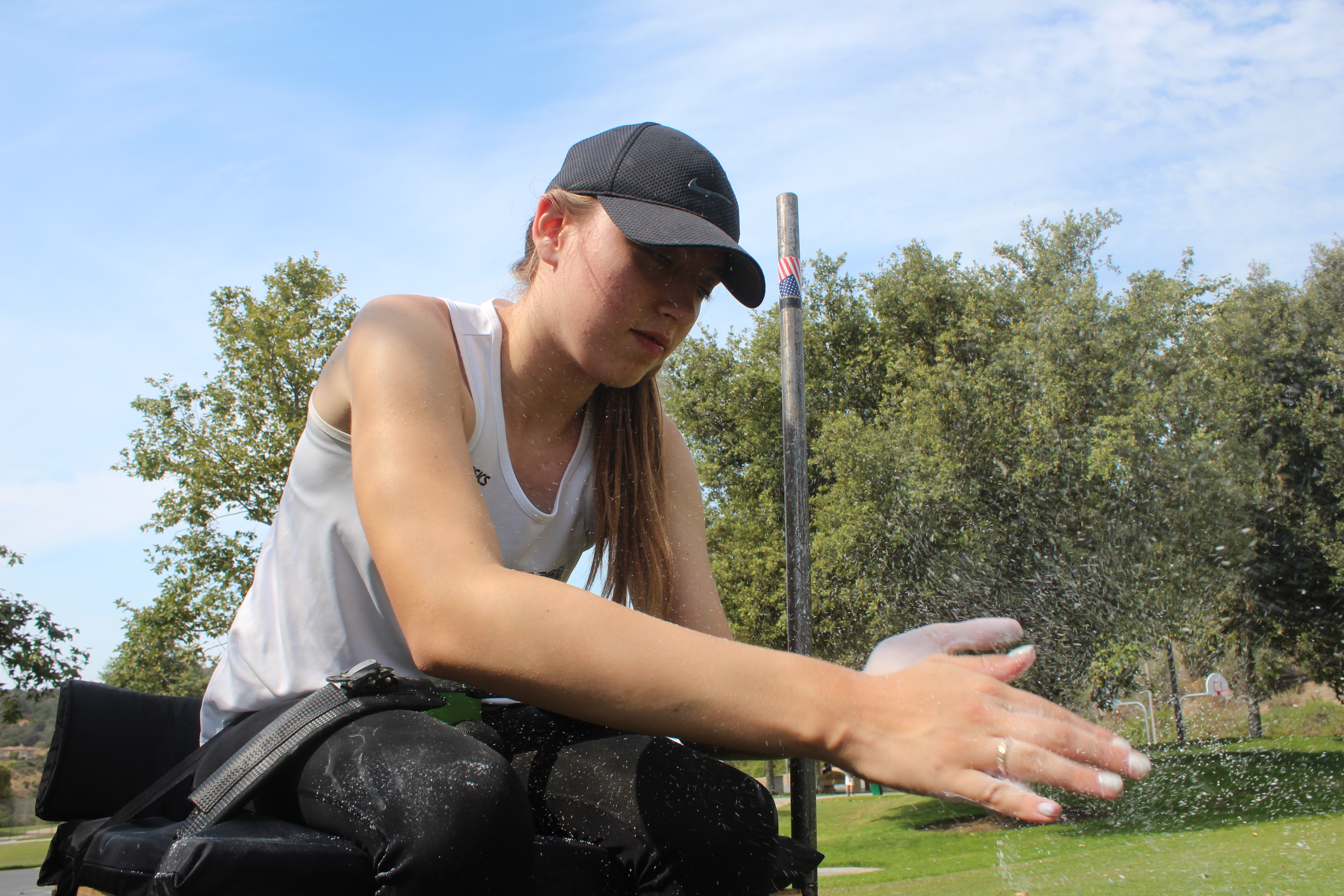 When she was in second grade, Kendall Stier’s teacher asked her a question that remains etched in her memory to this day.

“What do you want to be when you grow up?” the teacher asked.

It is a question one hears often in life but Stier has always issued the same reply.

“I want to be a Paralympian,” Stier responded.

Stier, 15, was born with cerebral palsy, a neurological disorder that impairs motor function. It can be a major hindrance for anyone with such lofty, athletic goals. But despite her disability, Stier is on track to make good on her childhood dreams.

Before the start of the 2016 high school track and field season, the CIF—the prep sports governing body in the state—declared that disabled student-athletes would be allowed to compete in certain track and field and swimming events for the first time ever.

As a freshman at Saddleback Valley Christian School, Stier joined the Warriors track and field team and decided to compete in the seated shot put event.

It only took Stier a few months before she found herself in Veterans Memorial Stadium in Clovis, competing in front of thousands of people at the CIF State Track and Field Championships, where she took home first-place in girls seated shot put and set a state record with her 11-foot-3-inch throw in the finals.

Stier, a San Clemente resident, has been invited to compete in the upcoming Angel City Games, one of the largest Paralympic competitions on the West Coast, in Los Angeles on July 7 and will head to Madison, Wisconsin, to compete in the National Disabled Junior Olympics one week later.

It’s been a whirlwind ride for Stier, who originally joined the track and field team because she wanted the opportunity to finally compete alongside her twin sister, Madison.

Kendall grew up watching Madison play sports and got involved whenever she could. Kendall took up cheerleading and soccer, but always felt like she couldn’t reach her full potential in those activities. It wasn’t until she discovered shot put that she found her true calling.

“I was just very strong at it. I had no weaknesses and since it was seated shot put I didn’t have my legs to hold me back like other sports,” Stier said. “But since my arms are so strong shot put just felt good.”

Shot put is a sport that involves strength, coordination, balance and timing—factors that Stier had to master while performing on her custom-made throwing seat, which was welded together by local Wounded Warriors from Camp Pendleton in San Clemente. When she throws, Stier is strapped in and the chair is tethered to the ground to prevent it from toppling over.

When she is ready to throw, Stier grips the nearly six-pound metal ball and braces her body for what’s to come next.

Stier cannot use much of her lower body strength because she is seated, which means her upper body needs to work double time in order to heave the ball as far as possible. She grips a pole that is welded to her chair with her left hand, the ball tucked against her neck with her right. She doesn’t rotate back in a hurry, but every move is calculated. She stops at a certain spot on the way back, much like a golfer stopping at the top of a backswing. Her left arm becomes fully extended, and she is ready to unload her power from the right side. She whips her body back around from where it came and extends her arm and flicks her wrist, sending the ball sailing down the target line.

It’s a repeatable, efficient move that has brought her so much success that she is eyeing a new dream. Stier wants to catch the eye of the USA Paralympic team coaches and qualify for the 2020 Paralympic Games in Tokyo.

While Stier has found success, she is well aware of the uphill battle that many disabled athletes face on a daily basis.

When signing her daughter up for the SVC track and field team, Shannon Stier, Kendall’s mother, learned that the team’s budget could not account for a disabled athlete traveling with the team. Because the stipulation that disabled athletes could participate in 2016 was so new, SVC could not anticipate how many disabled student-athletes would join and did not plan accordingly, Shannon said. Kendall could join the team, but it was going to be an uphill trek if she was going to compete on a consistent basis.

In order for Kendall to compete, there needs to be a certified representative from the school present, so Shannon went to Cerritos College and became a certified para sports coach/consultant and obtained USA Track & Field level 1 certification.

The Stier family had to pay for all of Kendall’s custom-made equipment and Shannon drove, delivered and set up Kendall’s seat at every local track and field meet.

The Stiers, who live in San Clemente, said they are lucky to have the support from the community, which has helped them along the way. But many are not so lucky. Shannon saw several student-athletes compete in seated shot put using barstools or lawn chairs this past season. Funding, Shannon described, has become one of the major hurdles disabled athletes need to clear if they want to compete.

Shannon and her husband, Mark, have a deal in place with their daughters: If you want to play a high school sport, you have to pay half of your team fees to prove you are dedicated. Kendall ran countless garage sales, sold lemonade and logged hours of pet-sitting in order to raise enough money to meet her half of the bargain

Now that the doors are open and they can compete alongside their able-bodied peers, the Stiers are anticipating more and more disabled athletes like Kendall will follow suit.

“It’s tough when you’re the first. We’ve got a lot of bumps and bruises along the way,” Shannon Stier said. “It wasn’t until just now, in 2016, that disabled student-athletes had a chance to take the field. Most student-athletes want to play in their high school, in front of their peers. They want to have all the accolades, awards and opportunities they would get in college if they succeed.”

Kendall will be doing her part by conducting a clinic at the Angel City Games. She’s going to share how she trains, prepares and explain her throwing technique. She is looking forward to sharing everything she has learned.

“When I go onto this chair or feel a lot of anxiety, I just think of all those kid’s that also want to do shot put,” Kendall said. “I throw for them because I know that even though it seems dicey now, at some point in the future it’s going to be better. … Everyone is going to make this into a bigger event in the future, I just know it.”