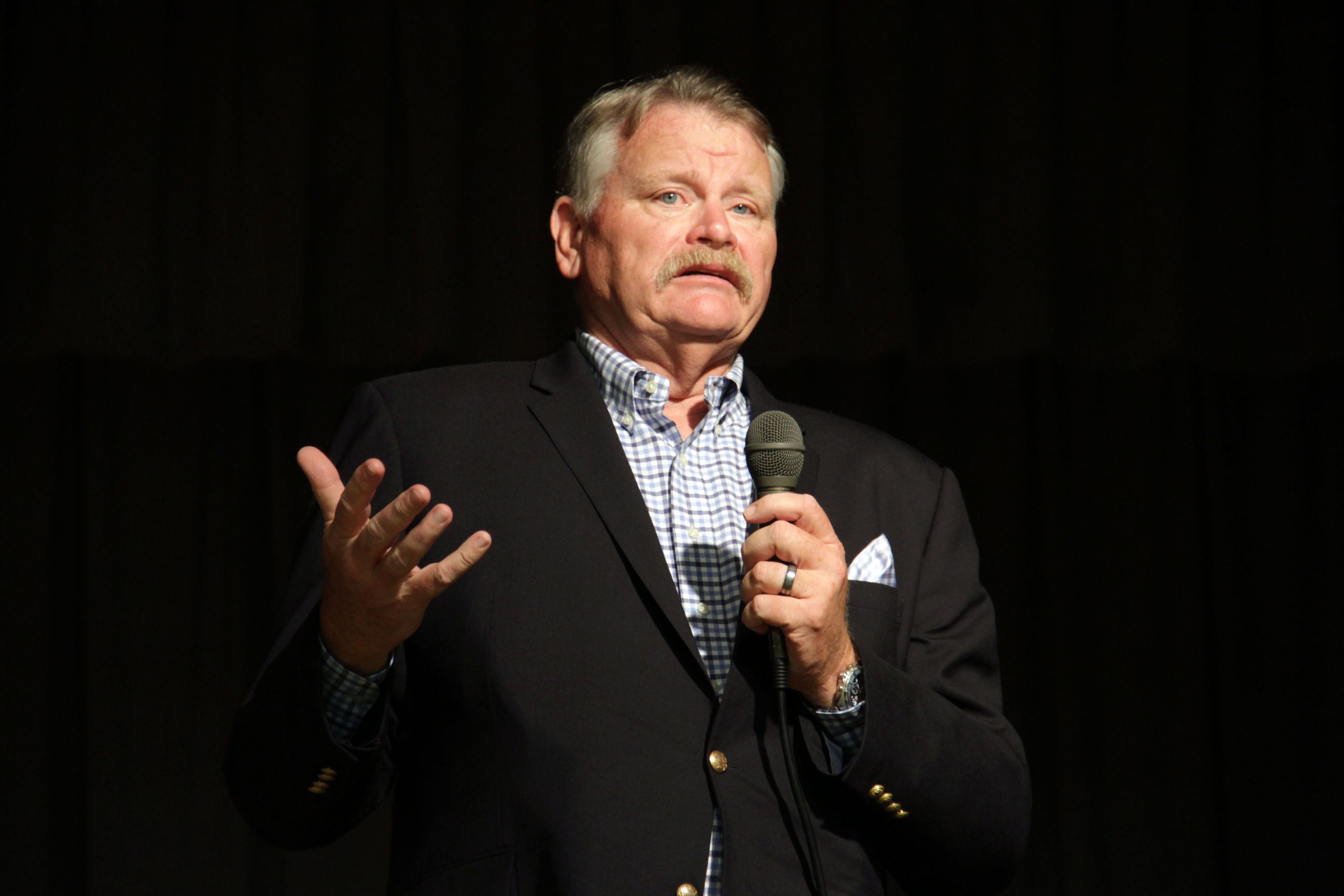 Special election candidate Gene James, one of the apparent frontrunners in the race for San Clemente’s vacant city council seat, is facing a litany of accusations from an ex-girlfriend who has circulated emails that call the candidate’s character into question.

In emails sent out to members of the community and the San Clemente Times, Diane Parker, who said she was briefly engaged to James in 2005, detailed several accounts that paint James as a reported tax delinquent who apparently ignored court summonses and allegedly made disparaging remarks to and about members of the LGBTQ community.

Speaking by phone with SC Times, James acknowledged having a relationship with Parker, but said he has “no idea what she’s talking about” in the emails and has “no recollection of threatening anyone.”

“I don’t recall anything of that nature,” he said when asked if he could explain his side of the accounts laid out in Parker’s email, the contents of which have been spread throughout social media and shared in blog posts by rightondaily.com.

According to Parker, the two met online through match.com back in 2003 and got engaged around 2005. It was around 2004, Parker claims, that she found out James’ former employer, AVI Food Systems, an Ohio-based food service company, had filed a suit against him in December 2003.

According to the complaint filed with Cuyahoga County Court in Ohio, AVI agreed to lend James $49,000 in September 2000. The court filing also states that James had agreed to repay the loan within 30 calendar days of his termination.

By August 2001, James had a remaining balance of $24,400 on the loan, according to the court document. Around that time, James and AVI amended the terms of the agreement, with James allowing his then-employer to garnish $100 from his “remaining payroll checks and through the 13 weeks of certain agreed-upon severance pay.”

Those deductions reduced James’ debt to $22,800. Afterward, the complaint stated, James was to make weekly payments of $100 until the loan was paid off.

James, the defendant, “did not make any of these weekly payments to AVI,” the court filing notes.

On April 21, 2004—after James had failed to appear in court—the Ohio judge handed down a judgement ordering James to pay $28,141 plus a 10% annual interest.

James said he wasn’t aware of AVI’s lawsuit, nor the judgement, until Parker’s emails were recently published in the blog post, as he said he was already living in San Diego at the time. He also said he didn’t have a comment on the topic other than to state that he has a lawyer looking into it.

“I had just learned about the case . . . when this blogger published it,” he said. “I looked into it, and I have a lawyer investigating at this time.”

As to why James asked his former employer for a loan, he stated, “It was a personal matter.”

When SC Times reached out to AVI to comment on the lawsuit and provide details as to why it sued James, the company said it didn’t have a record of the litigation in its files, because it was a 15-year-old case.

The Ohio court records show that the company filed a motion to revive the judgement in June 2010, because the judgement remained “unsatisfied” and “no execution on this judgement has been taken in the last five years.” The revival of judgement prompted a series of summonses to be mailed to James’ known addresses requiring that he appear in court.

“I have a lawyer looking into that,” James later said of the matter. “It’s an ongoing legal matter. Until I have advice from my lawyer, I’m not going to comment on that.”

In Parker’s email, she also referenced James’ tax debt with the IRS. A federal tax lien document she has shared from 2012 shows that James reportedly owed nearly $300,000 in unpaid taxes from 2002 through 2009.

“I’m not going to get into my personal taxes with you, but my taxes have been paid and have been fully for quite some time,” James said, responding to the SC Times’ question regarding the tax lien. He then explained that his tax debt accumulated after his divorce from his first wife.

“This was in the wake of a divorce; this was in the wake of taking care of my children. I had about $6,000 per month in child support and alimony, and about $5,000 per month in required court-ordered tuition to pay for my children,” he said. “And, yes, I got behind in my taxes, and my taxes have been paid. . . . My taxes have been paid in full—the interest, the penalties, paid in full.”

One of Parker’s most startling accusations is about an alleged incident that occurred in 2005, when she threw a party at her home that featured Dixie Longate, the stage name of an entertainer in drag who sells Tupperware.

According to Parker, James had arrived home during the party, and was visibly upset, slamming doors throughout the house, making guests, including Dixie, feel uncomfortable.

“Several women stayed behind until Gene appeared to settle down, and they were able to escort Dixie out safely,” Parker said in the email. “He later tracked down Dixie Longate, contacting him through emails and phone calls, threatening to physically harm and/or kill him.”

Dixie, who asked to be referred to as his stage name in order to speak candidly on the matter, corroborated the event, telling SC Times that although he didn’t recall James ever saying anything directly to him at the party, it was apparent that James’ alleged tirade was over Dixie’s presence.

“To my recollection, he didn’t say anything to me; it wasn’t until I got home to the emails,” Dixie said, later adding: “There was a definite sense that he didn’t want me there, and for safety, they wanted to get me out of there.”

James said he doesn’t remember such an incident occurring.

The emails James allegedly sent to Dixie, who provided copies of them to SC Times, show a bitter exchange between Dixie and a genejames@cox.net—an email address James denies ever owning.

The emails, which SC Times has been unable to confirm were written by James, include threatening and homophobic language directed at Dixie, calling him a “freak of nature,” as well as other derogatory names referring to the entertainer’s gender identity.

In the exchange, the genejames@cox.net account starts by blaming Dixie for being the cause of James and Parker breaking off their engagement. And it concludes with the emailer disparaging the LGBTQ community outright.

In defense of the charges Parker has made and publicized about him, James points out that he’s never been arrested, nor committed an illegal act.

“I have never been convicted of a crime,” he told SC Times. “This is nothing more than politics, and a personal matter being brought forth by someone that, at the very least, is very vindictive.”

The city council candidate also called out his accuser’s own character, pointing to her legal troubles back in the late 1990s, when her ex-husband, Richard Wayne Parker, a former agent with the Bureau of Narcotic Enforcement, was on trial for drug trafficking.

According to the Los Angeles Times’ extensive reporting, Richard Parker of San Clemente was sentenced in January 2000 to life in prison “for masterminding the biggest drug theft from a California police agency.”

During the highly publicized trial, it was revealed that Richard Parker had led a double life, keeping cash he had secretly accumulated from Diane Parker, as well as from a mistress in Newport Beach.

Upon learning of her then-husband’s mistress, Diane Parker, who at the time was a retired Orange County sheriff’s deputy, drove to the Bureau of Narcotic Enforcement office in Orange to confront the woman who allegedly had been having an affair with Richard Parker.

That confrontation, the LA Times reported, led to Diane Parker being charged with assault and battery. That charge, however, was later dropped.

Those legal issues, James told the SC Times, are what led to his breakup with Diane Parker.

“I ended our relationship, because I had concerns about that; she was arrested for assaulting a state employee on state property,” James said.

According to James, Parker has “harassed” him for the past 15 years by forwarding her allegations to previous employers.

As of press time, Parker had not responded to an SC Times request to comment on James’ accusations against her, nor on the legal matters involving her ex-husband.

James is one of five candidates currently seeking the open seat on the San Clemente City Council. The city’s special election, which is being held to fill the position left behind by the late Mayor Steve Swartz, will be decided on Nov. 5.