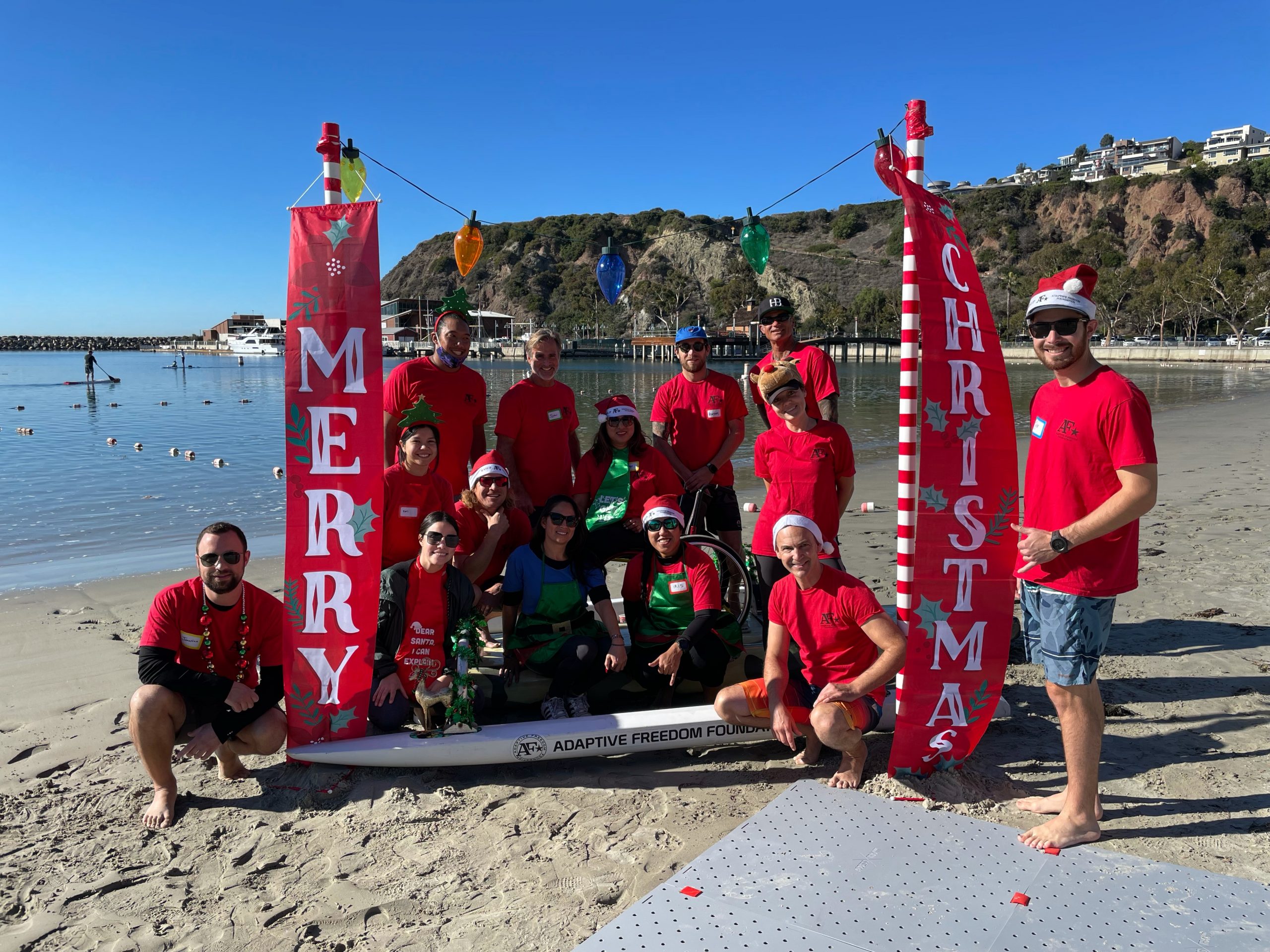 Featured Image: Adaptive Freedom volunteers dressed in Santa hats and helped people with disabilities get out onto the water on a WASUP board at Baby Beach on Dec. 18. Photo: Courtesy of Amy Lagera

The Adaptive Freedom Foundation celebrated its annual Santa Paddle on Dec. 18, when the nonprofit invited families to take pictures with Santa at Baby Beach, and took people with disabilities out on the water with wheelchair-accessible paddleboards.

Adaptive Freedom Foundation, whose tagline is “We put smiles on faces and open hearts,” offers people with disabilities the opportunity to participate in an often non-accessible activity, explained Amy Lagera, one of the foundation’s founders.

“You can really see that that is what happens,” Lagera said. “But it’s not only for our participants, it’s the people who volunteer. It’s the person who walks by and sees us on the beach. It’s for the family member that gets to do this with their family member that has a disability.”

Adaptive Freedom Foundation was founded in Hawaii in 2016 and later expanded to Southern California in 2017. The foundation operates from Dana Point to Marina del Rey and uses a Wheelchair Adapted Stand-Up Paddleboard, or WASUP, to bring people with disabilities out on the water.

According to the foundation’s website, a WASUP board “secures a wheelchair onto a paddleboard and allows people with disabilities, balance-challenged, and those needing assistance paddling, the opportunity to get out on the water and enjoy what was previously impossible; paddling a board from a wheelchair.”

Each board costs about $5,000 to make and are all custom-made.

“Eventually, our goal was to mass-produce them so there’s more access to people, but we’re still working on design elements of it,” Lagera said. “But equipment for somebody with a disability is so limited and so expensive. One of our things is we make sure that there’s never a charge for it. We work solely off of donations.”

For Jess Labbe of San Clemente, the Adaptive Freedom Foundation offers something her daughter Peyton Labbe can look forward to doing.

“It’s just really hard to find activities that she could do that other people can do, and opportunities to go do that,” Jess said.

“It’s such an opportunity that many people don’t have, and if we lived anywhere else, we wouldn’t have,” said Jess. “It’s just an opportunity for (Peyton) to do something typical … she gets to go paddleboarding, and that’s the thing she gets to share with other people and that we can talk about, share pictures with, that she’s super proud of and excited about.”

“For us, that’s important because everything is always variable, minute to minute, day to day in terms of what (Peyton) can tolerate or what kind of day she’s having—things like that,” Jess said.

At the first paddle event Peyton went to, Jess was worried that the board would flip with all the heavy equipment needed for Peyton’s wheelchair.

“My discomfort needed to take a backseat to her opportunity,” Jess said.

This is a common fear for parents of disabled kids. Minnie Hylton of Ladera Ranch echoed Jess’ fear from the first time her daughter, Emma Hylton, went out on the water on a WASUP board.

“I was nervous, of course, because my daughter was on peritoneal dialysis,” Minnie said. “And basically, it’s a port that’s in her stomach and cannot get wet, as far as like ocean water or pool water. I was super nervous, like, ‘What if she tips over? What if she falls in the water?’ But (Lagera) was like, ‘No, no, no, we’ll protect her.’ ”

Minnie added that one of the founders of Adaptive Freedom, Lance Takenaka, walked her through the design of the board and helped her feel safe putting Emma on the water.

But seeing Emma on the water and the joy that it gave her brought Minnie to tears. Emma loves the water, Minnie said.

“It was the most emotional day ever,” Minnie said. “Because just seeing her out there, even holding the paddle herself and with her limited abilities. She’s got cerebral palsy, so she’s had a really hard time paddling, but to her, she’s actually paddling while the others are paddling for her. She just thought she was just doing it on her own, and she just had a big old smile on her face.”

When TK Kimura, a world-class outrigger paddler and dragon boat paddler, was diagnosed with amyotrophic lateral sclerosis (ALS), one thing she missed more than anything was being able to get out on the water.

When Kimura’s husband, Mike Baker, found out about Adaptive Freedom’s paddle event happening just a half-mile away from him at Mother’s Beach in Long Beach, signups were full. But Lagera told Baker to bring his wife down to the beach and she’d make arrangements for Kimura to get out on the water.

“This is something that my wife had just been wanting to do for 18 months,” Baker said.

The foundation then organized a “Paddle with TK” event, in which roughly 200 to 250 people came out to paddle with Kimura.

“I can’t tell you the joy that they brought people who could never ever experience that,” Baker said through tears.

Lagera is “reaching out to people who have a love of water sports and who have been shunned from the water sports because of something that’s happened to them, whether it’s a car accident or a birth defect, or like in my wife’s case, ALS,” Baker said.

Adaptive Freedom Foundation has monthly paddle days between March and October, as well as its annual Santa Paddle in December.

The Santa Paddle event offered a way to take pictures with Santa in a calming environment.

“Somebody with sensitivities to sound or stimulation, going into the mall and taking a picture with Santa is too much, but being out in the open on the beach, that works,” Lagera said. “Especially once they get out and paddle, it just has this healing, calming effect on them.”

The foundation is growing quickly, Lagera said, and has begun to outgrow the capabilities of its small board. Adaptive Freedom Foundation will be starting a committee in early 2022 and is looking for community members with financial, engineering, marketing backgrounds—anything that relates to business, Lagera said.

“We’re reaching out to the community—people like me who are looking to do something to make a difference. We’re looking for those people to come join us and help us be bigger and better,” Lagera said. “So we can share and spread the awareness of what we do and make it more available to everybody out there.”

“If we can put a wheelchair on water, what else can we do?” Lagera said.

For more information about Adaptive Freedom Foundation, email the group at info@adaptivefreedomfoundation.org.