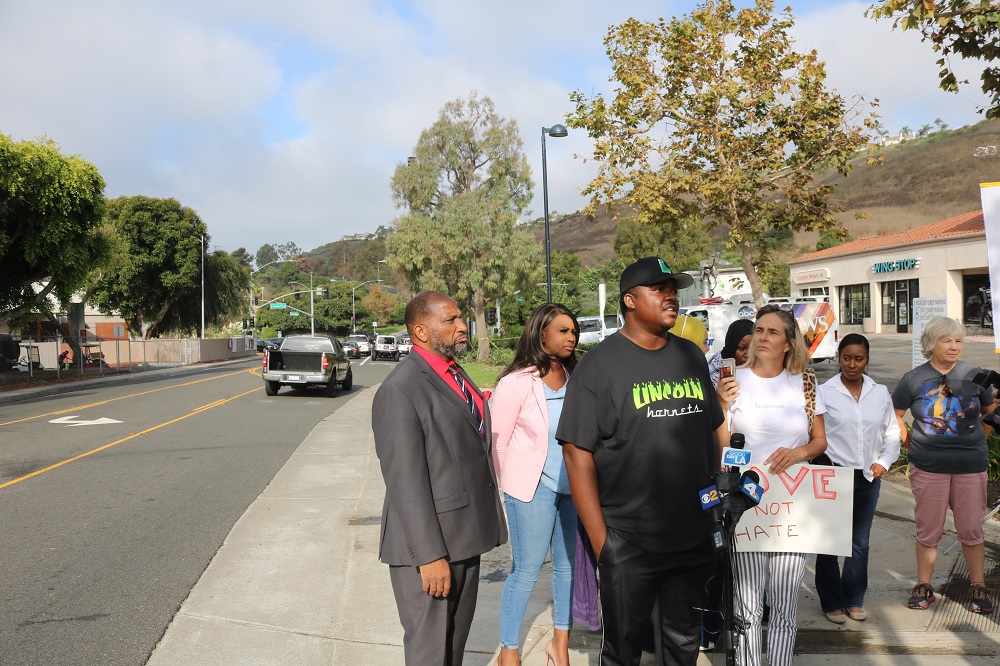 San Clemente and Lincoln High Schools have begun investigations following reports of racial slurs and comments made against Lincoln cheerleaders and fans at the football game on Friday, Sept. 13, at San Clemente High School.

An Instagram post by a Lincoln cheerleader that has since gone viral said that the cheer squad was called the n-word by kids and adults by the bathrooms at the San Clemente football stadium. A Facebook post by Sheronna Dangerfield, a Lincoln cheer coach, alleged the cheerleaders were told they “need a leash so they can be walked.”

The Lincoln cheerleader’s Instagram post from Saturday, which currently has more than 1,000 comments and nearly 900 likes and has been shared as a screenshot in various social media groups, was a screenshot of a text document.

Honestly, I still feel like garbage from yesterday, I know I shouldn’t take everything so personally, but they went from heckling all of us, to calling me out of my name directly to my face. I have never felt so bad about myself, but when you have multiple people yelling at you, that you don’t belong here, and all that type of stuff, you feel bad. #Lincolncertified #Lincoln @lincolnhornetsfootball #explore racism #sanclemente

“The blatant racism of there (sic) school community, that is the big deal,” the post read. “I was being heckled in the stands being called a (n-word). During half time I went to the restroom area, I got called a (n-word) to my face several times.”

The post continued with the cheerleader voicing her emotions from the night of and the next day.

“I still feel like garbage from yesterday,” the caption of the Instagram post said. “I have never felt so bad about myself, but when you have multiple people yelling at you, that you don’t belong here and that type of stuff, you feel bad.”

San Clemente Times reached out to the Instagram user who posted the original allegations for comment and have not received a response at this time.

Both San Clemente football coach Jaime Ortiz and Lincoln coach David Dunn said there were no issues between the teams on the field during the game on Friday night, when San Clemente beat Lincoln, 29-0.

In a letter sent to Lincoln High School and the San Clemente community on Sunday, SCHS principal Chris Carter said the school is “conducting a thorough investigation on these accusations with our Orange County Sheriff’s Department, administration, staff, and others who were present supervising the game.”

“We do not condone racist speech or actions at our school, and we unreservedly condemn hateful rhetoric that targets any person or group,” Carter said in the letter. “We take these claims very seriously.”

The Capistrano Unified School District is also involved with the San Clemente investigation.

“We are working shoulder-to-shoulder with the high school at this point,” CUSD spokesperson Ryan Burris said. “They are reviewing eight hours of footage from the football game, and combing through social media for posts from students to interview them and get more information on what occurred.”

Burris said more will be known by Wednesday or Thursday.

“Our administration team is continuing to investigate the incident, and we are taking this very seriously,” Brown said in the letter. “Early information also seems to show our students responded with the maturity and restraint we would expect. They reported it to school leaders, and together we are taking action.”

On Monday, Sept. 16, representatives from Generation Justice, a youth-led activism group, a Lincoln football coach, a member from the NAACP San Diego chapter and other activists held a press conference across the street from San Clemente High School.

“I am hurt by what happened on Friday night,” Aeiramique Glass-Blake, executive director of Generation Justice said. “I’m hurt that the cheerleaders felt so unsafe that they left the game early. We are hurt that when we teach our young people healthy competitive-ism, things like this happen in a predominantly white community, in a predominantly white school when no one came to be divisive, no one came to have unhealthy competition, no one came to be greeted with the hate and the rhetoric they were greeted with.”

Glass-Blake said she would like to see the school put an action plan together.

“It is very, very important that we teach our kids love not hate, that we teach them education around racial injustice, racial inequality, racial bias and we take the lead and not continue to allow our children, no matter our divisiveness, not allow this continue into our schools and with our children and in our communities.”

Mirroring a Sunday statement from the NAACP San Diego chapter, Glass-Blake also alleged that sheriffs and security at the game did not protect the Lincoln contingent.

“The fact that sheriffs were asked to intervene,” Glass-Blake said, “They were only on the Lincoln side, the majority of the sheriffs and security were on the Lincoln side, but Lincoln was not protected by them. When they asked to make sure that students would not continue to come over to the visitors side to harass the visitors, they made it seem like they were stopping the children and the students and the parents, but they did not stop them and they continued.”

The Orange County Sheriff’s Department denied this in a statement on Monday.

“Claims that OCSD deputies did not respond for request for assistance related to this incident are inaccurate and misleading,” the statement read. “At the game, an individual told deputies that San Clemente middle school students were on the visitor side and being ‘rowdy and obnoxious.’ Deputies removed the students from the area. There was no mention of any inappropriate language or hate speech. Later in the game, an individual reported to deputies that a student had used inappropriate language, but was not specific in what language was used and could not identify the people using the inappropriate language to the deputies. No further action was taken.”

There were six OCSD officers working at Friday’s game, which is the total “consistent with other high school football games,” according to the statement.

Glass-Blake said she did not have any further hard evidence of the event, such as video or audio recordings, but she believed the stories from those involved.

“Everybody was in the heat of everything. No one took videos,” Glass-Blake said. “I think when I’m talking to the young folks that were really part of this, they were really in a shock and disbelief. It was the cheerleaders and the majorette team, the dance team going to the concessions and the bathrooms and back and forth. No one got video tape. They sent me all that they had that was their statements and how they were feeling and what they wrote when they were on the bus and the next day.”

At the press conference, Daniel Smith, a varsity coach at Lincoln high school, reinforced what was said by the head coaches of both football programs.

“It was a clean game,” Smith said. “Nothing went on on the field. Both teams actually said thank you at the end, there was nothing going on on the field like it was a little crazy on the sidelines. Just so you know, San Clemente’s football team and their coaches, they run a classy program, so we don’t have to worry about that side.”

Smith also mentioned another incident between a security guard on Lincoln’s side of the field and a Lincoln parent.

“Actually got to see one of the security guards speak ill of one of our players, Keyshawn Smith (no relation),” Smith said, “as we were walking away to go to our bus. The problem was the security guard was actually talking to (Keyshawn Smith’s) mom. (Keyshawn Smith) did what he needed to do and backed his mom up. Even a student came in and started speaking and we told him to walk away. Like I said, some of the staff that was over there they actually escorted the kid away so we could get back to our bus safely. We didn’t want any trouble.”

OCSD said in its statement that it escorted Lincoln to their buses, “as is customary after every game, without incident.”

“One of the experiences she shared was that it was youth and adults that came up to them and were harassing them,” Bowser said, “and they were mocking them and saying things like ‘don’t beat us up, don’t beat us up.’ And told them they are dogs and need to be on leashes.”

In response to Carter’s letter from San Clemente, Glass-Blake thought the statement did not go far enough.

Here is the letter in full that Carter sent to the Lincoln High School and San Clemente communities:

We are deeply concerned by the allegation that racist and offensive comments were directed towards students and fans of Lincoln High School at the football game this past Friday night.  As the Principal of San Clemente High School, I work with my faculty, staff, students, families, and community to maintain the highest standards of respect for all individuals. We do not condone racist speech or actions at our school, and we unreservedly condemn hateful rhetoric that targets any person or group.

We are conducting a thorough investigation on these accusations with our Orange County Sheriff’s Department, administration, staff, and others who were present supervising the game. We take these claims very seriously. We ask the communities of San Clemente and Lincoln High School to please share any evidence that would assist us with the investigation. Please send any evidence or statements directly to Assistant Principal, Cameron Lovett, at cnlovett@capousd.org.

Regardless of the outcome of the investigation, we will use this opportunity to take specific action with our school community to ensure that our words and actions meet our high standards and that every single person on our campus as a student, family member or guest feels safe and welcome. We look forward to working with both school communities to ensure a positive resolution.

Here is the letter in full that Brown posted to the Lincoln High School Facebook page:

I’m saddened to share with you reports of racism directed against our students at the football game in San Clemente on Friday night. At least several of our students were met with racial slurs by the fans of the other team. Our administration team is countinuing to investigate the incident, and we are taking this very seriously.

Early information also seems to show our students responded with the maturity and restraint we would expect. They reported it to school leaders, and together we are taking action.

On Monday, Vice Principal Eric Brown will be interviewing all students involved to document the incident. If you have any relevant information to share with him, his email is ebrown3@sandi.net.

In the meantime, I have already spoken with Superintendent Marten, who has offered Lincoln her full support for our school and our students.

I am sorry to have to share such difficult news with you so early in the school year. We expect our students and staff to stand up against racism and hatred when they see it, and it’s up to us responsible adults in the community to do the same.

Thank you for your time. I hope you and your family have a peaceful weekend.