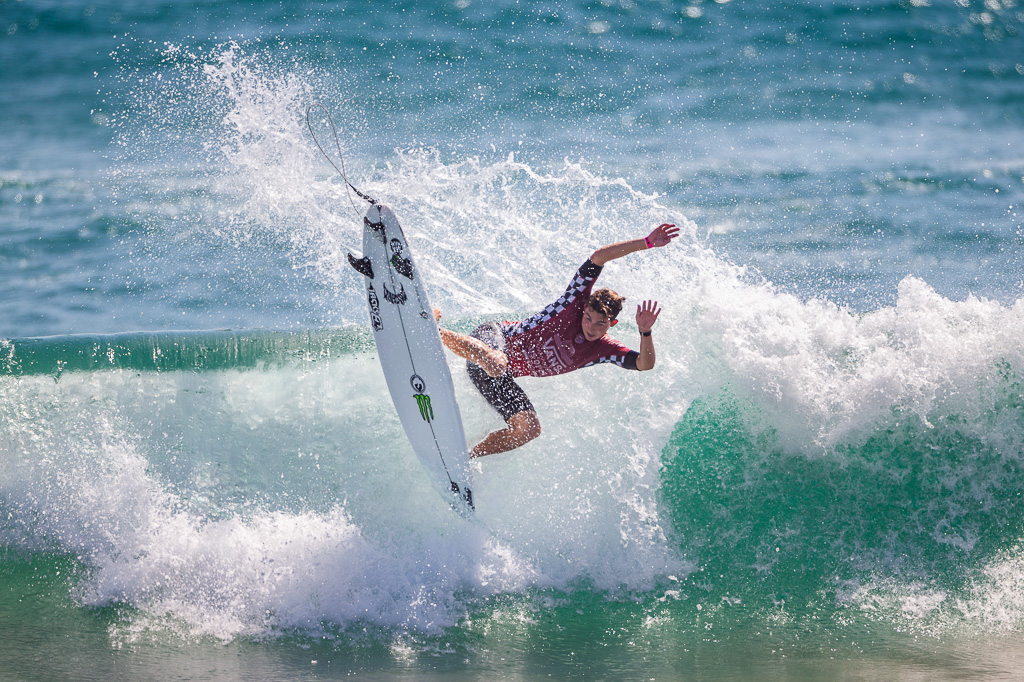 Almost Epic: Griffin Colapinto Gets Second at the Vans U.S. Open of Surfing

Whoever says second place is the first loser is full of it. San Clemente’s Griffin Colapinto just finished runner-up at the 2018 Vans U.S. Open of Surfing in Huntington Beach, and while a win would have been epic—and made him the first San Clemente surfer since Shane Beschen in 1994 to win the Open—Colapinto’s performances from Round 1 all the way through the final was one for the ages.

Facing Huntington Beach’s Kanoa Igarashi (who was representing Japan) in the final, Colapinto got out to an early lead and controlled a good portion of the heat. As time ticked down in the dying minutes of the heat, the two went blow-for-blow, trading waves and scores. In the end, a gritty eight-point ride by Igarashi was enough to put him over the top. The feat was all the more impressive considering it was his second consecutive Open title.

“Last year, I won this event for my family and friends who have supported me so much, but this year it belongs to the city of Huntington Beach for all their support and just firing me up so much,” said Igarashi from the winner’s stand.

For Colapinto, it was a bittersweet moment. After beating lifelong friend Kolohe Andino in the quarterfinals earlier in the day, he was clicked into the zone and fired up to take the win. In the semis and finals, his brother Crosby, Andino and a whole crew of San Clemente surfers vocally cheered him on in the VIP area, screaming their heads off any time Colapinto stood up on a wave.

“I’ve never won a QS event, so that’s a hard one to swallow, but it still leaves me with a bunch of fire, so I’m really excited to just keep working hard,” Colapinto said after the finals. “My favorite moment of this event was in that final. I think that’s one of the best back-to-back exchanges I’ve ever had in a heat, so that’s all I really care about. I’ll just decompress for a few days. I feel like my strategy and my surfing was there throughout the whole event. At the end, it just came down to the waves. We both didn’t fall, and I just have to keep putting myself out there and I’ll have to stay ready for when that time comes.”

The conditions for the final day of the Open were surprisingly switched on. A new southern hemisphere swell moved in on Sunday, bringing the surf into the three- to four-foot range, which was much appreciated by all the competitors as they’d tried to make the most out of minimal swell all week.

On the women’s side of the draw, Santa Ana’s Courtney Conlogue took the win over current world No. 1 surfer Stephanie Gilmore in the final. After suffering through an injury earlier in the year, this was the first contest in which Conlogue was performing at 100 percent.

“It’s not been the easiest road to recovery, but I fought through it all, and now I’m standing here on top of the podium. It’s unbelievable,” Conlogue said. “I just have so many amazing people supporting me right now and I’m loving everything. I’m loving surfing and that’s so refreshing. But to share such an amazing final with Steph was incredible, and I’ve just been in awe of her surfing this week. I love performing for my home crowd. There’s nothing like having my family and friends here supporting me. It’s so much fun and such a challenge just with the expectation of wanting to perform, it’s been an amazing journey this week.”

Sixteen-year-old San Clemente transplant Caroline Marks, who grew up in Florida, charged all the way through to the semifinals, but Conlogue proved to be too much for her. Had she been able to knock off the local favorite and made the final, San Clemente would have had a very real chance at winning both the men’s and women’s divisions—instead that honor went to Huntington Beach this year.

All told, it was a great U.S. Open for our local talent, even if they didn’t come away with a win. Colapinto, Marks, Andino, Pat and Tanner Gudauskas, Kei Kobayashi, Kirra Pinkerton, Cole Houshmand, they should all hold their heads up high after the week they just had, and if you see them in the lineup, give them a wave, they deserve it.

Bodyboarding Gets Its Due

Grom of the Week: Koa Morehead