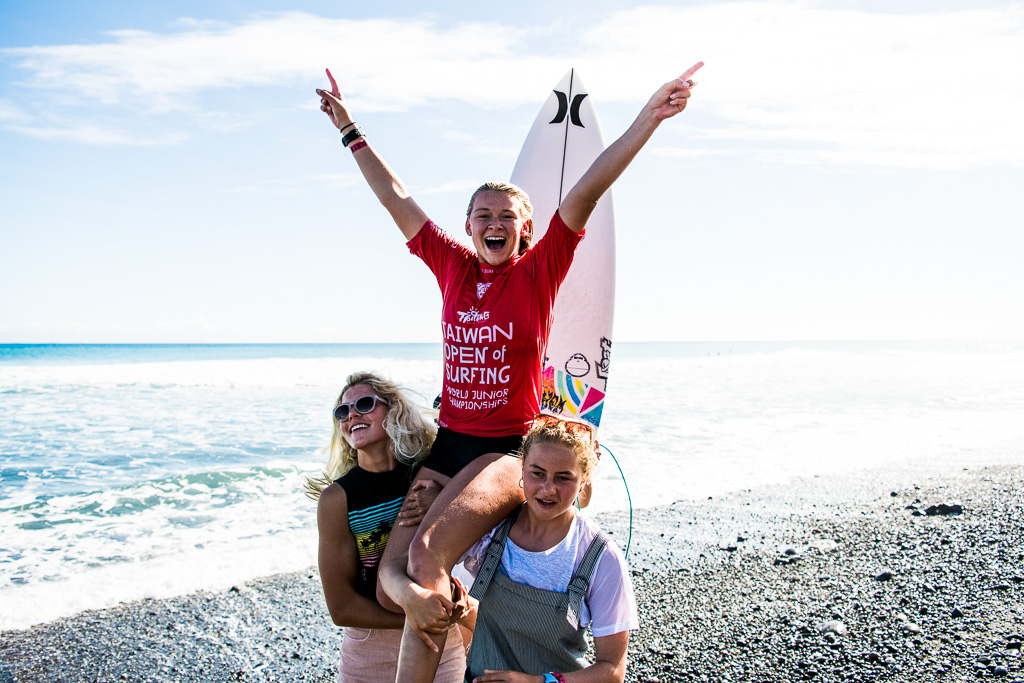 It’s been a breakout year for 16-year-old San Clemente surfer Kirra Pinkerton, who just capped off her dream run by winning the WSL Junior World Championship. It’s the first time a surfer representing the United States has won the title.

“This hasn’t really sunk in yet, so I don’t even know if this is real,” said an elated Pinkerton after her big win.

Contested at Jinzun Harbor in Taiwan, the Taiwan Open World Junior Championships was an international affair. Featuring the best surfers under the age of 18 from around the world, it’s an all-out battle to determine the future stars of the sport.

In the final, Pinkerton faced off against Hawaii’s Keala Tomoda-Bannert (in surfing, Hawaii is recognized as its own nation out of respect for the origins of the sport). Held in fun 2- to 4-foot surf, the 35-minute final was hardly a cakewalk for Pinkerton. With less than two minutes left on the clock, she found herself trailing in second place needing a big score to take the lead. She dug deep and made some magic.

“My goal when I came to this event was to win it, so I’m pretty proud that I got here. It’s been a really intense day today as there were so many close heats. I didn’t think I’d make it,” Pinkerton said. “I’ve had such an amazing time here in Taiwan; it’s a beautiful coastline, and the waves have been so fun, really similar to my home around San Clemente, so it really suited me.”

It’s been an incredible year for Pinkerton. She won two WSL North America Junior Qualifying Series contests over the course of the season, which propelled her to the North American title and secured her spot in the world championship. Her win at Jinzun Harbor is by far the biggest moment of her rapidly accelerating career.

“This has been an amazing year with some good results and plenty of experiences on the JQS and QS around the world. This is definitely the highlight of my career. To be a WSL World Champion feels amazing,” Pinkerton said.

In the semifinals, Pinkerton faced off against good friend and fellow San Clemente ripper Samantha Sibley. Between the two of them, the future of women’s surfing is shining very brightly at the southern end of Orange County. Sibley also finished second to Pinkerton in the year-end North America Junior Qualifying Series ratings and had a win of her own at the RVCA Pro Junior earlier in the season.

On the men’s side of the Taiwan Open World Junior Championships, both Crosby Colapinto and Cole Houshmand looked solid in the early rounds of the contest but found themselves edged out in Round 3. American Eithan Osborne from Ventura finished second in the contest behind eventual champ Mateus Herdy from Brazil.

The only thing left on the WSL’s competitive calendar for 2018 is the Pipeline Masters on the North Shore of Oahu. San Clemente locals Griffin Colapinto, Kolohe Andino and Patrick Gudauskas will all be surfing in the contest, which stands as one of the most venerated and distinguished events in the history of the sport.