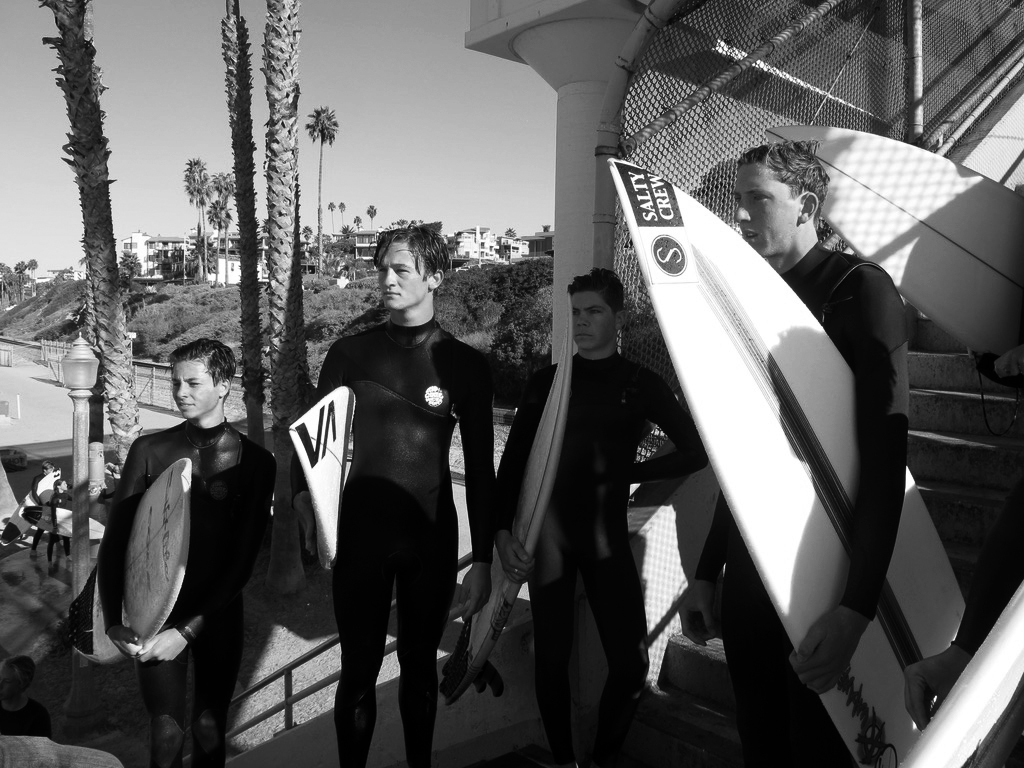 It was 7:30 in the morning, and there were a couple dozen teenagers swarming the only peak at T Street. The surf was an inconsistent 1-to-3 feet. The conditions were glassy. Given how small it was, it actually looked pretty fun.

Among the kids was former World Tour-competitor-turned-San Clemente-family-man Neco Padaratz. A father with two kids at Concordia Elementary School, he still rips. Earlier in the week, with a little more wave energy in the water, Matt Archbold was testing the T. He’s got a similar story as Neco, but it’s just more intertwined in local lore.

In the water, one kid flawlessly cross-stepped his way across an inside runner on his longboard. Out the back, another kid found a fun-sized set wave and arced into a mature, powerful forehand carve. It was a typical dawn-patrol surf practice for the San Clemente High School surf team, as Kai McPhillips got out of the water with an old Mach 7-7 Morey Boogie bodyboard.

“I grabbed this from my dad… I think I had more fun than anyone out there,” he said as he laughed, his hair still dyed blue from Halloween. Kai’s father is world champion longboarder Colin McPhillips. The family has grown up in the local waters.

It was another strong year for the Triton wave-riders. Going undefeated during the regular season with a 7-0 record, this week they’ll look to keep the dream alive at Upper Trestles for the individual league championship. There’s a southwest pulse forecast for the contest, and it looks as if the Santa Ana conditions may persist.

“It was another amazing year; we’ve got a really great group of kids and they’ve all pulled together to go undefeated,” said Coach John Dowell, watching from stairs at T Street.

With a 5-month-old of his own at home, it’s been a busy season for Dowell and his tight-knit crew of surfers. He said he’s proud of his team’s ability to win, but he’s also proud of the good people they’re growing up to be both in and out of the water.

“You have to keep it all in perspective; it can’t just be about the surfing,” Dowell said.

Midway through practice, seniors Ethan Mudge and Reef Tsutsui trotted down the stairs. They gave their coach a hearty good morning and checked the surf. Mudge has made a name for himself this season, carrying the team by riding both this shortboard and his longboard in competition.

“At the beginning of the year, I told him to focus on one or the other, and he started out on the shortboard. But then he asked if he could do the longboarding, too, so we tried it out and he’s been incredibly successful,” said Dowell.

“I prefer short boarding, but longboard is always a good alternative. It’s good to mix it up,” Mudge said when asked what type of craft he would rather ride.

In terms of how this class of Triton surfers sees themselves in the grand scheme of things, they’re humble, appreciative and quick to credit those that have come before them.

“There have been so many good guys that have come through this program, I feel like we’re carrying on the legacy,” Tsutsui said.

The Triton surf team has been so successful over the years and not just because San Clemente is home to Lower Trestles and the kids grow up with a great wave in their backyard.  Nor is it because guys such as Neco and Archy and the Gudauskas boys are ripping role models—or because Coach Dowell is arguably the best surf coach in the country. They’re successful because of all those things.

The winning ways of the San Clemente High surf team also benefit from a community effort. After practice, as one of the kids walked up the beach, Coach Dowell pointed to his leash. Local company XM Surf More made the entire team custom red-and-black Triton leashes, and 10 percent of the sales go back to the surf team.

“How cool is that? Our own leashes! It’s so rad to have that kind of support and have people believe in the kids and the program like that,” Dowell said. “It means a lot.”