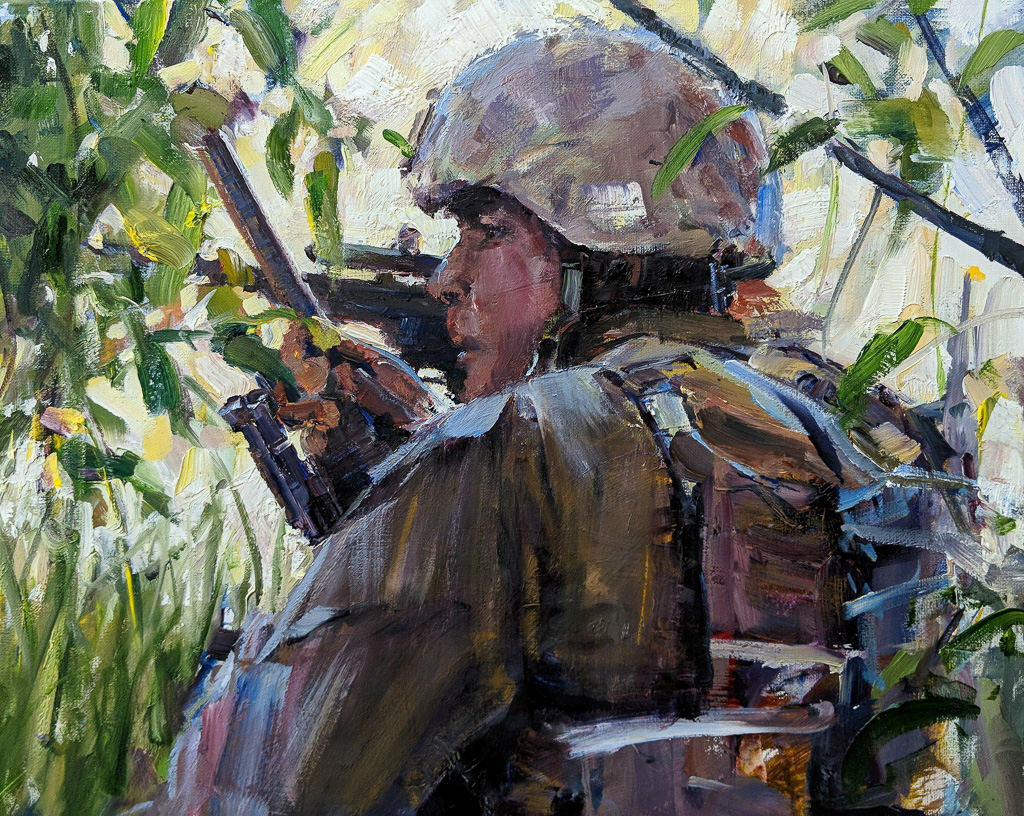 By Evan Gerdisch, For the San Clemente Times

Each person is composed of many identities, some distinct and some overlapping, but all shaped by perspective and experience. The same hands that fire a weapon during combat may also create art or nurture a child.

The hands of Ryan Jensen, former sniper in the Marine Corps and current artist and father of two, know all three. I set out to learn about his experiences as an artist and as a Marine, but when I contacted him for an interview, I was first introduced to Ryan the father.

About a minute into our phone interview, which began while Ryan drove his kids home, Ryan paused, listening to another voice.

“My son is yelling at me from the back seat (of the car),” Jensen said. After a short but unsuccessful negotiation, he said, “Sorry, I’m going to have to call you back—my son is just going crazy.”

No problem. I was not on a tight schedule, and I appreciated that Ryan the Marine and Ryan the artist must temporarily take a back seat to Ryan the parent.

He called me back, and I set out to understand facets of Ryan’s personality. Growing up in San Jose, Ryan was surrounded by art. His father, Dave Jensen, was an illustrator and his mother, Molly, a graphic designer. From the time he could hold a pencil, he was drawing.

“I drew a lot growing up,” Jensen said. “I always had a sketchbook with me, and I always liked drawing fast.”

When I asked him what his father taught him about art, Ryan paused for a moment, gathering his thoughts.

“He taught me how to look and observe. Painting is one thing—being able to see and observe something and translate it into art is another,” he said.

Certainly, Jensen’s observational skills served him well in the Marine Corps in which he served two tours in Afghanistan and one in Iraq as a sniper, pursuing photography whenever time permitted.

Soldiers on a mission are a frequent theme in Ryan Jensen’s photography. Jensen was part of the San Clemente Art Association’s Military Art Program and he will return to participate in this year’s Paint San Clemente, which takes place June 23 to July 1. Photo: Courtesy of Ryan Jensen

Soldiers on a mission are a frequent theme in Ryan Jensen’s photography. Jensen was part of the San Clemente Art Association’s Military Art Program and he will return to participate in this year’s Paint San Clemente, which takes place June 23 to July 1. Photo: Courtesy of Ryan Jensen

A sketch artist, a photographer and a Marine—all these identities are consolidated in Jensen’s art. His impressionistic style conveys the urgency of a sketch artist; his eye for composition evidences his experience as a photographer; and his scenes and subjects, sometimes based on his own war-time photographs, reveal a Marine.

Ryan’s relationship with painting is inextricably linked to his service in the Marines, as he first started painting while stationed at Camp Pendleton. Inspired by the spare beauty of the coastal-desert environment that encompasses Pendleton, Ryan developed an immediate passion for painting en plein air.

In 2013, he joined the San Clemente Art Association’s Military Artist Program (MAP), painting whenever his schedule would permit. That same year, he participated in Paint San Clemente, a week-long plein air festival. Although he did not win any awards for his entry of the cluttered, colorful lot of abandoned appliances behind Nic’s Vacuums & Small Appliances, he did make his first sale—to the owner of Nic’s Vacuums. His offbeat entry also characterizes his penchant for finding beauty in the everyday.

“When I see it, I’ll know,” Jensen said, describing his choice of subjects. “Something just has to grab me—a good balance between warm and cool, good atmosphere, lighting.”

Jensen’s art is not only a culmination of his professional and personal experiences, it is also a way for him to process them. Like the more than 100,000 veterans, Jensen fights an ongoing battle with post-traumatic stress disorder (PTSD).

“It can be hard to sleep,” Jensen said of life after three tours of combat duty. “You have issues from combat that are unresolved.”

For Jensen, art is much more than a career.

“When I’m in my right brain and creating art and connecting with nature, it helps so much,” he said. “It’s my therapy.”

Of course, there is no panacea for something as complex and personal as PTSD, but art can provide some measure of relief to those suffering from the invisible scars of war. When asked if he has any messages for those considering art as a hobby, therapy, or both, Jensen responded, “Paint like your life depends on it. Paint with authority, because it’s always interesting to see what comes from that.”

Although he now lives in Blue Lake, a small town about 10 minutes east of Humboldt State University, his painting career will come full circle this summer as he returns to South Orange County to participate in Paint San Clemente. From June 23-30, see Ryan, along with local and other visiting artists, paint the town as this week-long plein air event celebrates its 17th year.

Evan Gerdisch is an editor and freelance writer based out of San Diego, who specializes in education and financial literacy. He has been volunteering with the San Clemente Art Association’s publicity division since April 2018.