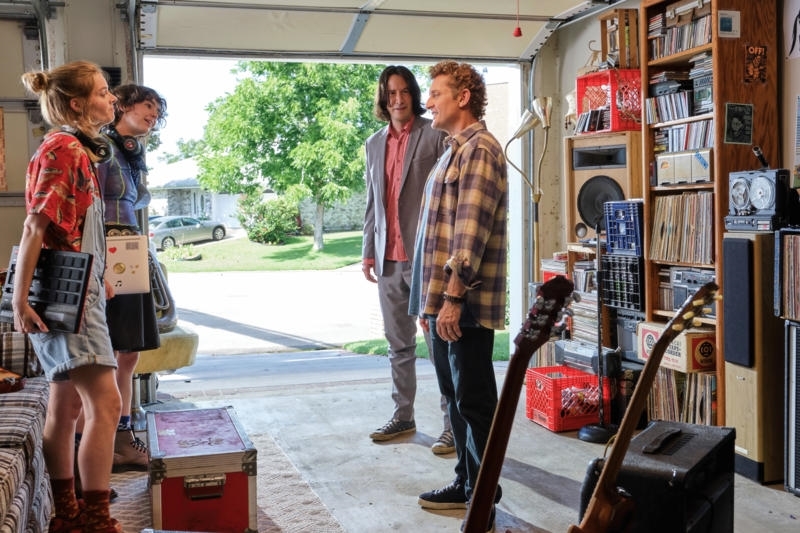 At the Movies: ‘Bill & Ted Face the Music’

For the past three decades, the famous movie characters known simply as “Bill and Ted” have endeared audiences with original and even newer fans of their sci-fi comedies. When a sequel was greenlit only two years after Stephen Herek’s Bill & Ted’s Excellent Adventure (1989), the follow-up could have very easily gone the way of most sequels to popular goofy comedies—that is, not good and incredibly unfunny. But instead of being redundant or lazy, Pete Hewitt’s Bill & Ted’s Bogus Journey (1991) went the opposite direction. Now, nearly 30 years later and a decade in the making, a third installment is upon us in the form of Dean Parisot’s Bill & Ted Face the Music.

After their first two adventures, Bill Preston (Alex Winter) and Ted Logan (Keanu Reeves) are now middle-aged, out of work and each on the verge of divorce. Right when the lifelong BFFs are at a loss as what to do, Kelly (Kristen Schaal), the daughter of their former time-travel mentor Rufus (previously played by George Carlin), randomly pops up to inform Bill and Ted that they need to save the universe by composing the greatest song ever written.

So now, 29 years after Bogus Journey was released, how does Face the Music compare to its previous sequels? Well, I think it might depend on the viewer. As someone who was never a big Bill & Ted buff growing up, I was just fine with Face the Music.

Face the Music had all the same themes, atmosphere, characteristics and spirit of the originals, making it a rare instance in which a sequel produced more than a decade later wasn’t along the lines of Zoolander 2 (2016). Bill & Ted’s latest odyssey will be most appreciated by the series’ fans and probably some casual viewers, too. The new epic romp isn’t exactly mind-blowing or brilliant, but it’s amusing enough to end the driest summer movie season in history.