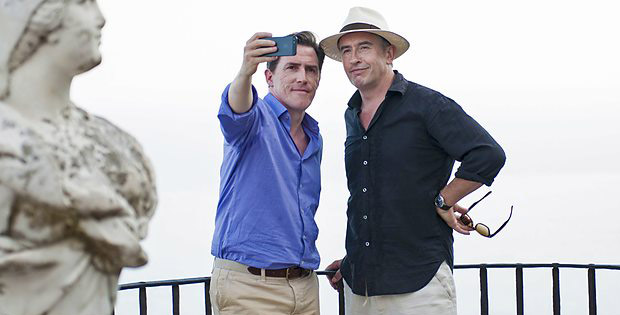 At the Movies: Italy, as Viewed on Screen

With the unprecedented circumstance of the whole world slowly shutting down as tragedy looms over the major regions of Asia, Europe and the U.S., our perception is changing slightly as well. How we view art from these specific locations is currently a bit bittersweet, especially with how bleak the past month has been for Italy. On social media, I’ve noticed a minor resurgence in old Hollywood films like David Lean’s Summertime (1955) and William Wyler’s Roman Holiday (1953).The films are set in two of the country’s most popular cities, Venice and Rome, with a romantic, whimsical atmosphere that makes you wish you were having adventurous vacations there. Obviously a trip to anywhere in Europe would not be ideal or appropriate right now, but maybe this kind of escapism through film could help ease the pain, so to speak.

At home last weekend, I revisited one of my favorite Italy-set films, Michael Winterbottom’s The Trip to Italy (2014). The second in the Trip series starring comedic actors Steve Coogan and Rob Brydon as fictionalized depictions of themselves, Italy has been my favorite of the duo’s episodic, scenic adventures, as I think it has the best jokes and moments. All three comedies are very entertaining and clever, partly because Winterbottom, Coogan and Brydon make use of the locations to have some fun. But it’s also clear that the filmmakers have genuine appreciation for  the country’s history and geography.

Trip to Italy primarily holds up and is still very funny, though now, with everything going on, watching it does leave a somber tone. When the Sept. 11 attacks occurred, a lot of movies filmed in New York City went through a brief period of being somewhat taboo. Similarly, we could see a period of new sensitivity to other geographical regions for a while.