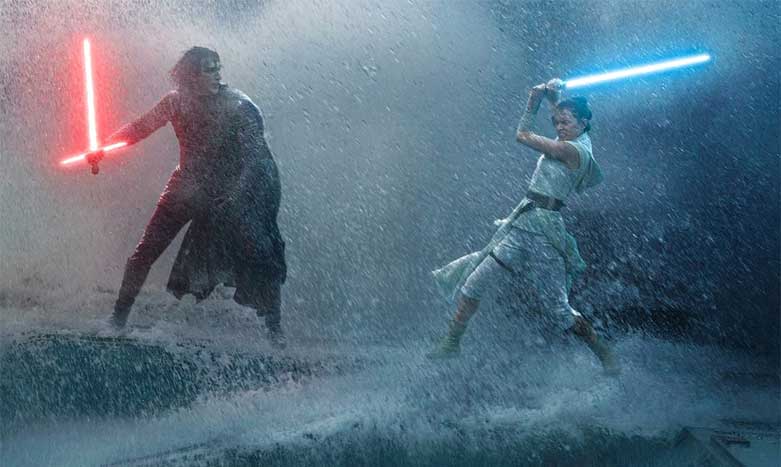 At the Movies: ‘Star Wars: The Rise of Skywalker’ Doesn’t Rise Very High

I’m going to throw a bone to J.J. Abrams’ The Rise of Skywalker. Because while it is very flawed and hokey, it also was the first time this decade that I thought the new additions to the Star Wars brand actually “felt” like the tone of the original classics. In fact, the less you know or care about Star Wars, the more likely you are to enjoy the final installment of the current trilogy. Abrams seemingly chose to film this new movie almost as a one-off, with viewers not needing to remember much of the events in the previous two efforts.

Rey (Daisy Ridley) is still training to be a Jedi, discovering her family background and trying to figure out Kylo Ren’s (Adam Driver) end goal. Kylo is still villainous, and particularly motivated by his own fascination with Rey. Finn (John Boyega), Poe (Oscar Isaac) and Rose (Kelly Marie Tran) are still leading the war against the First Order; and the First Order is being led by Ren, General Hux (Domhnall Gleeson) and General Pryde (Richard E. Grant).

While The Rise of Skywalker hits all the cues for a decent blockbuster, its plot is very dull and borderline boring. It’s sad that with all the potential, all the quality world building from 1977-83, that no one knows what to do with this universe outside of the Skywalker family. We do finally get the new, main trio collaborating and working as a team, but it’s hard to appreciate their chemistry. To me, this revamped cultural phenomenon doesn’t end on a high note, or a low one—but, rather, on a fully resounding “meh.”