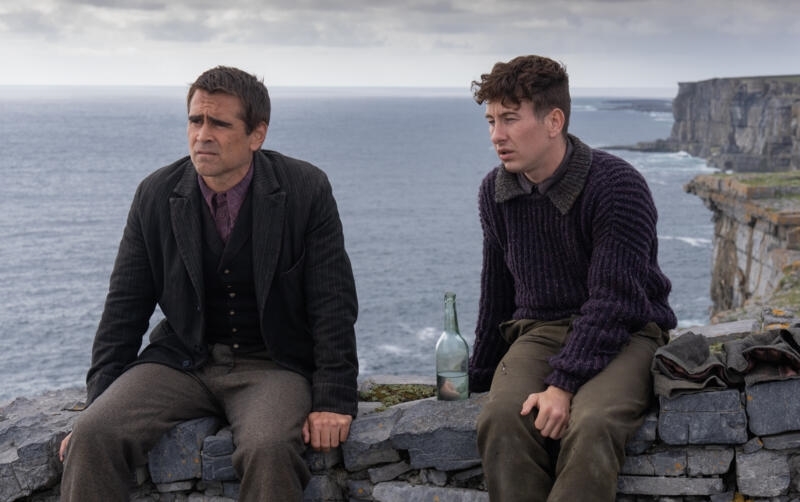 Two decades ago, Hollywood tried to make Irish actor Colin Farrell into the next big movie star, a la Tom Cruise or Brad Pitt. But now, it turns out, he is much more interesting as a character actor than traditional leading man.

Farrell’s latest feature and third collaboration with writer-director Martin McDonagh is The Banshees of Inisherin, co-starring Brendan Gleeson, who also worked with Farrell and McDonagh on the cult classic In Bruges (2008).

The trailer for Banshees would make you think the period piece is just as hilarious as the trio’s previous hit, but in actuality, it’s pretty grounded in comparison.

Set on an Irish island called Inisherin during the Irish Civil War, Pádraic Súilleabháin (Farrell) lives a simple life with his sister, Siobhán (Kerry Condon), where they tend to their farm animals. Both are content to live their lives ordinarily, until one day, Pádraic’s world comes to a halt.

His closest friend, Colm Doherty (Gleeson), suddenly wants nothing to do with him for some inexplicit reason. While determined to figure out what he’s done to offend Colm, Pádraic is also dodging local nuisances: youthful Dominic Kearney (Barry Keoghan) and elderly Mrs. McCormick (Sheila Flitton).

The first 40 minutes or so of The Banshees of Inisherin are incredibly Irish and seemingly much ado about nothing at all. This lines up perfectly with McDonagh’s usual sense of humor of mixing irrelevant behavior with serious subjects. But the last half-hour takes a rather dark turn regarding Gleeson’s and Keoghan’s characters, which is also on brand for the filmmaker.

Farrell proves yet again that he stands out the most in modest, small-budget dramedies, compared to action-packed blockbusters. Gleeson and Keoghan are great, as usual, in Banshees, and it’s nice to see Farrell back home in Ireland.

But I was most drawn in the cast to Condon, whom I wasn’t familiar with before viewing the film, and am interested in seeing more of her acting.

Though there is a lot to admire about Banshees of Inisherin, my one problem throughout the movie is I just don’t get why Pádraic is friends with Colm in the first place. We get the sense Pádraic is an average man with no specific interests or complaints, so his standards aren’t particularly high. But why would he want to be best friends with such an unpleasant snob is a bit perplexing.

If you’re a fan of Farrell or anyone else in the cast or want to experience some genuine Irish culture and aesthetics on the big screen, The Banshees of Inisherin might still be worth a viewing.