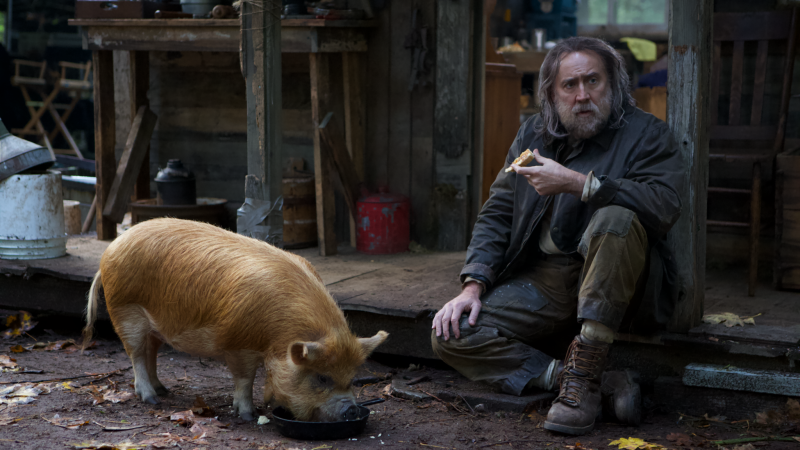 At the Movies: The Surprisingly Effective Story of a Man and His Pig

The latest and surprisingly best gritty indie drama to hit the public, Michael Sarnoski’s Pig, is more along the lines of a buddy movie than a thriller or action flick. And even more surprising is that the buddies paired don’t include the pig.

In the greater wilderness of Oregon, Robin Feld (Nicolas Cage) is a once-respected local chef who has been living as a recluse for more than a decade with the bare minimums since the death of his soulmate. His only company is a female pig and his only human communication seems to be with a modern yuppie named Amir (Alex Wolff), who stops by once a week for a “supply.” When Rob’s pig is kidnapped in the middle of the night, the cook ropes Amir into aiding him in finding and rescuing the animal and returning it home.

Pig is Sarnoski’s feature film debut as a writer-director and already shows he has a distinct vision and style to help him stand out in the future. Cage shows once more how versatile his career can be when he’s not phoning it in with mediocre, low-budget schlock. Like previously with David Gordon Green’s Joe (2013) and Panos Cosmatos’ Mandy (2018), Cage isn’t afraid to make himself look and feel dirty in a seedy underworld environment. In this case, it’s bizarrely and nearly humorously the food industry, which is portrayed and treated as the mafia or drug lords of the PNW. What’s impressive is that even with the ridiculous perspective, the film is never unintentionally funny or breaks its tone, staying consistently atmospheric and effective.

Sarnoski’s movie could have been another one-man-against-society revenge piece, but instead is a fascinating, original take on the old guiding the young. Pig is just the right amount of weird and intriguing.