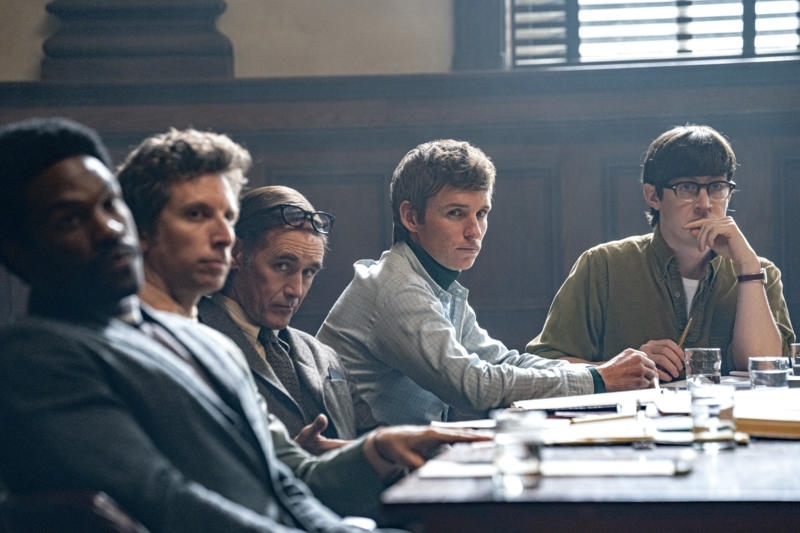 Aaron Sorkin’s new feature, The Trial of the Chicago 7, takes us back to Illinois in 1968 following the Democratic National Convention. The film is Sorkin’s second film in the directing chair after the slightly underwhelming Molly’s Game (2017), and a return to the courthouse 28 years after penning Rob Reiner’s A Few Good Men (1992).

Based on real events in Chicago at the tail end of the 1968 summer season, seven White men and one Black man are arrested and charged by the federal government with conspiracy to incite riots at the Democratic Convention. The men include Abbie Hoffman (Sacha Baron Cohen), Jerry Rubin (Jeremy Strong), Tom Hayden (Eddie Redmayne) and Bobby Seale (Yahya Abdul-Mahteen II). All of them are grouped together for the infamous trial that would span over a year, with the seemingly incompetent District Judge Julius Hoffman (Frank Langella) presiding.

On the surface, The Trial of the Chicago 7 was, for me, a huge step forward from Molly’s Game. While the latter felt clearly like a screenwriter’s first time directing, this go-around, Sorkin seems more comfortable in the position. I’ve always enjoyed Cohen in more dramatic roles outside of his comedy vehicles, and he doesn’t disappoint here. The biggest pleasant surprise might be from English actor Redmayne, whom I don’t think I’ve seen cast as an American before and would have completely fooled me if I were new to him as an actor.

A setback I’ve seen claimed from recent feedback on Chicago 7 is that the mood and setting are too polished and idyllic. I enjoyed the tone and atmosphere Sorkin set up here for a mainstream docudrama, but for appropriate relevancy in both history and current events, I can see why it might come off a little too whimsical as well (especially the ending).

I think The Trial of the Chicago 7 is still worth a viewing for anyone interested in seeing a rare new movie in 2020 that is both historically and currently relevant—with one seriously talented all-star cast, and coined by a screenwriter and director who is no stranger to quality biopics.