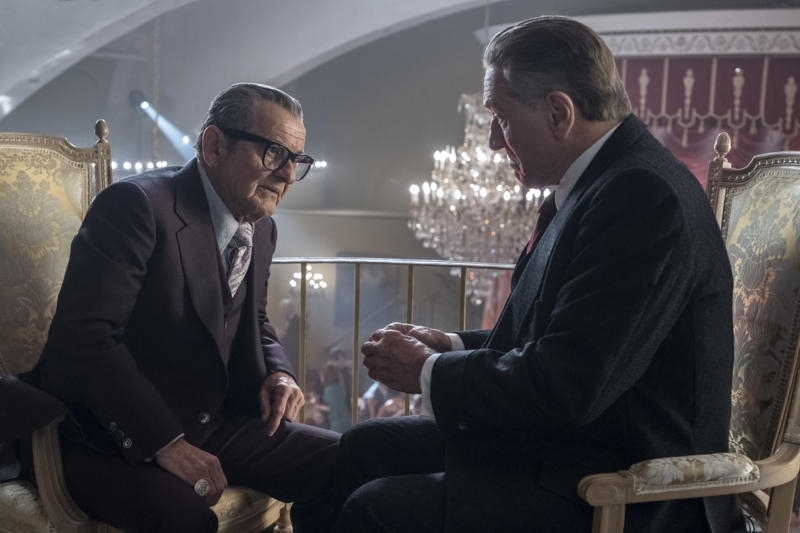 At the Movies: There’s Still Time for ‘The Irishman’ this Christmas

For those who are a fan of watching movies and staying home during the holiday season, Netflix’s The Irishman might be for you. We’ve seen this rise-and-fall story already in Martin Scorsese’s classics GoodFellas (1990) and Casino (1995). And yet, it took almost a decade to find a studio to make a third addition. My theory is that while the first two crime films were flashy and exciting, The Irishman is slow and melancholy.

From the 1950s to 1990s, Frank Sheeran (Robert De Niro) begins as a simple family man with a successful trucking company. Things take a turn when he’s accused of company theft. Popular attorney Bill Bufalino (Ray Romano) successfully gets him off the hook and introduces Frank to his cousin, Russell Bufalino (Joe Pesci). Russ is the head of the underworld mob in Philly and thinks Frank would be a good addition to the crime family. From decade to decade, we see the Irish-American gangster become close to Russ and his team, and he also becomes good friends with controversial union leader Jimmy Hoffa (Al Pacino).

To discuss Scorsese’s talent and success at this point would be redundant. But what could be emphasized a little more is just how much the man loves film. With a runtime of more than three hours, it is mesmerizing to see him and his regulars—De Niro, Pesci, Harvey Keitel, screenwriter Steven Zaillian and editor Thelma Schoonmaker among them—work together one more time. It’s predictable, but seeing the 1970s film stars all share the same screen and play off each other is a complete thrill. Even so, it’s still a very downbeat, bleak journey. If there was ever a movie to not be accused of glamorizing the mafia, it’s The Irishman.