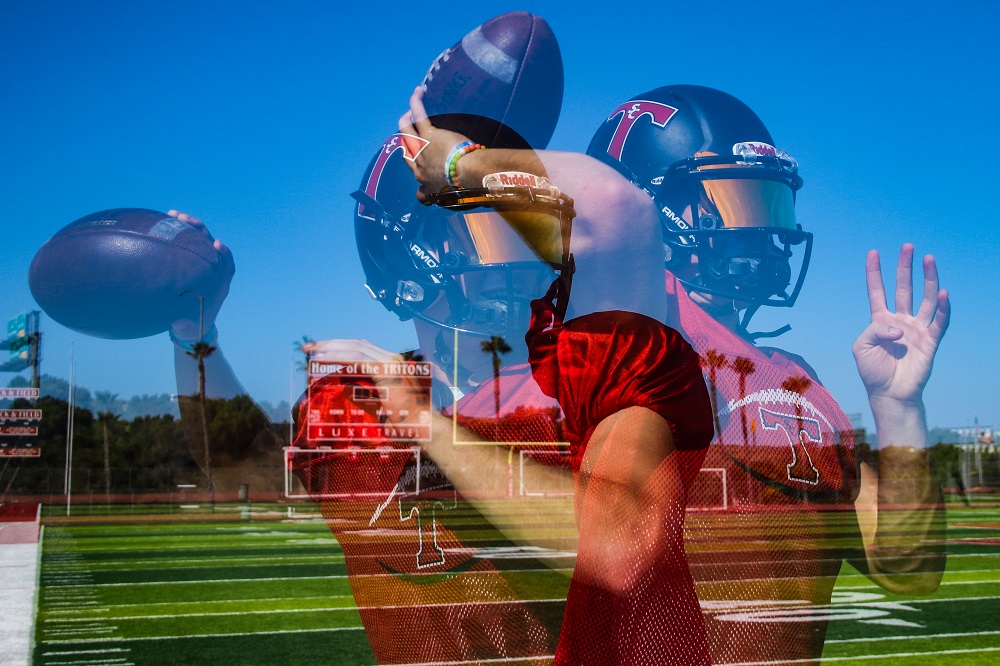 Attack the Future: San Clemente Football Eager to Prove Its Worth in South Coast League, Division 1

In our annual San Clemente High School football preview we delve into everything you need to know about the upcoming Triton season. Scroll through the PDF version above for more photos and interviews.

Where can they go from here?

San Clemente High School football finally climbed the mountain in 2016 with a CIF-SS Division 2 title and State Division 1-A title. In the playoffs, the best they could do would be to repeat the feat.

The task was made infinitely harder as San Clemente’s success bumped it up to the exponentially harder Division 1 for 2017. The Tritons fell in the first round to Rancho Cucamonga, who eventually lost in the semifinals to national champion Mater Dei.

For 2018, San Clemente held on to one of the last Division 1 spots in the CIF-SS power rankings, No. 15 of 18 teams. So as long as the Tritons finish the season in the South Coast League’s top two and/or above .500, they should be expected to make the Division 1 playoffs again and repeat going up against one of Southern California’s best.

So what can they do?

Since 2014, the Tritons are 45-10 with Sea View League titles in 2014 and 2015. The one thing San Clemente hasn’t done in recent times is beat Mission Viejo and win the South Coast League title.

“It’s up to these players to continue to raise that bar,” San Clemente coach Jaime Ortiz said. “We take great pride in our program, who we are and what we represent. It’s important for our players to keep that model going.”

The Tritons are 0-11-1 against the Diablos since 2004. San Clemente has been the perennial bridesmaid to Mission Viejo’s bride in the South Coast League. As long as San Clemente kept up this competitive run, they seemed destined to finish second to Mission Viejo and take an early exit in Division 1.

But what if there was an opening?

“We’ve got some key pieces to the puzzle in place,” Ortiz said. “Whether it’s Mission, Tesoro or Capo Valley, “to be the man, you have to beat the man,” to quote the great Ric Flair.”

The current Triton senior class got their first licks of varsity football experience as sophomores as San Clemente made that state championship run. They have the knowledge. They have the feeling.

San Clemente has a dynamic quarterback and unique offensive assets that make them dangerous. The Tritons have a speedy defense with plenty of fresh players eager to prove themselves.

As Mission Viejo goes through a change in eras, is this San Clemente’s chance to burst through and upset the balance of the South Coast League?

The focal point for any outside observer of San Clemente football will be under center.

Tradition has been established that the Tritons have a bit of a quarterback factory. This is furthered by San Clemente alums being involved in two of the more intriguing quarterback battles in all of football: Sam Darnold with the New York Jets and Jack Sears at USC.

Brendan Costello came in as a junior transfer last season and perfectly filled the shoes of next in line.

“It’s great to keep the legacy going,” Costello said. “They’ve definitely instilled a very high standard here. I’m just blessed to be a part of it and be in those names.”

Costello completed over 64 percent of his passes for 2,132 yards with 23 touchdowns and added 392 yards rushing with five touchdowns.

In 2018, Costello will have to repeat those numbers without the aid of his top four receivers and leading rusher from a year ago. However, the new faces aren’t all that new, mostly seniors, and they each bring unique elements.

The two targets that will immediately draw the eye are a pair of 6-foot-5 senior tight ends, Jay Baggs and Wakely Lush. Baggs (228 lbs.) caught six passes for 80 yards with two touchdowns last season, and Lush (235 lbs.) was out last season with a torn ACL.

“They’re both big bodies that can have a presence on the field,” Ortiz said. “For a defensive coach, it’s a pretty tough matchup. Kids that big going out and running routes against linebackers.”

A tall target on the outside is senior wide receiver Jaydel Jenkins. The 6-foot-3 Jenkins and 6-foot-2 junior Cian Smith have put in extra face time this offseason to build a bond with their quarterback.

“We’ve definitely put the extra time in working on the chemistry,” Costello said. “We’re still coming along, but it’s getting better. I think we have a lot of potential.”

The backfield will be anchored by senior RJ Donaldson and a speedy, physical sophomore in James Bohls. Bohls, a member of the Tritons 4×100-meter relay team as a freshman, has the tools for a breakout season behind an offensive line that’s coming together.

Graduation truly hit San Clemente on the defensive side of the ball as nine of the top 10 tacklers from last season grabbed their diplomas.

The one of that 10 returning is senior linebacker Rob Farney. Farney was third in tackles with 81 and had five sacks. Senior cornerback Ray Ferrell also brings experience, along with senior linebacker Kason Krebs, a transfer from Mission Viejo.

“Just trying to find the nucleus of those guys and who they’re going to be” Ortiz said. “On an average defense, 11 start but there’s 14-15 guys who rotate in. Our job as a coaching staff is to find who those 14-15 guys are. It’s going to be a good mix of sophomores, juniors and seniors.”

San Clemente defenses are known for being tenacious, and that tenacity will showcase itself in 2018 with team speed. It’s evident to their practice partners on the other side of the ball.

“They are a lot faster than previously,” senior center Brayden Young said. “They fly around. They attack the ball. They chase after it. It’s not just a strength tackle. It’s nine guys on the ball.”

So where does this leave the Tritons in regards to the South Coast League and beyond?

There are plenty of seniors on the team that were sophomores in the 2016 state title run, but not many that actually got the chance to play. That makes this a group of players that have seen what it takes to win and now have an opportunity to prove that they can as well.

“I think we can prove we can compete with anybody,” Jay Baggs said. “There’s a lot of five-star players and teams. It’s not about that. It’s about working together. We’ve got a great town. One town,

one team. We’ve got the whole crowd here. We’re going to work together and try to win.”

San Clemente’s nonleague schedule is grueling with some of San Diego’s best before some Orange County tests leading into league play.

The South Coast League gets a shake-up as El Toro and Capistrano Valley rejoin the fray from the Sea View League, and reigning league champion Mission Viejo is going through a change in eras. Legendary coach Bob Johnson retired last season, and new coach Chad Johnson, no relation, has a big legacy to live up to.

“We like to be challenged,” Young said. “What we’ve got to prove is that we can stand in D-1 football and make a name for ourselves. We can respect the past and attack the future.”

San Clemente has the opportunity to rise to the challenge and set its own future.