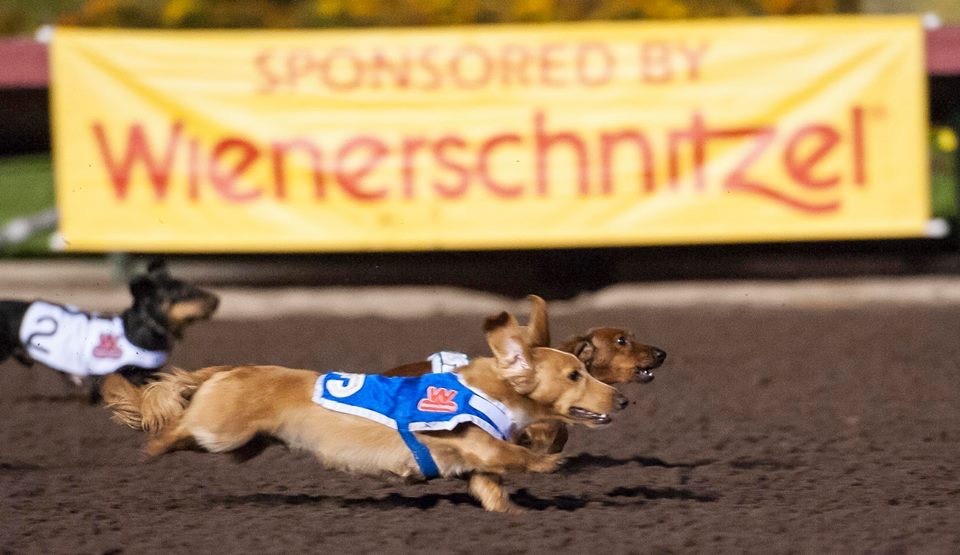 What motivates a champion?

For some, it’s fame and glory. For others, it’s the validation of the hard work put in.

Some want the trophy and the title, to prove others wrong or to show that they are the best at what they do. More than a few might be looking toward a hearty meal after months of exercise and starvation.

However, the latest champion athlete to live and train in San Clemente does not strive for any of these things. He scratches and claws for just one unique prize: his beach ball.

Finn’s parents, Josh and Brittany Snook, wear shirts and hats of support as they cheer on Finn in the Wienerschnitzel Weiner Nationals race at Los Alamitos Race Course. Photo: Courtesy

Finn chomps on his beach ball following his win in the 2015 Wienerschnitzel Wiener Nationals at Los Alamitos Race Course. The ball motivates Finn to chase towards the finish line. Photo: Courtesy

Finn’s parents, Josh and Brittany Snook, wear shirts and hats of support as they cheer on Finn in the Wienerschnitzel Weiner Nationals race at Los Alamitos Race Course. Photo: Courtesy

Finn races in the 2015 Wienerschnitzel Wiener Nationals at Los Alamitos Race Course. Finn won the 2015 title and is looking to get back on top in 2018. Photo: Courtesy

Finn races in the 2015 Wienerschnitzel Wiener Nationals at Los Alamitos Race Course. Finn won the 2015 title and is looking to get back on top in 2018. Photo: Courtesy

Meet Finn, a 5-year-old racing dachshund and 2015 champion of the Wienerschnitzel Wiener Nationals at Los Alamitos Race Course. Finn earned third place in 2016 and had a tough 2017, but he’s coming back strong looking for the 2018 title of “Fastest Wiener in the West” in the 23rd edition of the event on Saturday, July 21 at Los Alamitos Race Course.

Finn’s parents, Josh and Brittany Snook, first learned of the races from a friend while living in Los Angeles County. The event, which raises funds for the Seal Beach Animal Care Center, looked fun to the pair and they took Finn to some trial races to see how he’d do.

The Snooks quickly realized that Finn might have some talent but might need a different motivation to focus on the finish line.

“We stood at the finish line with a bit of bacon and figured he’d go straight after that,” Josh said. “He went straight out of the gate, but he made a beeline to other people’s stuffed animals they were holding.”

Finn had shown a major interest in playing ball in park time with the Snooks, so Josh and Brittany tested out the beach ball. They found a winner.

“He goes crazy for the beach ball,” Josh said. “It’s not great for training because they have to keep being replaced, but he loves it.”

Finn took to the major competition at the 2015 Wiener Nationals, and with Josh and Brittany cheering on, wearing foam shark visors with “Finn” written on the side, he won straightaway with a time of 7.8 seconds in the 50-yard sprint.

Finn won an A-frame Wienerschnitzel doghouse, a championship trophy, a blanket and a $1,000 cash prize.

Finn took third place in 2016 and was bumped hard early in the 2017 to fall out of contention.

Finn has kept hard at training, and while getting his beach ball is still primary goal No. 1, the Snooks know they have to pace the former champion.

“We don’t give him the ball all the time, or else it wouldn’t be special,” Josh said. “But he knows. He can smell the beach ball in our bag, and he lights up. When he knows the ball is in the bag, he knows it’s go time.”

The Snooks moved to San Clemente in December of 2017, and with plentiful park space and the extra benefit of beach training, Finn has had plenty of preparation.

Finn would only be the third dog to win the event twice and just the second to win in nonconsecutive years, and he has the opportunity. Finn just needs to keep his eyes on the ball.