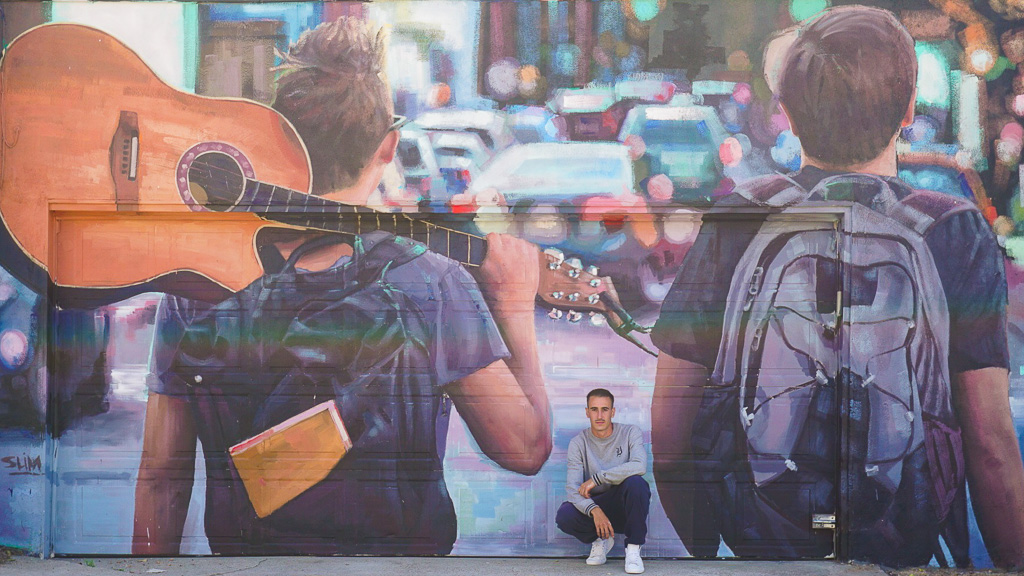 An artist who goes by the name “Slim” has just completed a new mural at House of Trestles.

The 23-year-old from Barcelona, Spain, is one of four international street artists selected for this year’s Street Artist in Residence program at the San Clemente surf hostel and art gallery.

During their stay, artists are given wall space at House of Trestles for a final mural to conclude their residency, which can last anywhere from 30 to 90 days.

Owner Joshua Host said the mural supports the gallery’s mission in bringing public art to a street that has suffered a less-than-stellar reputation in the past, trying to move on from the moniker “Crack Alley.”

“We felt that it was a very unfair stigma, so we embarked on this idea to make public art ubiquitous on Del Comercio,” Host said. “That’s the whole idea, to break that stigma and make it a really beautiful street to walk down.”

Two new street artists will arrive for their residency at House of Trestles in October. They are “chimp.one” of New Zealand and “DIFUZ” of France. Until then, the hostel will continue to host its usual influx of travelers and surf enthusiasts during its peak summer season.

Slim finished his mural in two and a half days using a paintbrush and about three gallons of acrylic primary colors. He is the first street art resident to use a brush rather than spray paint.

The artist said he recently made the switch to challenge himself.
“I had perfect technique with spray paint, but I didn’t feel like I was growing as an artist. I was very bored, so I changed,” Slim said.

His mural is inspired by his time spent in San Clemente. It depicts two young travelers in search of adventures and new experiences, and it can be viewed on the backside of House of Trestles facing Calle Del Comercio.

Slim began doing graffiti art at the age of 12 and went on to study fine art at the University of Barcelona. He was selected from a pool of 58 other artists who applied this year for the Street Artist in Residence program.

“I’ve always wanted to come to California,” said Slim, whose native language is Catalan. “I had this place in my mind.”

Host said House of Trestle’s residency program was developed in 2017 to give artists around the world an opportunity to gain exposure and promote their work, especially in the Los Angeles art scene.

Slim has completed four murals so far during his first visit to the United States—one in Carlsbad, one in San Clemente and two in Los Angeles locations: the Historic Filipinotown and The Container Yard in the Arts District.

When asked why he does art, Slim said, “I think that it is a very important social tool. It is important to change the minds of the people that are always looking and watching things the same.”

“It’s special,” he said. “Especially art of scale . . . it’s something that makes you feel child-like, opens up conversation and breeds wonderment.”

The program is gaining recognition by international street artists, Host said.
“Every year, the number of applicants doubles,” he said. “It becomes a medium, as far as for artists like Slim, to build their brand.”

Slim summed up his trip as being “very good.” He’s a fan of the warm weather, beaches and nice people in San Clemente. He said he will continue his artistic ventures in New York before returning to Spain.

Slim’s mural will tentatively stay on the wall for up to a year, Host said. However, the rule in the graffiti art world is a painting only exists until someone feels they can paint something better over it.

At the House of Trestles, which celebrates its second anniversary in June, Host said, “Things are always changing.”