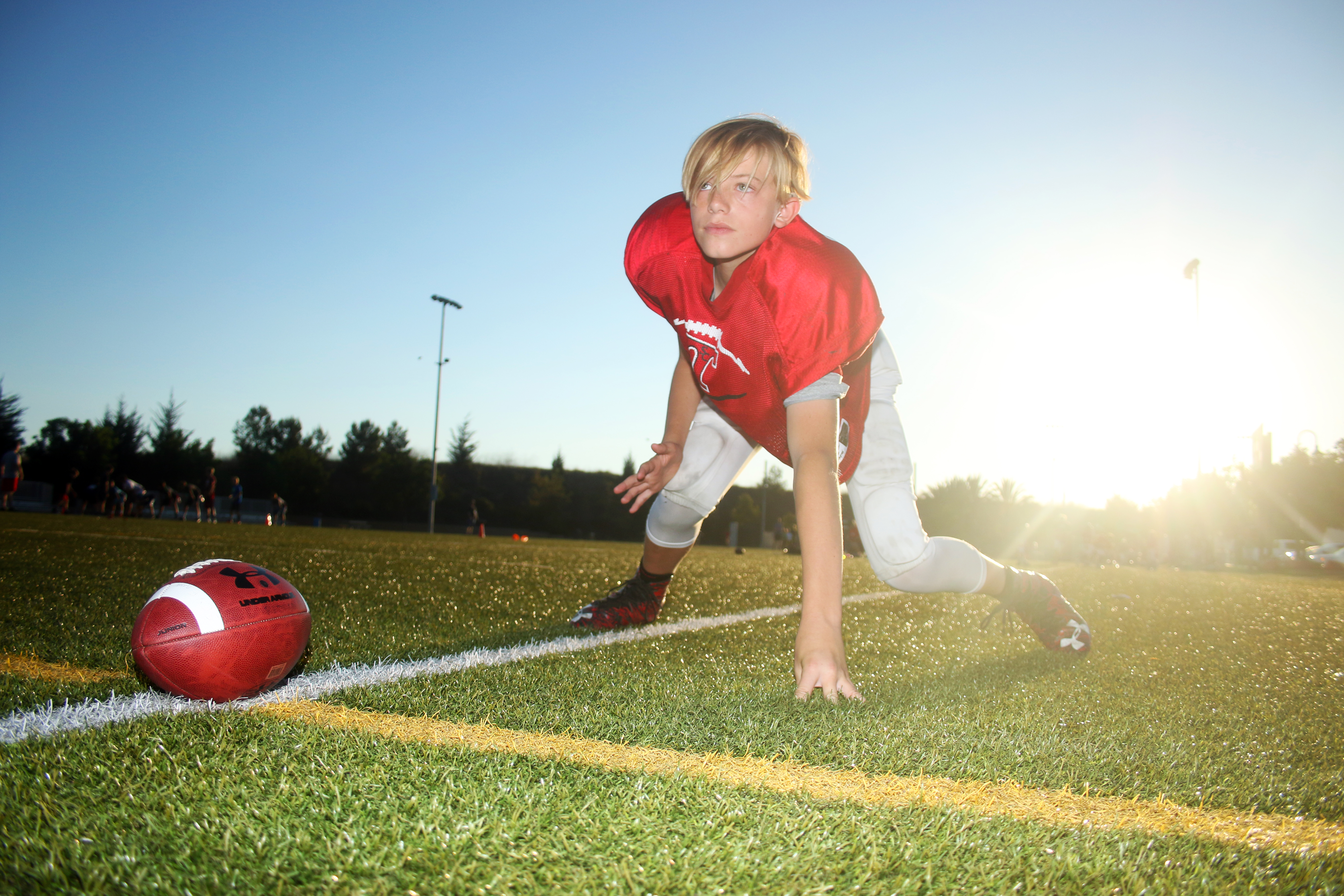 If there was a football player destined to play with a physical style and relentless motor, there are none with a more fitting name than Battle Gideons.

Battle plays for the Triton Pee Wee Black team of the South Coast Youth Football league. It’s his first season playing tackle football and while he was a main contributor on the Triton’s Orange Bowl-winning championship team, showing great upside and improvement in just a few short weeks, the hurdles he has overcome to do it all are just as impressive.

He received his first hearing aid at the age of three, got his first cochlear implant at 16 months and received his second implant in the other ear a month after his sixth birthday.

Now, wearing a special custom helmet that allows him to wear an aid in one ear, Battle is doing what he enjoys most—making plays on the field.

An early interest in basketball made Battle and his family aware that he could be a talented athlete. When Battle would play in youth hoops leagues, his hearing aid would sometimes get swatted off his head by an opposing player and Battle, never one to quit on a play, would not break stride and instead kick the costly device off the court and continue to play on.

That same motor translated to his first year in pads on the football field. Battle found a home at defensive tackle for the Triton Pee Wee Black team midway through their season. The team beat a Pee Wee team from Santa Margarita 26-6 on Oct. 28 to close out its season with an Orange Bowl championship, thanks in part to the Tritons ability to stop the run on defense.

“(Battle’s) name fits him perfectly,” said Triton Pee Wee Black coach Brian Bachhuber. “Off the field he’s very unassuming and a very polite, respectful kid. But when he gets on the field he turns it on.”

“He would be just crazy aggressive. His dad would say he was the most penalized kid in flag football,” Battle’s mother, Valli Gideons, said with a laugh. “He kept begging us to let him play tackle.”

Valli and her husband, Christopher, had their concerns about their son playing tackle football at an early age. There was the possibility that a hit to Battle’s head could dislodge his implant, but the family was assured the odds of that happening were microscopic.

There were also logistical concerns.

Battle has to take one of his hearing aids out when he plays. When he does, his hearing is limited. Speaking with someone one-on-one is no problem for Battle, but a huddle full of excited kids in the middle of a game is a different story. Battle learned to focus in and pay close attention when a play call comes through on the sidelines.

“Sometimes I have to work harder. But I just got used to it,” Battle said.

Another factor that played into Battle having an impressive debut season on the field was the relationship with his father, Christopher. Christopher is a Colonel in the Marines and is the commanding officer of the 1st Marine Regiment stationed at Camp Pendleton. He played middle linebacker at the Virginia Military Institute and passed his love of the game on to his son.

The nature of his job causes him to miss some of Battle’s games, but through the use of an online video app, Christopher can watch tapes of the games while away with the Marines. The two have film study sessions, breaking down plays over the phone. Battle wears the number 52, which is the same number Christopher wore in college.

Battle said his favorite part of the season was the Orange Bowl championship they won this past weekend. The Tritons started the year with a losing 0-3-1 record, but rallied to finish 5-4-1 and claim the Division 4 Championship.