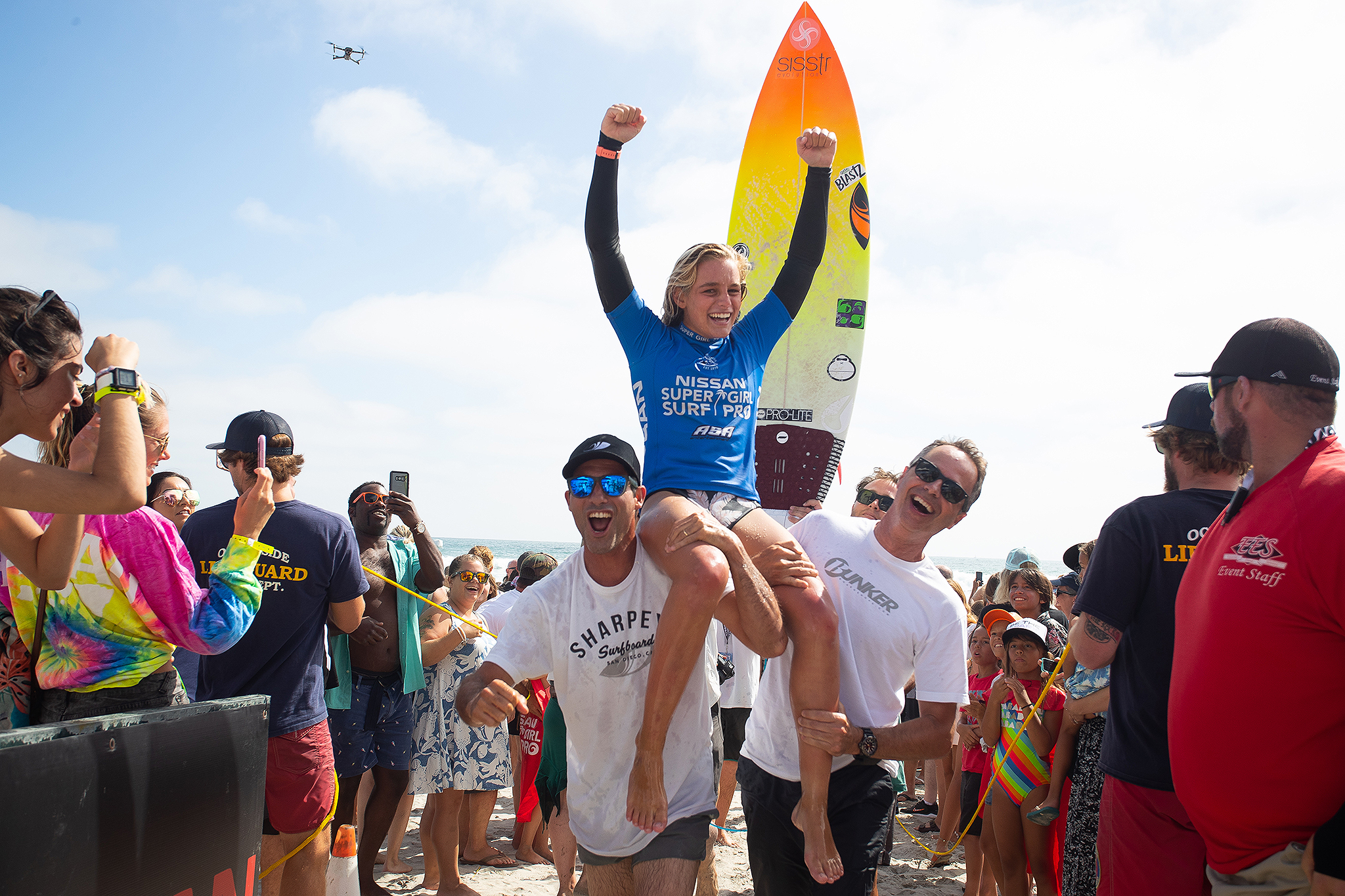 ‘Best Day of My Life’

When it comes to making the big time in surfing, sometimes all it takes is a breakout win to initiate the upward trajectory. Last Sunday, 17-year-old San Clemente surfer Samantha Sibley won the Nissan Super Girl Pro in Oceanside. And just like that, she’s gone from regular fixture in the Grom of the Week feature to potentially qualifying for the WSL’s 2020 Championship Tour.

“I’ve been coming to this event ever since I was little, standing on this beach, taking pictures with all my heroes, and now to be the Super Girl, I’m at a loss for words,” Sibley said after her big win.

Sibley’s road to the top of the podium was anything but easy. In the quarterfinals, she had to go up against her San Clemente sparring partner and reigning WSL junior world champ, Kirra Pinkerton. After edging out her friend, the semifinals and finals would prove to be a huge test for Sibley.

Drawing Marks in the semis, one would have assumed Sibley’s dream run was going to come to a close. Marks is currently ranked fifth in the world and was the 2018 WSL Rookie of the Year on the Championship Tour. But Sibley and Marks are the same age, both surf Lowers often, and so maybe the disparity in experience wasn’t that much of a factor, after all. In a low-scoring heat, Sibley took the win and moved on to the finals.

Facing Tatiana Weston-Webb, who’s also currently ranked in the top 10 in the world, Sibley again had her work cut out for her. Ironically, Weston-Webb had been staying with Sibley during the contest and helping to mentor her through her first experience on the big stage. But it didn’t take long for the student to become the teacher. Sibley dropped the hammer, winning the Super Girl Pro in convincing fashion.

“This is by far the best day of my life, and I cannot believe I just won the Super Girl,” Sibley said. “I’ve been working so hard leading up to this event, and to see it pay off, I can’t believe it. This is the most prestigious event in my opinion, and to win it is out of this world. It meant the world to me to be out there with Tatiana. She’s so strong, and if I could’ve picked any heat with any surfer, it’d be her. I’ve looked up to her for years, and now we’re really good friends, so to be in a Final with her was just the cherry on top.”

“Sam and I were staying together the entire event and spoke it into existence,” Weston-Webb said, smiling when it was over. “I talked about how fun it would be to share a final against Sam at the beginning of the event, and to have it come true was really cool. I’m super proud of her, and it’s so awesome to see.”

For the effort, Sibley flies up the ratings, moving from 52 up to No. 6. It’s still a long season, and there are a lot more qualification points left to be had, but it’s a huge step forward not only for Sibley, but also for Pinkerton, who now sits third on the qualifying series. At the end of the year, the top six surfers from the qualifying series rankings get a spot on the elite WSL Championship Tour (barring those who have already qualified through the Championship Tour rankings).

“I’m so stoked to move so far up the rankings. At the beginning of the year, I didn’t feel like it was my time to qualify, but now it’s right there in my grasp,” said Sibley.

Up next, Sibley, Pinkerton and a whole crew of local South Orange County pro surfers are getting after it all week in the Vans U.S. Open of Surfing in Huntington Beach, with the finals on Sunday, Aug. 4. The annual spectacle draws hundreds of thousands of fans every year and also features BMX and skateboard competitions. Check USOpenOfSurfing.com for the live webcast and daily schedule.