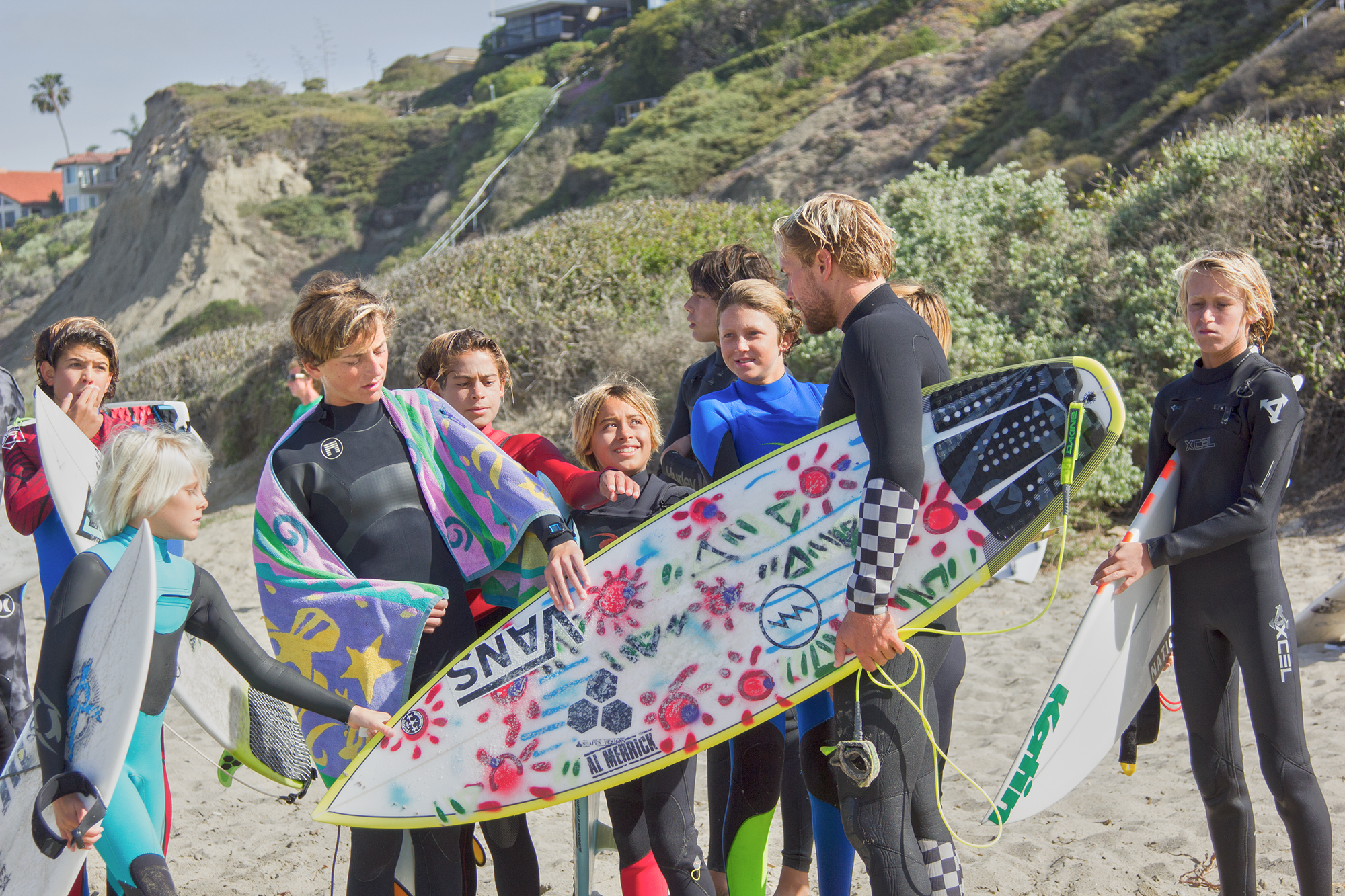 San Clemente and Dana Point are known for cultivating surf talent, and surfing with the pros could be just the motivation needed to propel the next local grom to stardom. Sometimes, despite their talent, local youth can feel like small fish in a big pond and the dream of making it to the World Tour seems daunting. It is with this in mind—along with the simple desire to put on a fun community-centered event—that local pro Nathan Yeomans has been hosting the Fishbowl Pro.

The event invites local groms, 15 and under, and pairs them with a professional surfer. The duo then compete as a team.

This year’s event, on April 25, marked the contest’s third annual running and attracted a gifted pool of surfers, as well as the most attention in the Fishbowl’s history. The excitement from the competitors, both pros and groms, was at an all-time high as well, Yeomans said.

“I was an honor and an awesome experience to get to know and surf with people I look up to,” said Cole Houshmand, one of the grom competitors.

As the winners, the team of Chippa Wilson and Kei Kobayashi were crowned the “Biggest Fish in the Pond.” Runners-up were Kolohe Andino and Gus Day. Tanner Gudauskas and Griffin Colapinto came in third, Jeremy Carter and Crosby Colapinto in fourth and Luke Davis and Taj Lindblad rounded out the podium in fifth place.

We caught up with Yeomans as he reflected back on the 2014 Fishbowl to find out what he thinks about the future of the event. Here is some of what he had to say:

SC TIMES: What are your plans for the event next year?

YEOMANS: We’re looking to expand and would like some financial support to make it happen. It’s now at the point where it should be attractive to sponsors. It’s grown from more than just a locals’ beach day into an epic event. It’s always been about calling or texting my buddies to make it happen but I think we’re in a position now that we could get some sponsorship.

SCT: Part of the “coolness factor” comes from its Riviera location. Are you OK with the possibility of moving it to grow the event?

YEOMANS: I think it’s feasible to keep it at Riviera. Ideally, I would like it to stay there. That’s what I’m hoping for because it feels more grassroots. It’s where a lot of the kids surf, where we grew up surfing and it keeps it really within the community. It keeps the organic feel. It’s where we all surf with our families in the summer. Rivi is not like Trestles or the Pier. It’s a locals secret spot, so it’s a great place to capture that feel, both for the local kids and for those of us who grew up here.

SCT: What is your main goal with hosting the Fishbowl Pro?

YEOMANS: My goal is to give back to a sport that has given me so much. So to be able to kick start relationships between some of the younger kids and the pros is cool. As they transition from amateurs to pros, the kids will have a network of people they know to possibly help them in the next step of their careers, people who can help them be all they can be. Imagine being 13 years old and having the opportunity to be a teammate with a pro. Also, I just want to make a really memorable beach day and gather the surf community together to celebrate doing what we love.

SCT: What’s in it for you and your fellow pro surfers?

YEOMANS: For those of us who have made surfing our profession, it takes us back to the time when we were just groms with a dream. When I was a kid, the pros seemed unapproachable. So providing an opportunity for groms to interact with pros, get tips from us and realize that we have learned a lot that can be passed down to them is the ultimate goal. It really takes me back to that time and rekindles the love for being able to surf professionally and do what I love. It reminds us that we are so blessed to be living out our dreams.

Those interested in helping to support, sponsor or promote next year’s event, should contact Nate Yeomans via email at n8yeomans@yahoo.com.