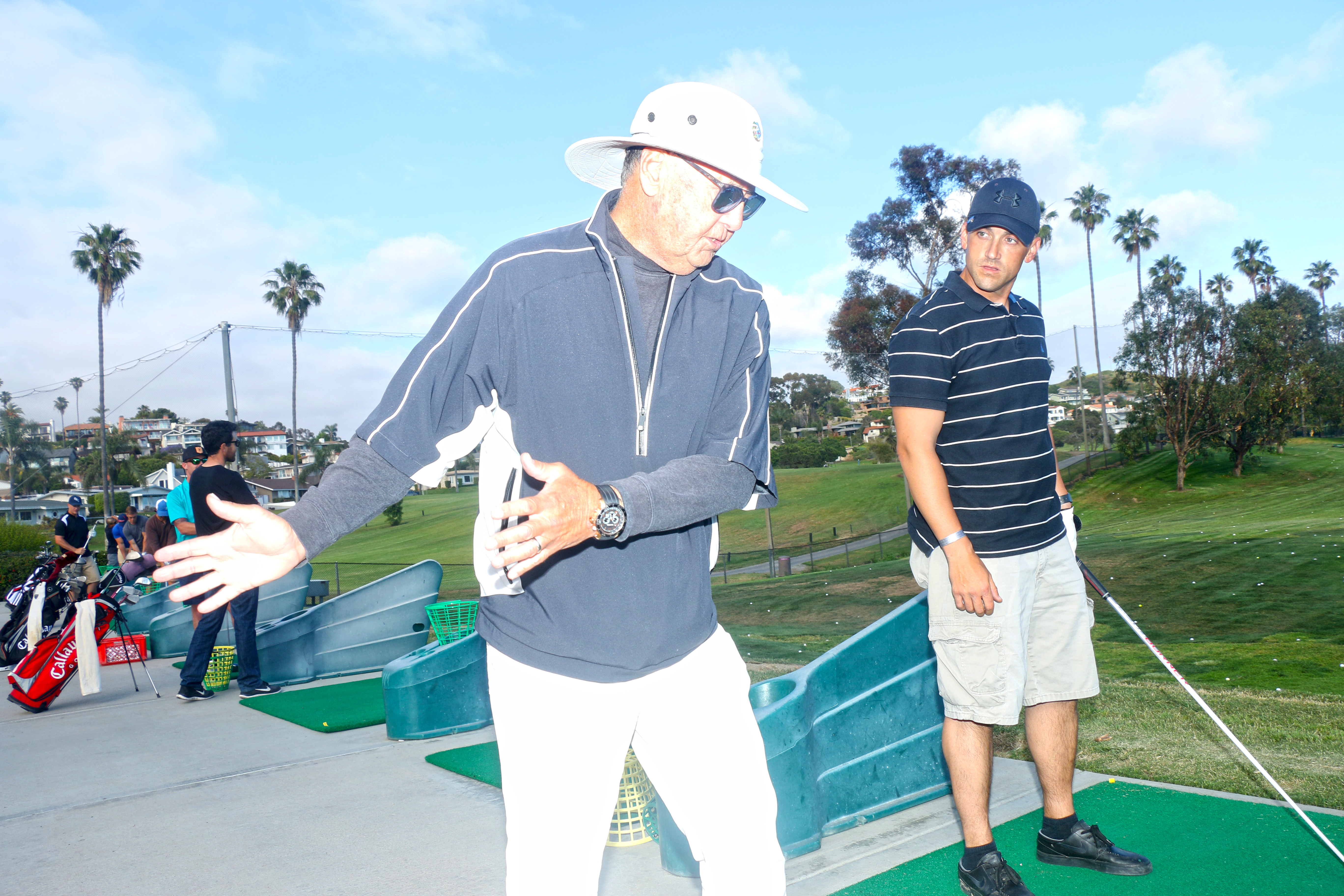 Cpl. Matthew Coker spends about 10 seconds processing the information he was just given. His brain is churning and calculating, attempting to make an adjustment.

His target, which he just missed, is roughly 200 yards away. The wind is blowing slightly in from right to left and now several pairs of eyes are on him.

He takes a deep breath, settles in and executes a smooth, powerful swing, sending a little white ball sailing past the blue signpost and into the net at the back of the San Clemente Municipal Golf Course’s driving range.

He poses while the ball is mid-flight and lets out a triumphant, “Woo!” His friend and fellow Marine, Mike, nods in approval on the hitting mat to his left.

Moments before, Rafkin, one of the teaching professionals at the Muni, told Coker to let his right hand rotate more freely through the hitting zone, helping to fight Coker’s big miss—the dreaded slice. As soon as his pupil corrected the mistake, Rafkin gave a word of encouragement and went on to help the next Marine searching for his own perfect shot.

Coker, a native of Edmond, Oklahoma who has been stationed at Camp Pendleton for four years, was one of 15 Marines who took part in the Donald J. Hogan Memorial Golf Program at the Muni on May 25. The program offers golf instruction and provides equipment, balls and time on the course to active-duty military and their families free of charge every Thursday throughout the summer.

Some of the servicemen that attend are brand new to the sport, having never swung a golf club before taking the weekly lessons. Others, like Coker, are golf diehards who sport their own top-of-the-line clubs.

“This is the biggest thing we do for fun. We look forward to Thursday lessons. Golf is all we talk about Monday through Wednesday.” Coker said with a laugh.

Several of the beginners showed up to Thursday’s lesson with nothing but open minds, athletic shoes and ice-cold beer.

Rafkin took two Marines without equipment, including E4 Cpl. Luke Bingham, down below the Muni’s clubhouse and handed each of them a full set of clubs. Bingham thought they were just to rent out for the day, and was shocked to learn the set was his to keep for good.

Bingham and the other Marine thanked Rafkin several times and shook his hand, but Rafkin deflected the praise and instead thanked the men for their service.

Bingham hails from golf-crazy Augusta, Georgia, but, ironically, never cared for the sport growing up. He liked attending the Masters Tournament in his hometown and would make a few bucks working security at the event or driving tourists to and from the course every year, but the lure of the links never called to him until he joined the military.

“Golfing in general is a great way to get with the guys, kill an afternoon, have some fun and make some memories out here,” Bingham said. “We just kind of detox from work and stress and just let it all go and have a good time.”

After attending his first lesson at the Muni, Bingham plans on being a regular.

Rafkin starts each one-hour lesson with a general overview of what they will be working on that day. Last Thursday, he wanted them to work on transitioning from hitting the longest club in the bag, the driver, to hitting the shortest, the wedge.

The lessons cover everything from rules and etiquette to posture and course management. Putting lessons are on tap for this week. Two weeks ago, they covered chipping.

“I took the chipping lesson last Thursday, and I ended up playing the weekend after and ended up in that situation four or five times,” said Coker, who shoots scores anywhere between 90 and 100. “The lesson literally paid off in return.”

“The cool thing is, these guys listen 100 percent. When you say something, you don’t have to say it twice, they got it,” Rafkin said. “There are also a lot of great athletes in the group. It’s really fun to teach them.”

The program took on a life of its own five years ago after Paul Caringella, a San Clemente resident, saw Rafkin giving free lessons to a handful of Marines while having lunch on the clubhouse patio. Caringella liked the idea so much that he asked Rafkin how much it would cost to outfit the whole operation for a summer. Rafkin responded with a figure, and Caringella has delivered a check every year since to help cover costs.

Don Glasgow, another San Clemente resident, collects new and used golf equipment every year and donates sets like the one Bingham received. Dave Cook and Vinnie Poncino, the owner and head pro of the Muni’s golf shop, respectively, let the Marines take carts and waive green fees for them every Thursday. The program also offers a free kids summer camp.

“It’s really a grassroots deal and it just kind of fell into place. It was never planned, it just kind of happened out of the goodness of their hearts,” Rafkin said of the group effort.

At the end of each lesson, most of the Marines make a dash for the first tee. After last week’s session, Coker and his friend Mike decided to head over to the 10th tee, where it was less crowded.

As they head to the 10th tee box, Coker says he wants South of Nick’s for dinner. He’s never tried it, and he has a craving for Mexican food. With their dinner destination planned out, the pair’s attention snaps back to the task at hand, which is fitting in as much golf as humanly possible before they lose the light.

“I got so into golf. I got the bug,” Coker said. “You hit that one good shot, and that’s what you’re looking for, that pure feeling. It’s so hard to replicate it, but that’s what I’m hunting for.”