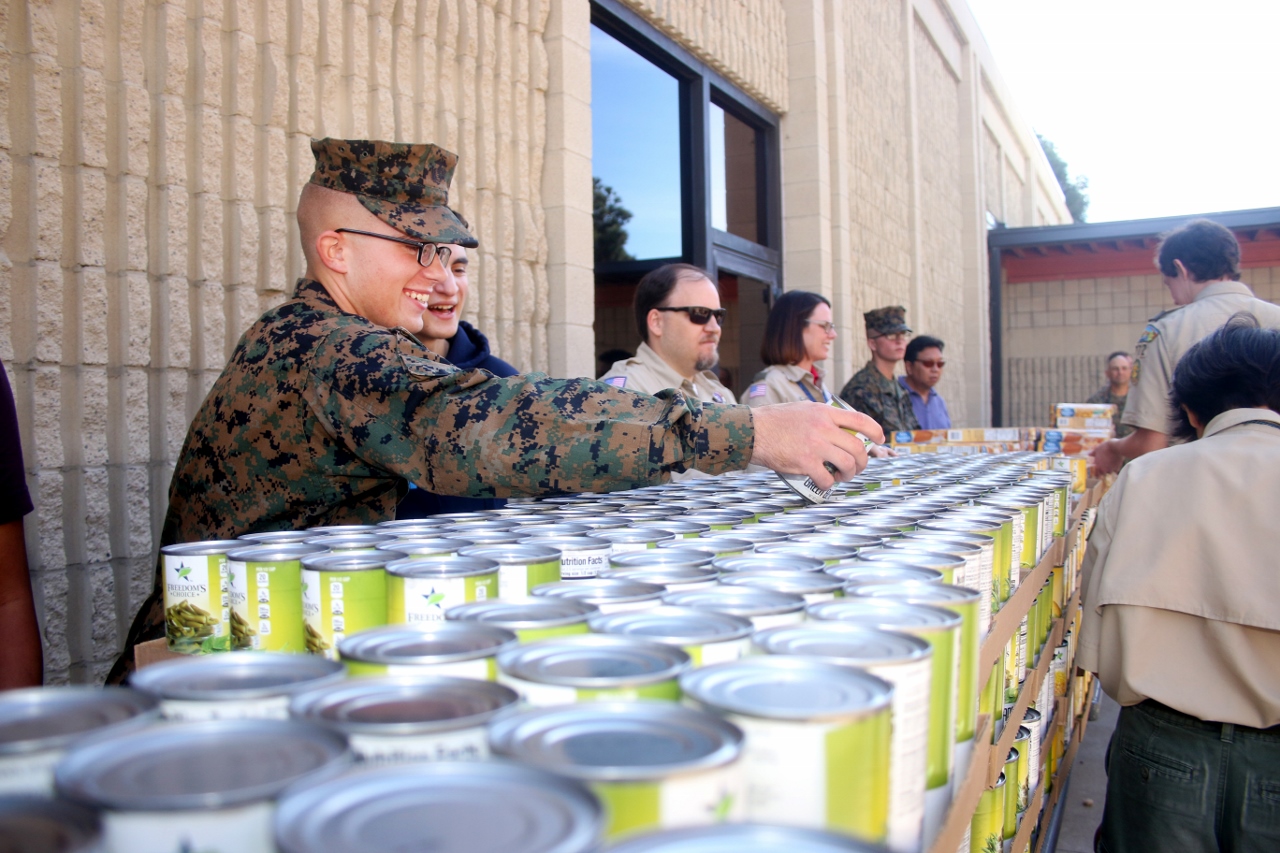 Remember when you were in grade school and participating in any kind of holiday tradition left you beyond ecstatic?

Issac Smith must have felt that way, as his mouth dropped and he clenched a box of stuffing to contain his excitement at the sight of Thanksgiving turkeys. He and his family received the bounty at Camp Pendleton during the San Clemente Military Family Outreach (SCMFO) Thanksgiving Turkey Giveaway for military personnel and their families on Nov. 20.

From left, Dianna Smith (above) receives a turkey for Thanksgiving with her children Mason, Owen and Issac on Nov. 20 at Camp Pendleton. Photo: Eric Heinz

Cans of food were stacked together on Nov. 20 for the San Clemente Military Family Outreach Turkey Giveaway. Photo: Eric Heinz

Marines distributed Turkeys to one another and their families during the 15th annual San Clemente Military Family Outreach Turkey Giveaway on Nov. 20 at Camp Pendleton. Photo: Eric Heinz

Smith was one of a few children, alongside his mother Dianna, who received food items for this year’s feast.

SCMFO donated turkeys to military personnel and their families for the 15th year in a row at the Camp Pendleton MCB Commissary. The organization donates between 800 and 1,000 turkeys each year.

“I think it helps a lot to relieve the stress and burdens off of military families because many of them have spouses who are deployed or they have multiple children,” said Arika Ferguson, a representative with SCMFO and the wife of a Marine who is stationed at Camp Pendleton. “A boxed meal is one less thing they have to worry about for Thanksgiving, so it means a lot.”

SCMFO raises funds for the event during a dinner in the fall called the Salute to Military Stars, and they receive contributions through its nonprofit.

“A retired Marine Corps colonel and his wife wanted to do something special for the base at Camp Pendleton, so…in 2002 they started the Thanksgiving Giveaway for a couple years, but after a while they couldn’t do it anymore,” said Clark Lashmett, the president of SCMFO, discussing founders Lt. Col William McReynolds and his wife Sidonia. “So they reached out to churches in the local area, and they helped too. From there, it kind of took off.”

Lashmett said the organization never had a problem raising enough funds for the event.

The National Fire Protection Association reported the following statistics and information about staying safe on Thanksgiving.

Thanksgiving is the peak day for home cooking fires, followed by the day before Thanksgiving, Christmas Day and Christmas Eve.

In 2015, U.S. fire departments responded to an estimated 1,760 home cooking fires on Thanksgiving, the peak day for such fires.

Unattended cooking was by far the leading contributing factor in cooking fires and fire deaths.

Cooking equipment was involved in almost half of all reported home fires and home fire injuries, and it is the second leading cause of home fire deaths.

Stay in the kitchen when you are cooking on the stovetop so you can keep an eye on the food.

Stay in the home when cooking your turkey and check on it frequently.

Keep children away from the stove.

Make sure kids stay away from hot food and liquids. The steam or splash from vegetables, gravy or coffee could cause serious burns.

Keep the floor clear so you don’t trip over kids, toys or bags.

Keep knives out of the reach of children.

Be sure electric cords from an electric knife, coffee maker, plate warmer or mixer are not dangling off the counter within easy reach of a child.

Keep matches and utility lighters out of the reach of children.

Never leave children alone in a room with a lit candle.

Make sure your smoke alarms are working. Test them by pushing the test button.

“Everybody is pretty generous because they know it goes for a good cause,” Ferguson said in unison with Lashmett.

Ferguson said the Thanksgiving dinners are a way for people to show their appreciation and support the spouses whose significant others may be deployed abroad for months at a time.

“It gets lonely. Being a military spouse, some of us don’t have friends or family around, so just being alone around the holidays is hard,” Ferguson said. “Something like this actually brings some cheer to you, knowing there are support organizations out there that want to give back to the military. SCMFO wanting to do this for our military and their families makes a huge difference and helps us out as spouses.”

Erin Cash, a spouse of a Marine who works on base, came to the event last year for the first time with their two children.

“It’s really nice, and it’s great that they’re able to provide this for us,” Cash said. “I know a lot of families don’t get to go home for the holidays so you’re stuck making all this for your family. Buying all this is a bit much.”

“It’s a simple gesture, but it means a lot to them,” Ferguson said.

Boy Scouts of America troops from Laguna Niguel also volunteered during the giveaway.