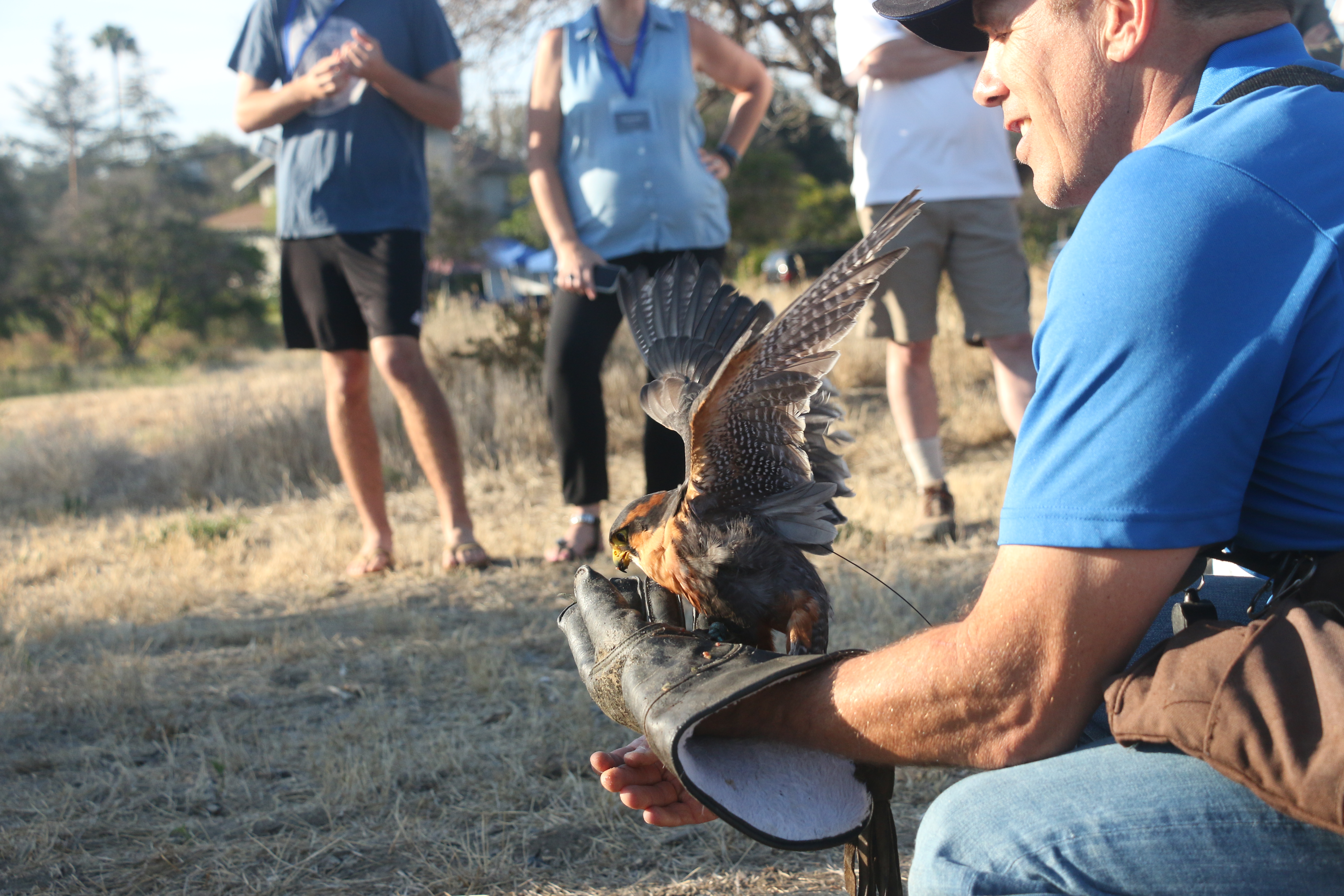 Seagulls were everywhere; the occupation outnumbered the trained falcon about 300 to one.

As it was released from its master, the falcon shot out toward the nuisance birds and they rapidly ascended in terror.

The falcon had done its job, it seemed—but then it took off and left Adam Chavez to search for it.

“The bird had transmitters on it, and we had to chase it for three days,” Chavez said. “I found the bird, climbed to the top of this hill and tried to get it, and he took off again.”

The bird Chavez was chasing was not one of his own, but he was eventually able to find the falcon using GPS.

Chavez, who owns Adam’s Falconry Service, has been working with falcons and other birds of prey since he was 12 years old. In Nevada, he became the youngest master falconer at the age of 18.

“My dad had mining property in Reno and Carson City, and as kids we used to go hunt and fish. One day we happened to find a nest of kestrel falcons that we thought were abandoned,” Chavez said. “We took them home and realized you had to have a license. We turned them over to Game and Fish, but luckily one of the kids that was with me that day was the (Nevada) governor’s son.”

After getting the falcons to the proper authorities, Chavez developed a keen interest in training falcons.

“I just like animals, and the birds were just awesome,” he said.

Young birds that are not prepared for the duties of ridding seagulls can be a problem. Chavez said the attrition rate is high for falcons in their first year or two due to getting caught up in fights with other birds or problems with their upbringing.

“Sometimes the seagull will try to bait your bird and fly him into stuff,” he said. “There’s lots of obstacles. It’s dangerous. Everything they’re trying to chase will use every trick they can so they can get away.”

Click Here for Extensive Information on Adam Chavez and Falcons

It can take some time to train the birds.

“One bird we had took longer than normal, and we started training her in September,” Chavez said. “Some birds train really fast, but some take two or three seasons. A lot of times, guys will give up on birds and I’ll pick up those birds and work through their issues. But some of those are projects. You just have to keep pushing through.”

Chavez is able to call the birds on command through systematic responses. During an exhibition on June 3, people who attended were able to call the falcons to perch on their arms, coaxing them with a bit of quail meat.

“Being around the birds that I love, it’s just really a job that I really like,” he said. “Sometimes I don’t even feel like it’s work. There’s a lot of prep time that goes into it though.”

In order to become a master falconer and tender services, a license is needed and falconers must go through apprenticeships and additional training.

From 2000 to 2012, according to a city of San Clemente report, Poche Beach was listed in the top 10 of “Beach Bummers” by Heal the Bay, which tests water at beaches for various health standards.

Although the city established a water filter system for runoff into the beach, hundreds of seagulls would gather in the area because it attracted other food for them, and the excrement from the seagulls had raised the location’s bacterial levels above the state’s standards.

In 2013, Chavez was hired to try to get rid of the seagulls, and in 2014 Heal the Bay determined Poche was no longer a threat to human health. San Clemente City Council recently renewed his contract for another year.

California state law requires cities and water authorities to have mitigation plans in order to keep bacterial levels in public areas at a minimum.

The birds Chavez trains are not trying to kill seagulls or harm them. Falcons and hawks are trained to scare them off so they eventually become deterred from the area.

Before Chavez was contracted with the city, counterfeit plastic coyotes were brought in as a scarecrow. Before that, another falconer had tried the location but only used birds that were tethered down and couldn’t reach different areas of the beach, which didn’t help the situation.

“Every situation is different and you have to assess everything,” Chavez said. “They all come with their own issues. Poche is a small spot, so it’s really tough for a big falcon to fly in there and be safe. It’s even tougher for the hawks because they want to land on the railroad tracks.”

According to city documents, Adam’s Falconry services at Poche Beach costs $52,800 a year.

“I’m paying a falconer to be down there; you have to have general insurance,” he said. “You have to have workers’ compensation and you have to feed the birds, which can be $1.75 a day on some of these birds. Then there’s all the equipment, which doesn’t last very long down there.”

Birds also need to be taken to a veterinarian and are susceptible to getting ticks and other problems.

“One bird flew into a Mexican palm, and I had to take it to the vet,” Chavez said. “We have to pay for GPS systems, new hoods, gloves. Believe me, we’re not making a killing on that job at all. We may charge for six to eight hours, but you don’t see the hour or two that goes into preparing the bird and the drive time. The landfill is even worse.”

Chavez said he has about 17 birds in his fleet. He said he’s worked with animals as large as bald eagles and others, but falcons and hawks are his main animals.

“When we first started we were at Poche probably six or seven days a week, but now we’ve dropped down to about four days,” Chavez said. “It’s a seven-month, seasonal job. The crow abatements are year-round.”