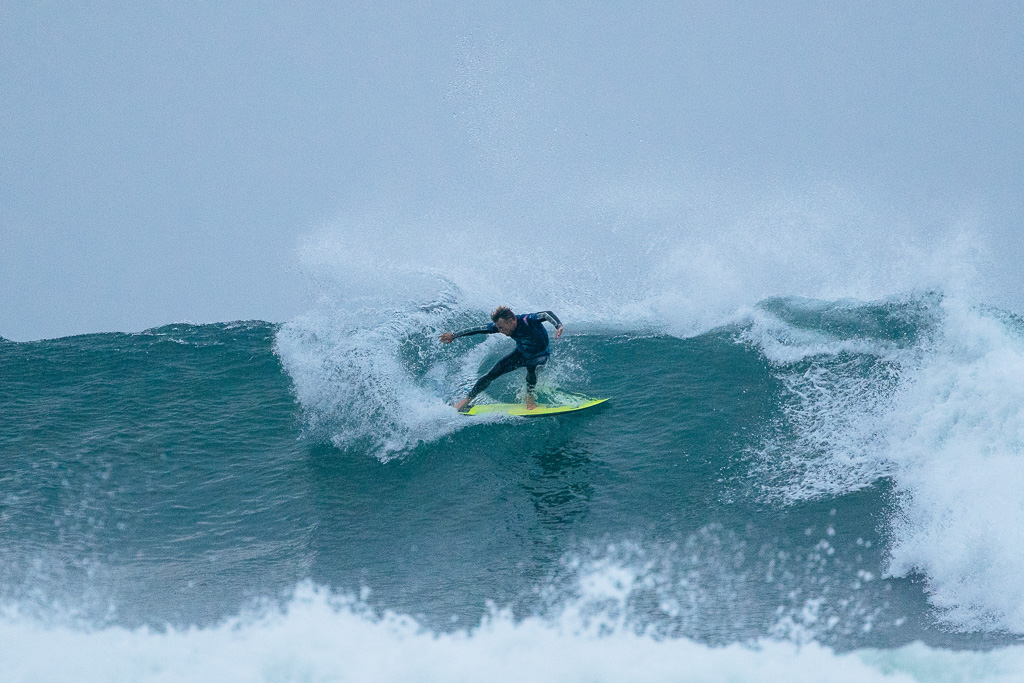 It’s going to be a heck of a year on the WSL Championship World Tour (CT). It wasn’t but a couple of weeks back that we were applauding young Griffin Colapinto for his epic 10-point ride at the Quiksilver Pro, the season-opener held at Snapper Rocks and Kirra Beach in Australia. The performance carried the 19-year-old rookie all the way to a third-place finish. This time it was Pat Gudauskas’ turn to get in on the action.

At the Rip Curl Pro at Bells Beach, the second stop on tour and the longest running contest in professional surfing, Gudauskas got going early and didn’t let down until he’d battled his way into a semifinal duel against world champ Mick Fanning.

One of the winningest surfers in the history of the sport with three world titles to his credit, the bowl at Bells is perhaps Fanning’s favorite spot on tour. Add to the equation that earlier in the year he announced this year’s contest at Bells would be the last of his storied career and that after 19 years on tour, he was ready to hang it up. Needless to say, all eyes were on Fanning at Bells.

En route to a respectable third-place finish, Gudauskas had the honor and privilege of surfing against him in one of his last heats.

“What an incredible week to celebrate the hero, the friend, and the inspiration that is Mick Fanning,” reflected Pat on social media last weekend. “Over the past week or two it’s been incredible to see what you mean to so many different people and for so many different reasons. For my brothers and me, the biggest thing I’ve learned from you is how you interact with everyone around you. Despite being the super hero competitor that you are, you are humble, gracious, and a true testament to the ability to overcome the many different challenges that life throws at you. For that you are the biggest inspiration to us.”

Fanning ended up beating Gudauskas, but in the end it mattered little. Gudauskas had scored his personal best result on tour, solidifying his spot on the WSL rankings. But more than that, he got to be a part of history.

“This event marks a career highlight for me,” Gudauskas continued. “In terms of results, it was my best result on the CT, but more than a result or a finish was the feeling that came with this week. To feel that energy and confirm what I had been working towards—a place of performing freely and with fire—it’s why I love surfing on the big stage and why we all work hard towards our goals in life so that we can be in the moment and enjoy the opportunities that present themselves. To surf that heat against my hero and friend Mick was probably the sickest experience. I will never forget it ever. I’ve pretty much been floating with stoke since that heat ended.”

Fanning also reflected on his career at the famed surf break.

“I always said I wanted to finish the year up here at Bells,” said Fanning, who counts a Lower Trestles title among his career accomplishments. “It has been incredible to see all the support in Torquay and the support of the fans. This is my 20th year of coming down to Bells Beach, and to all the people surfing in this event, it was so much fun. Seabass (Sebastian Zietz), Paddy Gudang (Patrick Gudauskas), Wilko (Matt Wilkinson), Owen (Wright)—every time I paddled out, I felt like I was going surfing with a mate, and that was really special.”

Next on tap for San Clemente’s Gudauskas, Colapinto, Kolohe Andino and the rest of the WSL’s cast of characters is the third and final stop of the tour’s Australian leg at Margaret River. At the moment, Surfline is forecasting a solid southwest swell to hit the area over the weekend, which could get the contest off in some legit surf.

The setup at Margaret River’s Main Break is a reputed big-wave zone in Western Australia, and after surfing a handful of Big Wave Tour contests, Gudauskas is fired up to keep the vibe alive. Other venue options include The Box, which is a dangerous “slab” wave that breaks in exceptionally shallow water; and North Point, which is a perfect, running, right-hand barrel. Surfline noted that the contest getting underway at North Point is “possible.”

The Margaret River Pro runs from April 11-22. Tune into www.worldsurfleague.com for more information, updates and to watch all the action unfold live.