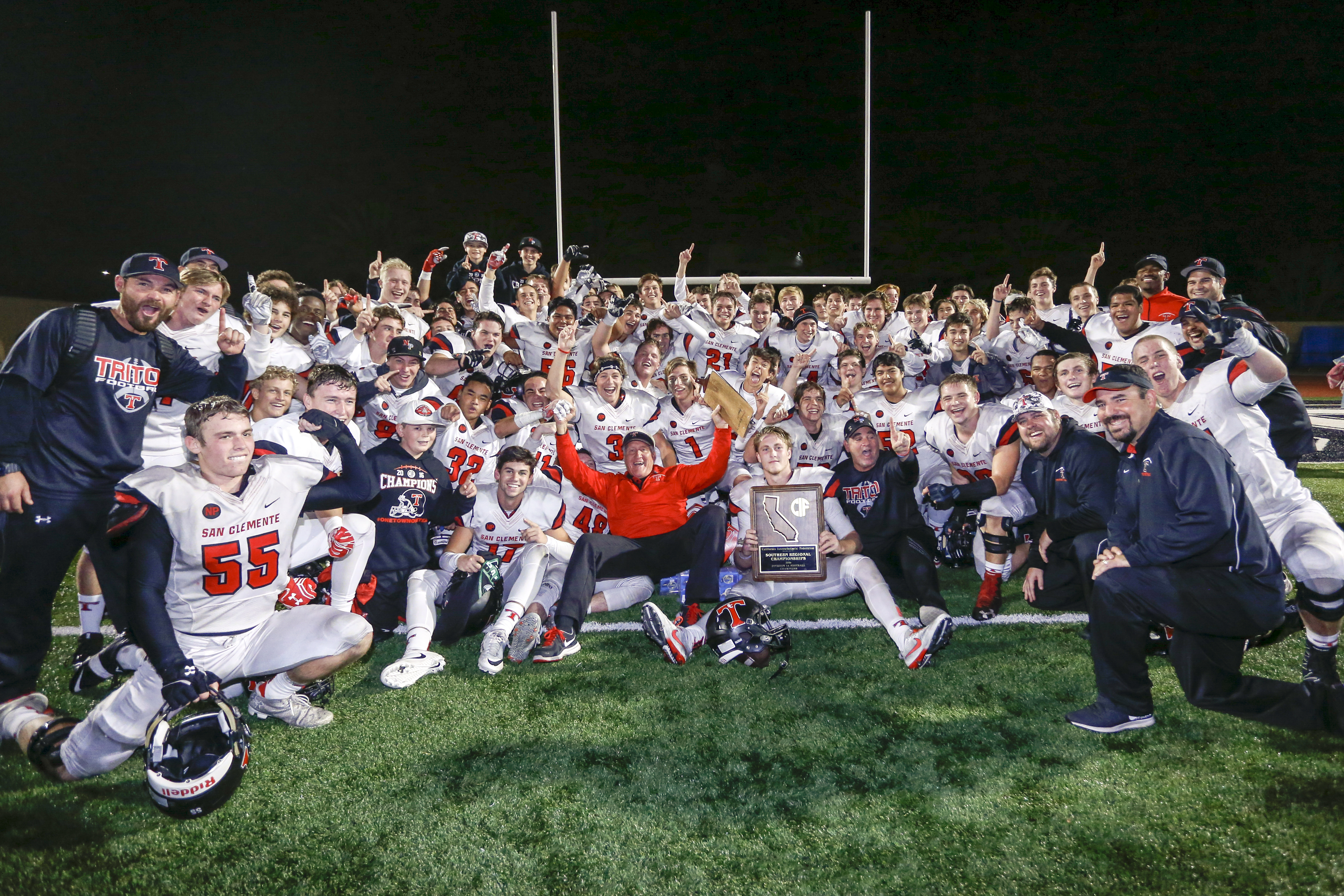 There is always music spilling out of the speakers at Thalassa Stadium when the San Clemente High School football team is practicing. As the Tritons, who are preparing to play their program-record 16th game this Saturday night, practiced earlier this week, their playlist fittingly landed on 2Pac’s iconic hip hop song “California Love.”

So far this season, San Clemente has shown it knows how to keep its season rockin’.

By storming past Edison last week in the CIF Division 1-A Southern Regional, the Tritons will now play for the biggest prize in California—a state championship.

From Oakland to Sac-town, the Bay Area and back down, it’s just the Tritons and their opponent, Del Oro of Loomis, that have stayed untouchable in the postseason, like Eliot Ness. The Division 1-A championship game will take place at Hornet Stadium at Sacramento State University on Dec. 17 at 4 p.m.

The game will be just a short 30 minute drive for Del Oro (13-2), which is appearing in its second consecutive CIF State Bowl Game. The Golden Eagles are the reigning CIF Sac-Joaquin Division 2 champions and CIF State Division 2-AA champions.

Del Oro is on an 11-game postseason winning streak that dates back to last season, and they have a potent offense that has outscored opponents 275-52 in five postseason games.

But the Tritons (12-3) enter the contest with an impressive resume of their own, and earned a berth in the title game following a Division 1-A Southern Regional contest that no one will soon forget.

The game featured five lead changes, and both teams combined to score five touchdowns in the decisive fourth quarter.

After Edison’s EJ Ginnis intercepted San Clemente quarterback Jack Sears and returned it for a touchdown to put the Chargers up 35-32 with less than five minutes to go in the game, the Tritons responded with a poised, clinical offensive drive.

Sears and the Tritons offense marched downfield, converting on two crucial fourth down situations to keep the drive alive. A big pass-play from Sears to tight end Isaac Rex put San Clemente down at the one-yard line, and senior Brandon Reaves punched in a touchdown run one play later to take the lead for good at 39-35.

For the second consecutive week, the Tritons defense held off a high-flying offense on its final drive to secure the win.

“It was probably one of the most emotional and physical games we’ve been a part of as a team,” Sears said of the Edison game. “It was a testament to our character, our coaching staff, and how we all band together no matter what’s going on. We’ll fight to the end.”

It’s hard to overstate just how good Sears has been throughout the Tritons’ postseason run. He’s thrown 14 touchdowns to two interceptions and is averaging just over 101 rushing yards per game. He is very accurate and has a strong arm, and he is one of the team’s unquestioned leaders.

He’s also money in the clutch.

Following the Edison game, head coach Jaime Ortiz recalled how Sears was the epitome of calm and collected after the late interception that gave the Chargers the lead.

“I pulled him up the sideline and said we have to go out there one more time and he said, ‘You got it coach, we’re going to finish this,’ and that’s what he did,” Ortiz said. “As a quarterback, you have to have a short-term memory, and Jack’s very resilient.”

The hard-nosed San Clemente defense has also made its presence felt in the postseason. The Tritons defense has held all five of its postseason opponents to well under their season scoring averages. The group has produced seven turnovers in the playoffs as well.

The Tritons will have to be sharp on defense yet again when they take on Del Oro.

The Golden Eagles are led by senior quarterback Stone Smartt (2,862 yards, 29 touchdowns) and a pair of 1,000-plus-yard running backs in Dalton Gee and Camiron Davis. The team’s biggest weapon might be receiver/defensive back Mason Hurst, who has corralled 69 catches for 1,489 yards and 17 touchdowns.

The Del Oro defense has yet to yield more than 16 points in the playoffs.

“You can tell they’re a well-coached team,” Ortiz said of Del Oro. “They’re a very meat and potatoes type of football team. They’re blue collar, and their kids play hard.”