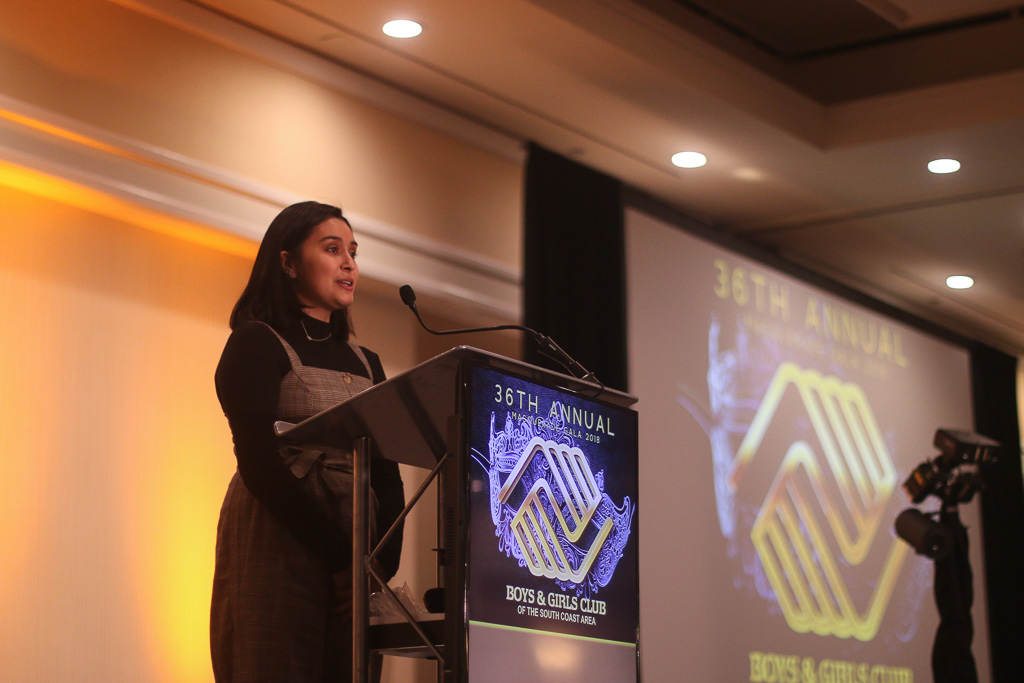 Standing at the podium in front of a crowd of hundreds of people, Karmen Canizales spoke about how the Boys & Girls Club of the South Coast Area helped guide her away from a deteriorating life.

Canizales, the club’s Youth of the Year for 2018, admitted she wasn’t the biggest fan of the club when she first started attending.

“On my first day, I was hit in the head with a basketball, and I missed my mom,” Canizales said, although when she got older she started to warm up to it. “I was given leadership opportunities when a staff member, named Veronica, invited me to become a member of the Torch Club (a teen program at the Boys & Girls Club). I was taught to be an honest leader.”

Karmen Canizales, the 2018 Boys & Girls Club of the South Coast Area Youth of the Year, speaks at the Great Futures Gala on Oct. 20. Photo: Eric Heinz

A masquerade ball was the theme of this year's Great Futures Gala for the Boys & Girls Club of the South Coast Area. Photo: Eric Heinz

A masquerade ball was the theme of this year's Great Futures Gala for the Boys & Girls Club of the South Coast Area. Photo: Eric Heinz

Canizales said her leadership training gave her the skills to take on adverse social situations, notably when one of her friends tried to convince her to take illicit drugs.

“I decided to pull myself away from her, and she ended up leaving the Boys & Girls Club,” Canizales said. “I have a very special bond with my club, but there have been many changes in the last few years that caused my friends to leave. Nothing’s stopped me from going.”

Canizales said she later joined the College Bound program that helps students who are dedicated to attending secondary education. It allowed her to tour colleges and inspired her to take her education seriously. Canizales is currently a freshman at San Francisco State University.

The Boys & Girls Club of the South Coast Area’s annual Great Futures Gala, hosted this year at the Laguna Cliffs Marriot in Dana Point, is the largest event of the year for the club and helps fund many of its programs. The Youth of the Year is selected by staff of the BGSCA. The criteria are standard of character, academic achievement and community service.

The BGSCA annual gala raises about 15 to 20 percent of the club’s annual $1 million operating budget. The gala this year raised more than $160,000, according to Boys & Girls Club officials.

Boys and Girls ClubGalaOrange CountySan ClementeYouth of the Year
sharing